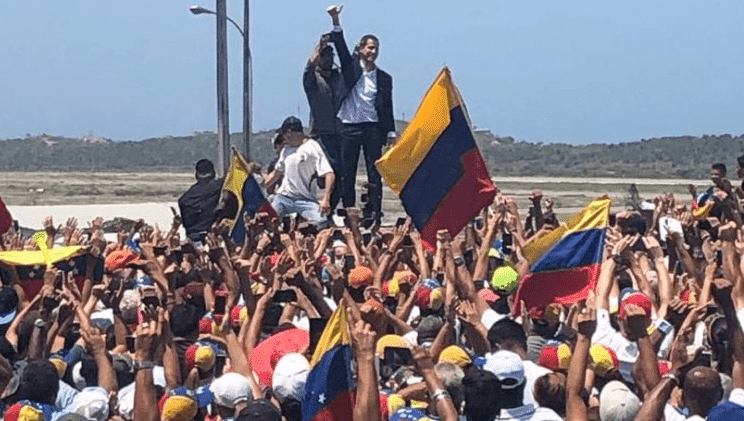 The self-proclaimed “Interim President” of Venezuela, Juan Guaido, after a south american tour sponsored by the US Department of State visiting Colombia, Brazil, Paraguay, Argentina and Ecuador, has just passed migration control in the Simon Bolivar International Airport near Caracas. In the tweet below from @telesurenglish the right wing deputy can be seen freely and without pain passing the border control to enter what he and his superiors in Washington called a dictatorship.

It is more than evident that the list of crimes of this character is getting longer, the last one being exiting the country despite having a Supreme Court restriction to forbid him to do so. That is the reason so many chavistas wish to see him behind bars but Maduros government  (called authoritarian by so many even in the left) has been very clear indicating that the legal process against Guaido is active and it is in the hands of the Judicial Branch.

Eventually this obscure character in Venezuelan politics is going to receive the call from the Venezuelan justice system. You can see Guaido exiting the airport in the tweet below from @ActualidadRT. The self-proclaimed president is at this very moment addressing the right wing activists in Las Mercedes neighborhood in Caracas.

Chavista influencer, Luigino Bracci, posted on his twitter account the following: Guaido being detained = Dictatorship, Guaido not being detained = the government is scared, but the only argument the right wingers have to support that Venezuela is a dictatorship are the breast of Oriana (hard to explain but you can always google it).

US VP Mike Pence posted today a tweet making clear that the US government will not tolerate his puppet being harassed entering Venezuela. The truth is that this criminal just entered the Venezuelan dictatorship and is giving a speech in front of hundreds of right wing sympathizers in the middle of Caracas, the capital of this terrible dictatorship.

.@JGuaido’s safe return to Venezuela is of the highest importance to the U.S. Any threats, violence, or intimidation against him will not be tolerated & will be met with swift response. The world is watching – Interim President Guaido must be allowed to re-enter Venezuela safely.