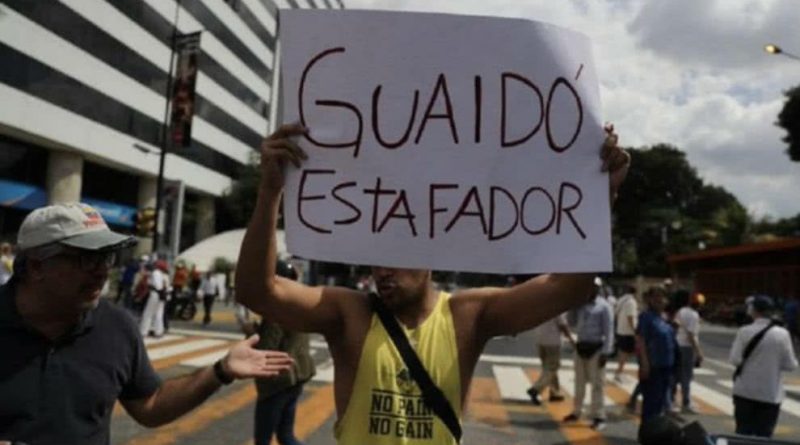 This Saturday, November 16, an anti-Chavista identified as Carlos Caballero was attacked, booed and pushed by a group of anti-Chavistas who concentrated in the Altamira square, Chacao Caracas municipality after rejecting the actions of right-wing leadership.

“I strongly disagree with the politicians who continue to deceive us. I am an ordinary Venezuelan and I have been disappointed with this left-handed policy. It cannot be that the leadership does not have the conscience,” said the man while some of those present criticized his position and called him “Chavista” trying to insult him.

#CarlosCaballero an anti-Chavista critic is being harassed by his own for criticizing the opposition leadership. This is the pick of today’s anti-chavista demonstration…they are on their way now to the Bolivian Embassy to support yesterday’s massacre, we believe. https://t.co/ODt2ny9vIo

“It’s a Chavista, it’s a thief,” “don’t waste your time with this idiot,” were part of the expressions thrown at him. People in social media expressed concern for his integrity, this wont be the first time anti-chavistas lynch people.

This Saturday followers of the Venezuelan opposition concentrated in some parts of Caracas after the call of the deputy Juan Guaidó for a new D-day that ended up in nothing and sending the few in attendance to protest in front on the Bolivian Embassy in Caracas. Yes, after the Massacre in Cochabamba by the coup plotters in Bolivia yesterday.

This is the banner brought by anti-Chavista #CarlosCaballero to today’s demonstration that is pushing the hashtags #GuaidoEstafador and it almost got him lynched by their own. pic.twitter.com/GVlyavNotW

After this incident “Carlos Caballero” and “Guaido Estafador” (“Guaido Crook”) became trending topic and remain there as we write this note, becoming the most relevant news for anti-Chavismo today when the most extremist, again, thought they were going to finally have their D-day for good.

This was encouraged from Washington, from several US imperialist factors like SOUTHCOM, Mike Pence, among others. But again they crash into Venezuelan reality that -at this point- is looking for ways to reconcile without external intervention.