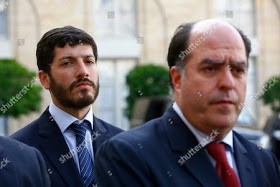 Roberto Patiño, appointed by Juan Guaidó as coordinator of the volunteers who intend to distribute the “humanitarian aid”, is the son of a high official of Empresas Polar, the largest food and beverage distribution corporation in Venezuela.

This is Marisa Guinand , general director of Polar Brewery and one of the main spokespersons of the organization chaired by Lorenzo Mendoza Giménez.

Paradoxically, Polar handles nearly fifty brands of high-demand food products, such as PAN cornmeal, whose absence on the shelves is used as supposed proof of the existence of a “humanitarian crisis”. Roberto Alfredo Patiño Guinand is 30 years old and is an activist of the Primero Justicia party and very close to Julio Borges, its main public figure who fled the country a year ago and is connected to the assassination attempt with drones against President Maduro.

In September of 2017 Patiño Guinand accompanied Borges on an international tour of the European Union to request governments apply sanctions against Venezuela using the existence of a humanitarian crisis as an argument. Participants included Freddy Guevara , from Voluntad Popular, and Eudoro González Dellán , brother of Leonardo González Dellán, former president of the liquidated Banco Industrial de Venezuela. The politician has promoted a public profile that highlights his activity as a collaborator with the NGO Alimenta La Solidaridad, aimed at creating soup kitchens for children in popular communities in Caracas.

He was also the promoter of another “project”, called MiConvive, which says look for solutions to security problems along side young people from popular sectors.

Patiño Guinand is a production engineer graduated from Simón Bolívar University and between 2015 and 2016 he completed a master’s degree in Public Policy at the Kennedy School of Government of Harvard University.

It is worth noting that Kennedy School is the main training center for political leaders serving the business groups of the world. There studied Leopoldo López, founder of Primero Justicia and then Voluntad Popular.

It should also be noted that at Harvard University the economist Ricardo Hausmann is an intellectual, who drives a neoliberalization program for the Venezuelan economy that aims at an accelerated privatization of public assets and reduction of the State.

In 2015 a conversation between Hausmann and Lorenzo Mendoza  (head of Empresas Polar and Patiño’s mother) was revealed in which he confessed to being “at war” when referring to the commercial strategies of his corporation.

The opposition plan aimed at evicting President Nicolás Maduro from the government is based on a triad that includes the creation and positioning of a “humanitarian crisis”, the concept of “responsibility to protect” and finally the execution of actions on the ground through the so-called “humanitarian intervention”.

The group whose coordination Guaidó assigned to Patiño is called “Voluntarios X Venezuela” and aims to identify and organize people inside and outside the country to provide logistical and propaganda support to the distribution of aid that the US has been staking in the Colombian city of Cúcuta for the last two weeks.

The contradictory results of Patiño’s action to promote financial sanctions and a commercial blockade against his country, while installing a few soup kitchens to supposedly feed the children affected by these actions, are not surprising.

It is also appropriate to point out that since its formation Primero Justicia was related to the business elite and specifically to Empresas Polar. In fact one of the seven young founders of the group, Guillermo Bolinaga, is the director of legal affairs of the group, while Leopoldo López Mendoza (today in Voluntad Popular) is the cousin of Lorenzo Mendoza’s wife, María Alexandra Pulido Mendoza.