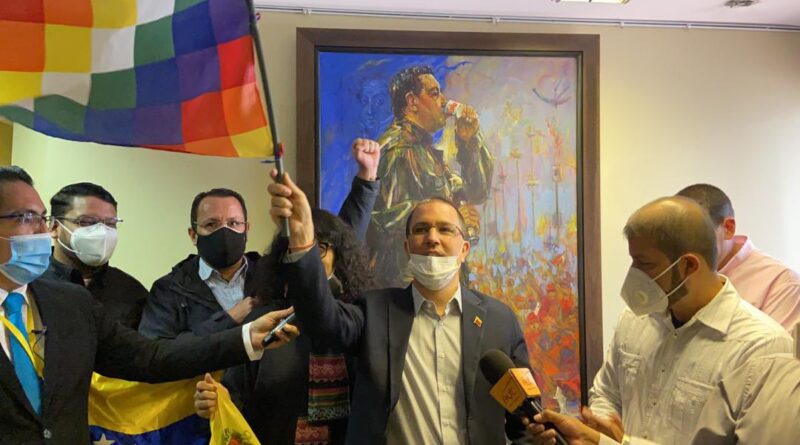 The Foreign Minister of the Bolivarian Republic of Venezuela, Jorge Arreaza, on Monday formally announced the recovery of the embassy of his country in La Paz, Plurinational State of Bolivia, resuming bilateral diplomatic relations after a team appointed by Juan Guaidó had illegally occupied the diplomatic headquarters for one year. Likewise, Arreaza ratified Alexander Yánez as the new Venezuelan ambassador to Bolivia, appointed this Sunday by President Nicolás Maduro. On TV and social media, images of Arreaza’s entry were shown this Monday, coinciding with the return of former President Evo Morales to the nation.

Members of social movements and political parties gathered around the embassy in solidarity and support of the Venezuelan people who recovered their diplomatic headquarters. This crowd received Foreign Minister Arreaza.

Immediately afterwards, the Foreign Minister removed a photograph of Juan Guaidó hanging on the embassy wall, placed it on the floor and in its place restored an emblematic painting of the Liberator Simón Bolívar. He did the same with a beautiful painting of Commander Hugo Chávez, which was protected by diplomats last year when the coup was perpetrated against Evo Morales and the de facto president, Jeanine Añez, recognized Guaidó as the so-called “interim” Venezuelan president.

La Paz: Foreign Minister of Venezuela @jaarreaza takes down the portrait of ventriloquist dummy Juan Guaido, replacing it with Simón Bolívar. A victory for our continent. @madeleintlSUR pic.twitter.com/8XjWm34qqF

“With great pride we report that we have peacefully recovered what belongs to the Venezuelan and Bolivian people and the peoples of the world: the embassy of the Bolivarian Republic of Venezuela. Thanks to the Bolivian people, who gave victory to the MAS, the social movements, David Choquehuanca, Luis Arce, and Evo Morales, thanks to them we are here taking back what belongs to the people,” Arreaza emphasized.

Later, Arreaza also showed the state in which they found the embassy, ​​noting that household appliances, beds, a refrigerator, televisions, computers and works of art were stolen by representatives of the self-proclaimed president Juan Guaidó.

According to Arreaza, the “usurpers,” led by the alleged diplomat José Gregorio Cumare Hernández, entered “by force” a year ago and “dismantled” the consular space. “They took books, computers, works of art. Even the bust of the Liberator was stolen,” he denounced. “Here there is not a computer, not a pen, a server, a stamp, a painting of Bolívar,” said Arreaza, who added that, on behalf of President Nicolás Maduro and the Venezuelan people, all consular space will be recovered.

For the foreign minister, what happened at the Embassy is similar to what Guaidó wants to do in Venezuela. “This is what they intend to do with our people, loot it, dismantle it,” he said.

Evo Morales, in parallel, stepped on Bolivian territory this Monday after crossing the international border at La Quiaca-Villazón, accompanied on the Argentine side by the president of that nation, Alberto Fernández, and by Álvaro García Linera, who was vice president of Bolivia during Morales’ administration, and a massive concentration of people.

With this step, the so-called Great Popular Caravan began, which will travel with Morales by land more than 1,100 kilometers and will cross three departments (Potosí, Oruro and Cochabamba), until it reaches the Chimoré airport next Wednesday, November 11, Telesur reports.

The recovery of the Venezuelan embassy in La Paz are part of the immediate changes in foreign policy by the government of the new Bolivian President Luis Arce, who not only announced the reestablishment of relations with the Government of President Nicolás Maduro but also with Cuba and Iran.

Arreaza was in La Paz where he attended the inauguration ceremony of Luis Arce, after the diplomatic break created in November 2019. The coup that removed Evo Morales from the Quemado Palace at that time launched an international offensive that included the interruption of diplomatic ties with countries such as Cuba and Venezuela.

In the afternoon a new video was posted on Twitter documenting the moment Guaidó’s portrait was put in a garbage bag and dropped in a dumpster.