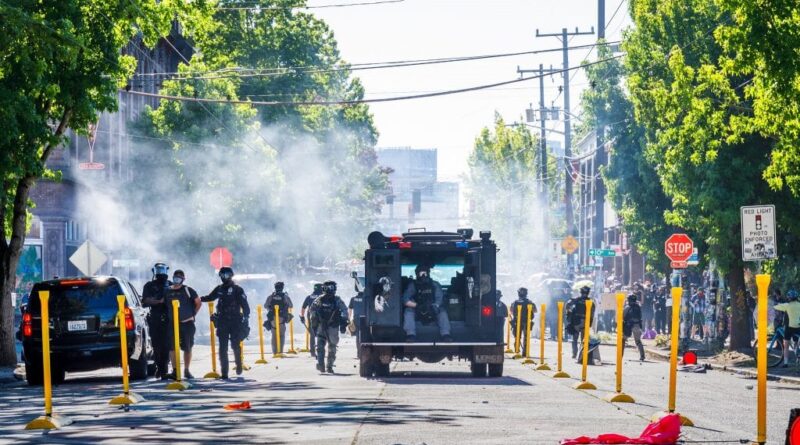 As the recent election has shown, anti-communism is alive and well in the United States. Donald Trump and other conservatives used “socialism” as an epithet to discount and dismiss progressive candidates and policies and raise the hackles of conservative and fearful Americans to great effect. Describing Joe Biden and Kamala Harris as socialist and accusing them of fomenting disorder in America’s urban areas invoked racial disorder for the majority white voters who cast their ballots for an avowed white supremacist. As Charisse Burden-Stelly has argued, anti-communism is anti-Black. In her analysis of W.E.B. Du Bois’s peace activism, Burden-Stelly argues that “Radical Black Peace Activists” were accused of being engaged in “Soviet-backed subversion.” Anti-communists used the full powers of the state, in violation of constitutional principles, to silence, imprison, or deport radical Black activists. Law enforcement also targeted Communist Party (CPUSA) members using minor offenses to try and harass and silence their efforts. In 1951, communist youth leader Roosevelt Ward was arrested for failing to change his address, an alleged violation of the Selective Service Act. He was found guilty and sentenced to three years, and the CPUSA immediately mobilized a movement in his defense.

Ward was born on a sugar plantation in Burnside, Louisiana, in 1928. By the time he was a teenager, he was working on the docks in New Orleans while attending high school. After graduation he went on to Wilberforce University and then the University of Michigan. It was in Detroit that Ward was introduced to radical politics and the potential to live outside of Jim Crow restrictions, which led him to become a leader in the Labor Youth League (LYL). In 1948, Ward worked on the Wallace campaign in his home state and in 1949, he was the LYL representative to a Youth Congress in Budapest. When he returned to the United States, Ward moved to Harlem and became the LYL Chairman there.

In 1950, Ward published a pamphlet, Toward Bright Tomorrows, on his experience at the Youth Congress and the global devotion to peace. As Burden-Stelly argues, anti-communism was so powerful that harmless ideas like “peace and progress” could be transformed into treasonous conspiracies requiring “discrimination and discipline.” The pamphlet described the work of radical youth globally, but also discussed their commitment to the peace movement, a movement that U.S. intelligence linked to the Soviet Union. Ward also made his anti-capitalism clear. In the Youth Congress reports, he argued that the situation for youth in the Soviet Union, Eastern bloc, and China was one of opportunity, while in the capitalist countries youth faced the “deterioration of working conditions” and a drive towards war at the expense of peoples’ needs.

The Cold War peace movement was specifically critical of the American containment policy that devoted tax-payer funds to military build-up and American citizens’ bodies to endless war and carnage. Ward described the American delegates as “ashamed and self-conscious” as other countries criticized American policy. But Ward was clear that the U.S. government did not represent them, but only represented the “decadent few” who sought to “own and control” the U.S. and to profit off war and destruction. Ward and other activists in the CPUSA argued that the Cold War benefitted war profiteers while the US military conscripted Black men to fight wars against people of color abroad. The peace movement was internationalist in perspective, and it recognized that anti-communism was another tool to maintain global white supremacy.

Ward’s criticisms would not go unnoticed nor unpunished. In 1951, he was arrested in Louisiana for failing to tell the local Selective Service board his new address in New York City. Ward would later say that he did give an address, only that it was the LYL address and not “a series of constantly shifting rooming boards.” He was arrested, tried, and sentenced to a three-year prison sentence. The Civil Rights Congress (CRC) and its attorneys moved to appeal Ward’s conviction while prominent CPUSA leaders began publicizing the case and agitating for Ward’s release.1

The CRC and its attorneys were very busy in the early 1950s defending several CPUSA leaders in the courtroom. One of the Party’s favorite tactics was to draw attention to the cases and the egregiously unjust persecution of its members. Some felt the mass agitation technique drew too much attention and hostility, particularly in the South, but it did manage to keep people’s attention on these cases and demonstrate the unconstitutional nature of anti-communist prosecutions. In September 1951, a rally was held in New York to raise funds for Ward’s defense. Speakers included William Patterson, head of the CRC, Claudia Jones, and greetings were read from the popular entertainer and activist, Paul Robeson, all of whom were also dealing with legal harassment. Patterson went directly to the heart of the issue when he told the audience that Ward was “framed” because he didn’t believe loving his country also meant the “murder and pillage [of] the colored peoples of the world.” Patterson warned that silencing youth leaders was trying to blackmail the youth into “accepting war and murder.”2

Jones called Ward a “flaming symbol” of the youth movement and she urged youth to continue their opposition to the Cold War policy, particularly the Korean War. Jones argued that Ward’s conviction was based on the same unconstitutional Smith Act that she was facing jail time under. She told the crowd that the mere fact that the United States continued to prosecute people under it justified legal harassment of activists. Robeson’s remarks, read by author Lorraine Hansberry, called Ward a “giant” in the Black Freedom Struggle.3

Ward’s case was appealed to the Louisiana court of appeals where he lost. Eventually his case was heard by the Supreme Court and his conviction was overturned. In a later interview Ward displayed some faith in the justice system, arguing that the Supreme Court decision showed that Black youth could not be muzzled by “jim crow draft boards.” He believed that his arrest and conviction were “clearly” about his antiwar work, but he also argued that in his case, the motivation was obviously racist. He likened draft regulations to vagrancy laws, in that both compelled the “submission” of Black Americans in the face of discrimination and oppression. Vagrancy laws, he claimed were similarly used to push Black youth into “forced labor and starvation pay.” The threat of arrest and imprisonment was meant to silence Black voices against taking “militant stands” for equality and against militarism.4

Ward’s experience reflects Burden-Stelly’s analysis that Radical Black Peace Activists recognized the connection between dismantling white supremacy and the war state. America’s global supremacy depended on the submission of nations of color while simultaneously demanding consensus among Americans. Those that spoke out faced harassment and possible imprisonment on trivial charges, including not changing an address. Ward hoped that his case would draw attention to that connection; that Black American freedom was linked to ending the Cold War, and particularly the hot war then being fought in Korea. He noted that while he spoke about his case in New Orleans churches, his audience recognized that the same people urging war against people of color abroad were the same people denying them the right to vote, the right to a decent job and living, and protection from lynching. He became a scapegoat for capitalists who wanted to brand him a “draft evader” and all Black youth “unpatriotic.”5

Ward noted that his audience was also proud when he detailed how he won his case in the Supreme Court. He advocated ending the draft to ensure that no more Black bodies were conscripted in a war against people of color abroad. For Ward, military service was not a means to win respect or convince white America that Black Americans deserved equality, War perpetuated inequality and white supremacy. Anti-communism was the tool that was used to try to silence him, but war was the means to justify that silence. Ward and his contemporaries, including Jones, Patterson, and Robeson, recognized that the war state was an oppressive state and that it marked aspirations of freedom and equality as dangerous. Nearly seventy years later, the United States has only been free from military conflict only a handful of those years; meanwhile the welfare state has been eviscerated, civil rights legislation gutted, and discussions about ameliorating poverty dismissed as socialism. The fears of Cold War era activists have come to fruition, and accusations of communism and socialism have become a trigger for white America to dismiss the needy and oppressed.

Dr. Denise Lynn is an Associate Professor of History at the University of Southern Indiana. Her research centers on women in the American Communist Party during the Popular Front. Follow her on Twitter @DeniseLynn13.