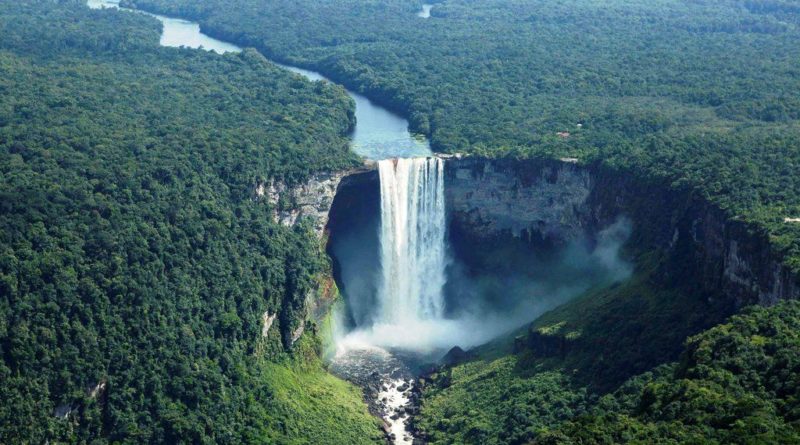 The International Court of Justice in the Hague has begun the debate to decide whether it has jurisdiction to deal with the request of Guyana with respect to the territory known as Esequibo, which is disputed with Venezuela. What is behind this request? Why is it occurring now and what is does the dispute concern?

The United Kingdom was one of the largest colonial powers in the recent past. It made and unmade maps, borders, divided nations, left promises, conflicts and pain – and carried away riches. Latin America did not escape its maneuvers of assault and robbery, economic deceptions, always or almost always supported by the elite few in each of the respective countries.

“The British expansionist strategy left a collection of enclaves implanted in the American Continent, in a way intended to assure their control,” Alejandro Fleming, ex-ambassador of Venezuela to the European Union, Belgium, and Luxembourg, and international relations scholar, explained to Sputnik News.

One of these enclaves has been the subject of dispute by Venezuela for more than a century. Before it was an enclave, it was a robbery: The United Kingdom took a territory belonging to the newly emerging Republic of Venezuela. The shifting of the borderline in favor of the colony of the Empire, British Guayana, was progressive: 1835, 1840, 1887, 1897.

In 1899, the Tribunal in Paris took place without Venezuelan participation. There the border boundaries were established giving the British advantage. The South American Republic of Venezuela lost 159,000 square kilometers of territory on the eastern border, in the so-called Guayana Esequiba or the Esequibo, named for the river that marks the border than Venezuela disputes.

“Venezuela disputed the decision of the tribunal from the moment of its declaration, and, since the 1940s, intensified the procedural efforts to renew the claim to the Esequibo,” explains Fleming.

This claim reached a key point in 1966, with the Geneva Agreement between Venezuela, Great Britain, and the then-British Guyana, in which the existence of a territorial conflict was acknowledged. “The simple signing of this Agreement represents an express recognition of the fact that the 1899 Arbitral Award was invalid.”

Thus, a few months after this Agreement was signed, when the Cooperative Republic of Guyana, now independent of the United Kingdom, was founded, it was quite clear that part of the territory of the new republic was in dispute. This “pending controversy,” according to the terms of the Agreement, should be “resolved in a friendly manner that will be acceptable to both parties.”

This meant that, in view of the fact that there was no agreement on what would be the mechanism for a friendly accord, the decision concerning the method of resolution was referred to the Secretary General of the United Nations. That was what was indicated by the Geneva Agreement, and the method of the “good offices” (of the UN Secretary General) were resorted to between 1988 and 2018.

The conflict concerning Guayana Esequiba became tenser with the escalation of aggressions against Venezuela. A time-line shows that, in the period since Nicolás Maduro became presiden in 2013 until the present, there have been a whole range of destabilization methods used to weaken Venezuela.

This delicate setting was seen as an opportunity for Guyana to proceed in two central points. First, to award greater concessions in the disputed territory to transnational petroleum companies. One of the most important cases involves the U.S. company Exxon Mobil, which has carried out new discoveries of petroleum reserves.

And the second was to open an offensive to achieve their main objective: the recognition of the borders drawn in 1899, the Arbitral Award that Venezuela considers “null and void.” To pursue this, they decided to take the case to the International Court of Justice.

“Guyana took advantage of the current political situation of Venezuela to present their unilateral claim to the Court. This was based on the unfortunate decision by the UN Secretary General to choose judicial action as a means of resolving the dispute,” explains Fleming.

The conflict over the Esequibo passed in this way from the “means of the good offices” to the International Court of Justice, although, as Fleming notes, the Geneva Agreement does not establish that the parties to the dispute can present a unilateral claim or refer the disputed matter to the Court without the consent of the other government and Venezuela has not given consent for the International Court of Justice to rule on this case.

“The International Court of Justice is not acting in response to a decision of the Secretary General of the UN, Antonio Gutérrez, but rather based on the unilateral and baseless claim of the Guyanese government,” Fleming adds.

The first session of the Court took place by videoconference, approved especially for this hearing, on June 30.

The Court and the Goals

Venezuela does not recognize the International Court of Justice. “No State may unilaterally force our country to recognize the jurisdiction of the Court,” Fleming analyzes.

“Venezuela has never recognized the mandatory jurisdiction of the Court, neither ipso facto, nor by means of any special agreement. Nor has there been any binational agreement with Guyana that expressly establishes that the territorial conflict regarding the Esequibo should be submitted to the International Court of Justice, in the case of not being resolved by other means.”

Venezuela, although a signatory to the Statute of the Court, has maintained a historical position of never submitting affairs related to its independence, sovereignty, or territorial integrity (vital affairs) to any third parties, neither arbitrators nor courts; “even more so now that it has been the victim of countless efforts at looting,” commented the ex-ambassador.

Therefore the decision of the Venezuelan government has been to refuse to recognize and not to participate in the hearing that started on June 30. “The unilateral claim of Guyana is improper and the Court has no competence to deal with this affair.”

What the International Court of Justice must define is its competence to decide on the request of Guyana, which requests validation of the Arbitral Agreement of 1899 – that same decision considered “null and void” by Venezuela. This request ignores the fact that the Geneva Accord of 1966 declared the Arbitral agreement invalid.

Venezuela assures that it will not fall for “any sort of extortion” by Guyana. This is not the first time that the International Court of Justice takes on the question of its own competence; this is actually the 18th case since 1954 where that has been in question. Neither is this the first time that a party to the dispute that does not recognize the jurisdiction of the Court decides to not participate. “However, even when they have not participated, the governments of the states involved have sent their observations with respect to their national positions to the Court,” Fleming explains. Venezuela also did this on this occasion.

There are various hypotheses about what will happen, according to Fleming.

The Court may declare itself competent and deal with the validity of the Arbitral agreement and not with the territorial dispute. “In this case, the arguments that would theoretically have to be presented are those that confirm that the Arbitral Agreement is null and void. This possible scenario is, in my judgment, the worst for Venezuela. Up to now, no international tribunal has invalidated arbitration decisions regarding territorial disputes.”

The Court may declare itself competent, but may change or expand the subject matter of the proceedings. “It is possible that the territorial complaint may be addressed by the Court; Venezuela, and equally Guyana and Great Britain in its time, were always opposed to this.”

Fleming maintains that Guyana continues to oppose the idea that its border with Venezuela should be reviewed and redefined by the Court. “For this reason, they took the precaution of presenting a complaint that only seeks the validation of the Arbitral Agreement of 1899.”

The “most favorable possibility for Venezuela” is that the Court should declare that it is not competent and “should urge the two countries to resolve the territorial disagreement by other peaceful means of resolving controversies.”

Depending on the results, Venezuela has various options for its defense. It may invoke, for example, Article 98 of the Court Statute and file a claim for interpretation or invoke Article 99 and present an appeal for review of error, Fleming explains. “In both cases, the Court may declare the claim to be admissible, and even may decide to admit it upon compliance with the error in question, in which case it should issue a ruling decision to that effect,” he adds.

Another scenario is that Venezuela may refuse to recognize the error of the court. “In this case, it would be impossible to come to the negotiating table with Guyana to discuss the dispute, since Guyana would claim that the case was already decided and might even threaten to take it to the Security Council of the UN. “

We are dealing with a complex dispute in a period when Venezuela finds itself under attack on different fronts. Guyana is seeking to take advantage of this opportunity to validate the Arbitral Agreement that “was designed to meet the economic interests of Great Britain, at that time the most powerful nation, which was seeking to ensure control over the seas of the region and over the Orinoco River.”

The same thing is occurring today: behind the Guyanese move we find transnational interests, already located in the disputed territory and seeking to develop million-dollar investments.

For this reason one of the petitions of Guyana before the Court requests that the Court dictate that “Venezuela should not resort to force or the threat of force against any physical person or corporate body authorized by Guyana to carry out economic or commercial activities in Guyanese territory.”

Just as in the 19th Century, when the United Kingdom illegally expropriated part of Venezuelan territory, the dispute is again concerning the natural riches of the territory, which foreign enterprises and powers are trying to take over.