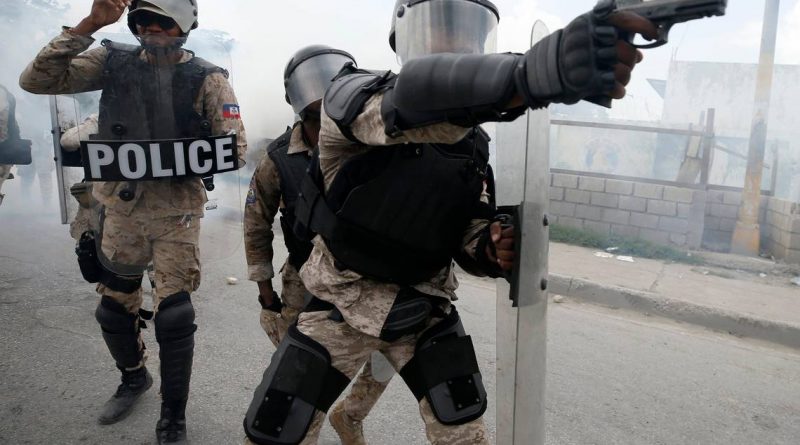 After two weeks of demonstrations by opposition groups in Haiti, the political and economic crisis in that country intensified on October 4, resulting in 17 dead and 189 wounded, in the midst of a paralyzed nation.

Anti-government protesters, who have redoubled their attack since mid-August against the security agencies, call for the resignation of President Jovenel Moise, blaming him for shortages of fuel and water shortages.

Jovenel Moise’s goverment, supported by the US government disregarding evidence of corruption connected to the Venezuelan Petrocaribe program mismanaged by groups close to him, has been accused of violently repressiong the protests. The opposition has called a new day of protests for this Friday.

RELATED CONTENT: Haiti: Jovenel’s Regime is Crumbling in the Face of Popular Fury

Ahead of Friday’s protests, Haiti’s National Network for the Defense of Human Rights reported that recent violent protests have left 17 people dead, and 187 injured, including two journalists who were shot. The human rights group accused police of using repressive tactics and called for an investigation.

On Friday, the massive protests in Port-au-Prince started peacefully but there were violent outbreaks according to radio reports when anti-riot officers with the Haiti National Police started firing tear gas.

The protests have kept the country paralyzed since September 16 and most days the barricades block the main avenues and roads of Port-au-Prince and other cities.

Drinking water is scarce since the protests against Moise broke out. Groups adverse groups to the President do get diesel to run their trucks that are used in protests while the health centers are facing a problem due to the lack of the vital liquid.

In recent weeks there have also been problems with the running water supply, because without fuel the engines and pumps of the distribution systems do not work, according to the National Directorate of Water and Sanitation (Dinepa), which has promised to restore the service this weekend, reported the news agency EFE.

Some news outlets have reported that the Dominican Republic government has requested an emergency UN Security Council meeting, in order to assess the serious socio-political and economic crisis in Haiti.

In the view of Miguel Vargas, Dominican Republic ambassador to the UN, the situation in Haiti has a negative impact on the Dominican Republic, which has been forced to strengthen the security of its borders while binational trade has significantly decreased in the border area, affecting populations in both nations.

Featured image: A police officer aims his weapon after demonstrators calling for the resignation of President Jovenel Moise broke through their lines, in Port-au-Prince, Haiti, Friday, Oct. 4, 2019. Rebecca Blackwell AP