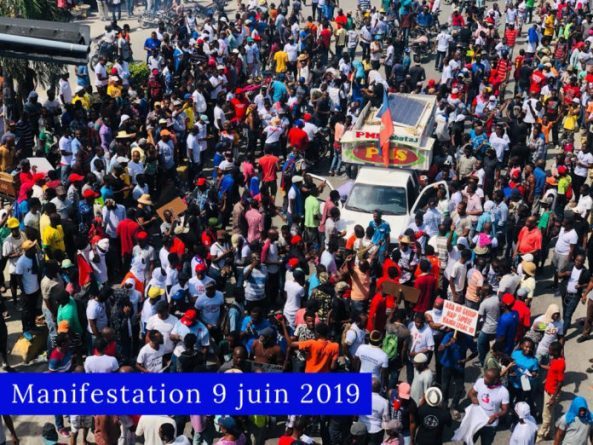 Thousands took to the streets in towns and cities around Haiti on Sun. Jun. 9 to demand President Jovenel Moïse’s resignation and the prosecution of those responsible for looting about $2 billion from the government’s Petrocaribe Fund.

In Port-au-Prince, after two buildings and several vehicles were burned, a police spokesman said gunfire killed two demonstrators and wounded four, and that a policeman was injured by a thrown rock. But opposition figures and radios reported at least seven killed and over 100 wounded by gunfire from police and government-aligned gangs.

“Two protestors were killed on the Champ de Mars, two in La Plaine, and another three in the area around Delmas and Belair,” said Yves Pierre-Louis, the news director of Radio Timoun, housed at the Aristide Foundation for Democracy. “And that doesn’t include several young people who have not returned home and are now disappeared. Dozens of people were arrested.” The police say only 12 people were detained.

FOR TWO DAYS, PORT-AU-PRINCE WAS ALMOST COMPLETELY PARALYZED BY A GENERAL STRIKE…

In Port-au-Prince, demonstrators threw rocks at the French Embassy on the Champ de Mars, charging it supports Moïse. Nearby on Rue Capois, demonstrators also vandalized the King of Kings Supermarket and broke some windows with rocks on the Cine Triumph.

Then on Mon. Jun. 10 and Tue. Jun. 11, Port-au-Prince was almost completely paralyzed by a general strike which shut down public transportation, and most businesses, banks, schools, factories, and government offices. On Monday, in the relatively affluent town of Pétionville in the hills above the capital, some banks and businesses opened in the morning, but, seeing no activity, they closed around noon. On Tuesday, a few of the assembly factories in the SONAPI Industrial Park opened. Prensa Latina reported that public transportation was still mostly stopped, but “several shopping centers, pharmacies, banks, gas stations, and restaurants did resume their services.”

According to Pierre-Louis, “for these first two days, we can say the strike succeeded close to 100%.”

In February, Haiti was “locked down” (the protestors’ term) by massive demonstrations for 10 days. That uprising demanding Moïse’s departure has been rekindled by the release of a second report on May 31 by Haiti’s Superior Court of Auditors and Administrative Disputes (CSCCA), in which Moïse’s companies are accused of bilking the Venezuelan-oil-fed Petrocaribe Fund of about $2 million.

The over 600 page report also details vast corruption under the government of Michel Martelly, Moïse’s PHTK predecessor and mentor.

On the evening of Mon. Jun. 10, an unidentified gunman fatally shot journalist Pétion Rospide near the National Theatre as he was driving home from work at Radio Sans Fin, which he founded about a year ago with former Radio Caraïbes journalists Yvenert Foeshter Joseph and Israel Jacky Cantave.

Prior to the 2004 coup d’état, Rospide had been a member of President Jean-Bertrand Aristide’s security corps. He was arrested by de facto authorities after the coup and spent several years as a political prisoner in the National Penitentiary, despite a vocal campaign for his release. From 2008 to 2011, he was a journalist and distributor with Haïti Liberté newspaper, before starting a small car rental business and becoming an activist behind the founding of the consumers defense group Active Solidarity with the Struggle of Haitian Consumers (SALCONH) with Joseph and Cantave.

In recent broadcasts on Radio Sans Fin, Rospide had been critical of Pres. Moïse’s corruption and police brutality against demonstrators. He had commented on a recent viral video of police stoning a man face down on the ground near the home of Pres. Moïse in Pelerin 5.

Rospide’s murder took place in the 3rd Circumscription near Portail Léogâne where another regime critic, journalist Vladimir Legagneur, disappeared on Mar. 14, 2018, allegedly at the hands of pro-government gangs which are powerful in the area.

Also on Monday, men torched three jeeps belonging to Radio Tele Ginen, which is viewed by the population as a pro-regime outlet, and stoned some of its journalists.

Richardson Jourdan, a journalist with Haitian National Television (TNH), was also attacked by a crowd on Fri. Jun. 7.

Government Unmoved
Despite the specter of a reinvigorated revolt, the government says it will stand its ground. Jean Michel Lapin, the acting prime minister, said Monday that Jovenel would serve out his five year term which began in February 2017.

Moïse himself has repeated on several occasions that he will not step down but is willing to negotiate with the opposition, which has rebuffed the offer.

MOÏSE HAS SAID THAT HE WILL NOT STEP DOWN BUT IS WILLING TO NEGOTIATE WITH THE OPPOSITION, WHICH HAS REBUFFED THE OFFER.

Even Lapin has not been ratified yet, after three failed attempts to hold a Senate session to hear his General Policy, due to the determined efforts of four opposition senators: Evalière Beauplan (PONT), Antonio Chéramy aka “Don Kato” (VERITE), Ricard Pierre (Piti Dessalin) and Nenel Cassy (Fanmi Lavalas). Division and wrangling for influence and bribes among regime allies has also contributed to the non-ratification.

A presidential adviser, Renald Lubérice, now says that Lapin should withdraw. This could be a harbinger that Moïse will jettison the highly uninspiring Lapin for another candidate. But Lapin dismissed Lubérice’s statement, saying it was just the opinion of “a citizen” and that he has “100% sincere cooperation” with Moïse.

As Repression Rises, So Does Anger
On Monday morning, either Dimitri Hérard, the head of the Security Unit to Guard the National Palace (USGPN), or one of his security detail fatally shot a motorcycle taxi driver on the airport road.

The shooting provoked outrage among the moto-taxis that swarm Haiti’s streets. Like angry bees, they chased Hérard’s cortege back to his house in Delmas 31 before being dispersed by police with tear-gas.

The incident captures the escalating nature of the crisis. With every killing, the masses become more enraged.

“If Jovenel and his acolytes continue to be hard-headed in trying to keep power, Jovenel will be responsible for everything that happens, the country will shut down until he falls,” wrote the Konbit of Political, Union, and Popular Organizations on Jun. 7. “Strikes, mobilizations, and petro-blockages are going to spread across the nation… The Konbit calls on organizations, parties, and political groups to work to find a quick entente on an alternative to replace Jovenel. Put all personal interest aside.”