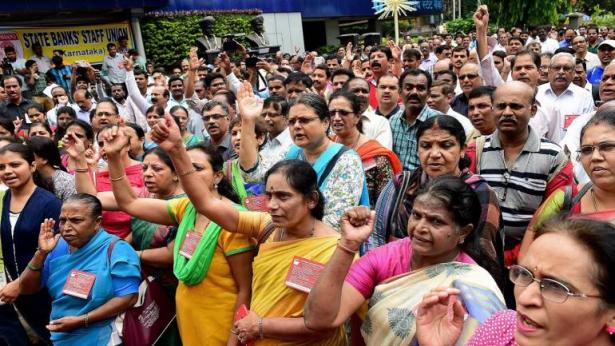 Farmers and workers plan a mass strike in India this Wednesday, January 8, in protest of the agrarian crisis, attacks on labor rights, and the new Citizenship Amendment Act. They will be joined by student groups and citizenship rights groups.

GURUGRAM: Lakhs of farmers, industrial workers, daily wagers and other government employees across the state are gearing up to take part in a nationwide strike on January 8 against many of the Centre’s policies.

Led by groups like the All India Kisan Sangharsh Coordination Committee (AIKSCC), All India Trade Union Congress (AITUC), Centre for Indian Trade Union (CITU), the one-day strike will see many voices join in.

RELATED CONTENT: Those Who Search for Dawn Don’t Fear the Night

“There are four forces that make this strike strong — call by trade unions, support by farmers’ organisations, involvement of students’ groups and inclusion of the anti-CAA movement under the banner of We The People,” said political activist Yogendra Yadav. “This should not be seen as a litmus test, but a protest against the government’s policies. The good thing is that people are coming out. The whole idea is to bring a strong narrative around real issues,” he added.

The call for the strike was first given in September at a mass convention of workers. Soon AIKCC, an umbrella organisation for over 100 farmers’ groups, joined in. After the CAA [Citizenship Amendment Act] was passed, more groups responded to the strike call. Though the protest will be spearheaded by the farmers’ union, several others like Manesar’s Honda employees’ union and groups of government employees from the roadways, health department and municipal corporations will lend unconditional support. Some of the issues they had been highlighting are privatisation, rising unemployment, agrarian crisis, closing of industries, etc.

RELATED CONTENT: India’s Government is Going to War Against Its Own People

“There are three main angles to the protest. First is the agrarian crisis, which has brought farmers, dairy and fishery workers, and share-croppers together. Second is the economic slowdown and dilution of labour rights, which has forced workers of banks and healthcare facilities to come out and protest. Third is the attack on the fundamentals of the Constitution and introduction of an Act. For long, the government has skirted discussions on basic problems,” said Rajiv Godara of AIKCC.

Besides farmers, workers, civil societies and student groups, over 20,000 members of the Haryana Roadways union have also decided to up the ante against the government over its kilometer scheme, under which private buses are allowed in the government fleet.