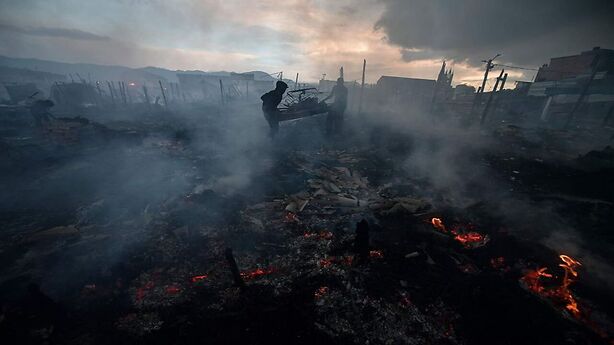 Colombian police allegedly set fire to temporary camps during an eviction operation in Bogotá. The fire consumed the huts and belongings of over 300 poor displaced people, recyclers and immigrants, who had been living in temporary camps since last year.

Colombia’s notorious police unit the ESMAD (Anti-Disturbance Mobile Squadron) has come under fire once again following the violent eviction of homeless families in the south of Bogotá. On October 8 agents of the ESMAD evicted around 120 families from a property belonging to the University of Cundinamarca in the Puente Aranda municipality, in the capital Bogotá. During the eviction operation, which was ordered by mayor Claudia López, a massive fire broke out in the temporary camps where displaced people, recyclers and immigrants had been living since last year.

The fire consumed the shacks and belongings of over 300 poor people. After the fire was controlled by firefighters, some people tried to recover their possessions, but were unable to. Several pet dogs of the inhabitants were killed in the fire and others were injured by the blaze, a sharp departure from the mayor’s “green” platform.

The witnesses and victims of the tragedy allege that the police officials are responsible for the fire. They stated that the fire began after ESMAD launched gases and threw stun grenades. Meanwhile, the police alleged that the inhabitants started the fire.

While residents initially resisted the eviction, the police violence and the fire forced them to leave.

The incident has received fierce condemnation by various political and social leaders.

Senator from the opposition Comunes party, Sandra Ramírez, was among the first ones to condemn the inhuman event. “According to the community, ESMAD set fire to the houses of more than 100 recycling families in the Puente Aranda sector, leaving them on the street. Why is there so much hatred by the Public Force towards the people? What is the response of the Bogotá mayor’s office? And what about the (violation of) human rights?,”tweeted the progressive legislator.

Likewise, Adolfo Rivas, director of the Smart Citizenship movement, also condemned the incident. “How awful! ESMAD set fire to the homes of 100 recyclers in Puente Aranda, Bogotá, these are the complaints made by the community in the sector. How is it possible that we have reached this level of barbarism and indolence?” hetweeted.

Social activist David Rozo also rejected the eviction. “What Claudia López and ESMAD did today with the eviction of Puente Aranda where members of the public force incinerated the houses of more than 100 vulnerable families is the most disastrous and gloomy (event) that we have seen in recent months,” he wrote in a tweet.

Meanwhile, the Secretary of Government of Bogotá, Luis Ernesto Gómez, defended the police and accused the settlers of igniting the fire. He shared a video on his twitter account that supported the official version.

“Those who claim that ESMAD set fire to waste pickers’ homes in Puente Aranda are blatantly lying. In the video, it is clear that where the fire starts, there are no police officers but illegal occupants and that the Bogotá police are helping to extinguish it,” he defended.

However, a video shared by Bogotá police hours later as further proof of their “innocence”, actually provided evidence for the manipulation of the facts by the government.

Faced with the widespread condemnation, the local mayor of Puente Aranda announced that the district habitat and social integration secretariat offered temporary shelter and support to the affected families. However, the majority denounced that the aid was not enough given their vulnerable conditions.

Featured image: The fire consumed the shacks and belongings of over 300 poor displaced people, recyclers and immigrants, who had been living in temporary camps since last year. Photo: El Espectador