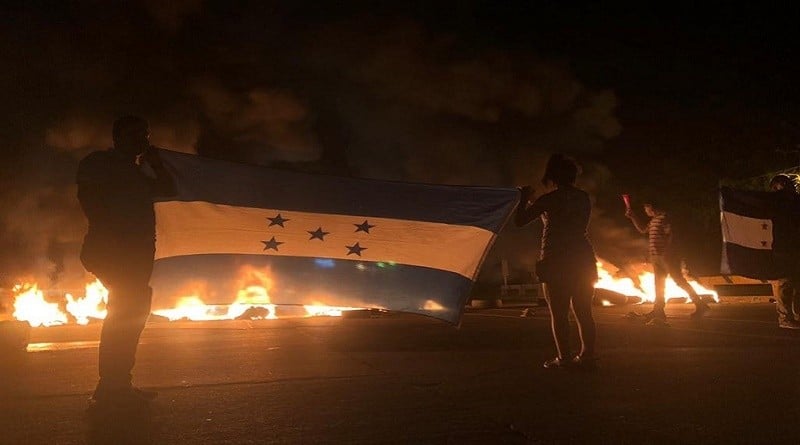 The Honduran people mobilized this Friday night to demand the resignation of President Juan Orlando Hernández for his links with drug trafficking, after his brother, Juan Antonio “Tony” Hernández was convicted of drug trafficking in a trial in United States (USA).

The former Honduran president Manuel Zelaya summoned peaceful demonstrations indefinitely until the end of the Hernández government, because the sentence against his brother “constitutes a condemnation for Juan Orlando Hernández himself.”

RELATED CONTENT: How the US Created Violent Chaos in Honduras

“We call all our militancy at the national level to total, organized and permanent mobilization with actions of peaceful, but firm and forceful protests. We instruct our grassroots organizations, social movements and other political organizations in order to move towards a national plan of indefinite protest until this dictatorship falls,” said Zelaya.

Similarly, he urged the US to suspend its political support to the government of Honduras, as well as to suspend all the cooperation that are carried out in the military level.

Judgment
This Friday, a New York jury convicted Juan Antonio Hernández, brother of the Honduran president, for the crimes of conspiring to traffick cocaine, possession of weapons and destructive devices and false testimony, AVN says.

During the trial, the prosecution maintained that the Hernández government had turned their country into a “narco-state” and presented as witnesses two former drug lords who agreed to collaborate to reduce their sentences.

Given this, President Hernández said that “the jury sadly decided to believe in the word of people who have declared themselves confessed murderers, drug traffickers.”