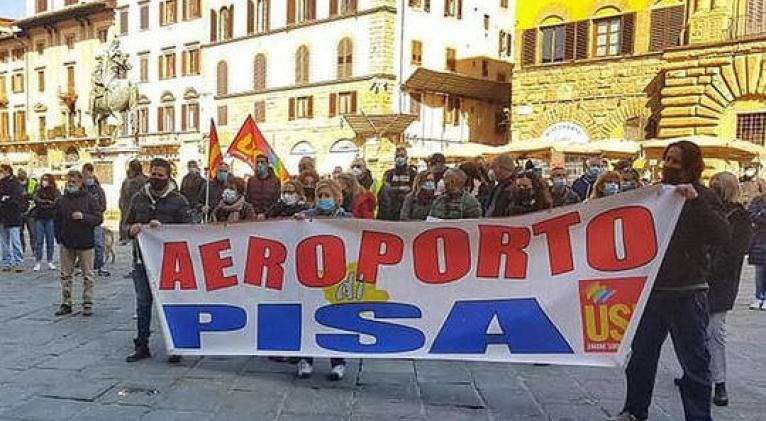 One of Italy’s largest trade unions has called for a protest outside the Pisa airport on Saturday, after receiving a tip from some employees that Ukraine relief flights were transporting weapons and ammunition, not food and medicine.

Several workers at the Galileo Galilei airport refused to load one of the cargo flights advertised as carrying humanitarian aid to Ukraine. The crates did not contain food and medication but weapons, ammunition and explosives instead, the Unione Sindacale di Base (USB) said in a statement on Monday evening.

“We strongly denounce this outright falsification, which cynically uses ‘humanitarian’ aid as cover to fuel the war in Ukraine,” the USB said.

The union said the workers refused to load the military supplies as that would lead to the deaths of their colleagues in Ukraine – namely, those working at the bases targeted by Russian missile strikes, where the weapons processed through US and NATO bases in Poland get delivered.

Francesca Donato, an Italian member of the European Parliament, commented on the union’s statement by calling on the government in Rome to “clarify” what is happening.

Meanwhile, dockworkers at the nearby port of Livorno joined the protest on Tuesday, praising their airport colleagues for standing up for their values.

“We stand alongside the Ukrainian peoples, the Donbass and Russia and we do not want to be complicit in this conflict,” the Porto Livorno chapter of USB said in a statement.

USB is calling for air traffic control of the Pisa airport to “immediately block these flights of death disguised as humanitarian aid.” A protest under the slogan “bridges of peace, not flights of war” is scheduled outside the airport for Saturday, March 19.

The union also called on all workers to refuse to load weapons and explosives, and for an immediate ceasefire and peace talks to end the conflict in Ukraine.

Russia sent troops into Ukraine on February 23, saying it needs to demilitarize and “denazify” the government in Kiev that sought NATO membership and nuclear weapons. The Ukrainian government has accused Russia of an unprovoked attack. NATO has pledged military and humanitarian aid to Kiev, while enacting a widespread embargo against Russia.