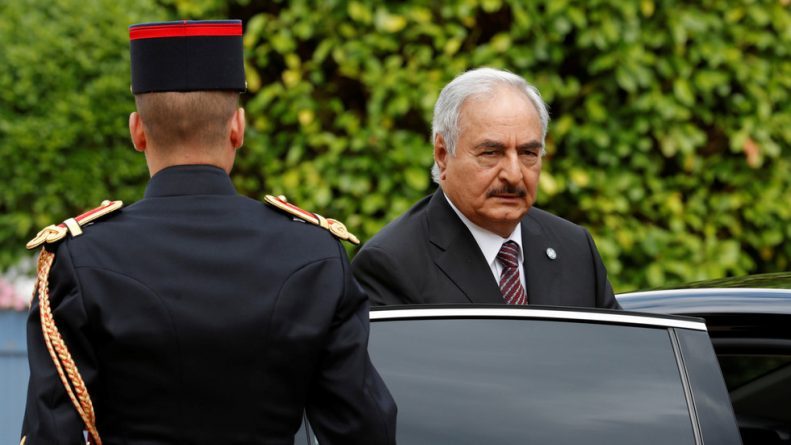 General Haftar, whose forces are on the move towards Tripoli, is the right man for the West to feed their oil appetites – but he is also the one who can switch sides quickly, analysts told RT.

Forces loyal to General Khalifa Haftar are steadily advancing towards Tripoli, where the UN-recognized Government of National Accord (GNA) calls for help and hastily prepares to defend the troubled Libyan capital. But Western powers, who established formal ties to GNA, are also keeping in touch with their arch-rival – just because he controls an asset that decides almost everything in the war-torn country.

“Securing access to oil and protection of oil – that’s what Haftar purports to do,” Alessandro Bruno, an independent political analyst and Libya expert, told RT.

He explained that this oil is generally high quality, and it is mainly processed at refineries in Italy and France – the two NATO countries heavily involved in the Libyan turmoil since they helped topple Colonel Muammar Gaddafi back in 2011.

Oil is everything in Libya, it has little else.

Nevertheless, he doesn’t control Libya’s finances and the national oil company, which has a HQ in Tripoli, explained Grigory Lukyanov, senior lecturer at Moscow-based Higher School of Economics.

“All money transfers relating to Libyan oil – even the oil that is drilled in Haftar-controlled parts of Libya – go through Tripoli,” which make it extremely challenging to cash in on it.

Unsurprisingly, natural resources dominate much of the discussions between Haftar and major powers. This week, President Donald Trump hailed the Libyan strongman’s “significant role in fighting terrorism and securing Libya’s oil resources” in a phone call.

The move seems to signal that the US is swinging its weight in favor of Haftar, Bruno believes.

“It certainly suggests that Trump will not be obstructing Haftar’s push into Tripoli as [GNA’s] Prime Minister Fayez al-Sarraj was hoping,” he said. Sarraj is seen as weak, “and Trump does not like the weak … also he is backed by UN, and Trump doesn’t like the UN.”

Meanwhile, France, which has long-standing interests in former African colonies, wants him to become the one who may influence things in Tripoli.

On Thursday the GNA accused Paris of throwing its weight behind Haftar, saying it has severed any “bilateral security agreements” as a result. While France has denied allegations of “relentless backing” for the General, it still does its utmost to make him a legitimate political player, Lukyanov added.

Politics aside, France has also been aiding Haftar’s Libyan National Army (LNA). Likewise, Paris hopes that Haftar will advance French interests in the region, be it arms sales or drilling for oil.

French military advisers helped run the LNA staff, provided it with intelligence and trained its troops inside Libya.

But while the West sets its hopes for Haftar, there are a number of setbacks. The general “is 75 years old, he’s not in complete health,” Bruno noted. Age aside, his reliability as a partner can also be an issue. “How reliable is Haftar? That’s a big question,” the expert wondered.

His personal history shows [that he is someone] who shifts loyalties very quickly … Perhaps he is more reliable to the Americans.

Back in the late 1980s, Haftar and 300 of his men were captured during a short conflict with Chad, and were subsequently disowned by Gaddafi. This led him to devote the next two decades of his life to toppling the late Libyan leader.

Up until 2011, he lived in exile in Virginia, and the proximity to the CIA’s headquarters in Langley gave birth to rumors about close ties with the US intelligence community. “Perhaps, he’s a CIA asset,” Bruno opined.

In the end, “Libyans will be the losers” because there won’t be any prospect for peace since Khaftar “is determined to take power by military means,” he concluded.