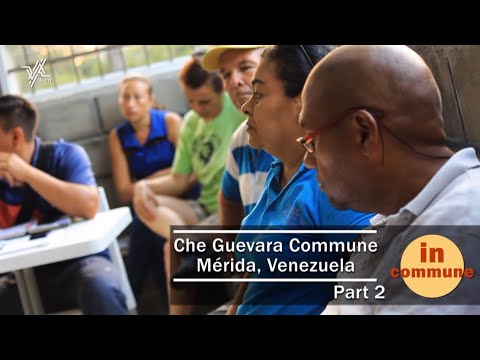 In the second part of our episode, we look at how the Che Guevara Commune’s economic development has improved its political reach and impact on the local community.

Outside of Venezuela, communes are a little-known aspect of the Bolivarian Revolution. Yet the development of the communal state is central to Hugo Chávez’s 21st century socialism.

Through the In Commune series, Venezuelanalysis explores diverse rural and urban communes to help better understand what these highly controversial bodies mean, how they work, and what they could signify for the future of the Bolivarian Revolution.

The Che Guevara Commune, located in the temperate foothills of the Andes mountains of Mérida state, has flourished in the last few years with the participation of important productive organizations from the area dedicated to chocolate and coffee. These organizations have contributed to the local economy by controlling the entire productive chain. This eliminates exploitative intermediaries, benefits local farmers, workers and cooperative associates while stabilizing the local economy. The communards attribute this model to their namesake, Ernesto Che Guevara, for his contributions to the development of a socialist economy based on budget planning.

The Che Guevara Commune’s economic planning has led the communards to create a local currency to sidestep the Bolívar’s continued devaluation. This system is based on the price of coffee and is called the “Cafeto.” The Cafeto is acquired through a deposit in the COLIMIR cooperative’s coffee bank, and can then be exchanged for goods and services from the communal productive units as well as communally distributed domestic gas.

The Cafeto has also allowed the Che Guevara Commune to interchange products with other organizations and communes outside their territory, including PROINPA (research lab dedicated to research and development of potato seeds) and El Maizal Commune from Lara State. Both organizations sell their products for Cafetos which they in turn exchange for coffee, chocolate or other services from the commune.

At the same time, the commune’s growth has meant a greater investment in the welfare, educational and social development of the local area. The COLIMIR Cooperative, for example, has financed the renovation of local schools. The Equidad cooperative holds weekly barter markets and donates a percentage of the profits for the financing of communal activities. For its part, the Che Guevara chocolate company provides local schools with chocolate so that children can taste the chocolate made from the cocoa grown on their own family farms.

However, the biggest contributions of the productive units are organizational. With US sanctions causing a lack of spare parts and fuel shortages, especially in rural areas, the communards have worked together to provide alternative solutions. This has meant forging agreements with the municipality such as providing transportation for students and teachers in exchange for a regular supply of fuel.

The Che Guevara Commune has demonstrated great capacity to unify its diverse local revolutionary forces and tackle the challenges in the current context of imperialist attacks and the subsequent economic and political turmoil. The experience of the Che Guevara Commune is evidence of the resilience which the communal system can provide, and the local communards have no doubt that they are writing a very important chapter in revolutionary history.

Previous episodes of “In Commune”