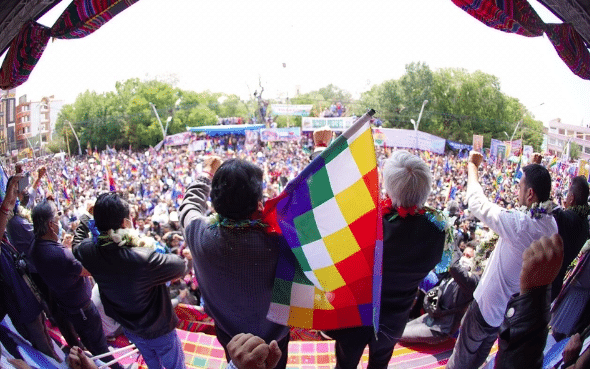 The indigenous leader and former president of Bolivia, Evo Morales Ayma, returned to Bolivia in triumph alongside Alvaro Garcia Linera, his former vice president, a year after he suffered a coup d’état organized by elements of the right wing of that country, sponsored by the United States government and endorsed by international organizations such as the Organization of American States (OAS).

The president was received as a hero by indigenous organizations, miners, workers from different sectors, and massive crowds of people. “I had no doubt that I was going to come back, I didn’t know it would be so soon,” said Morales.

“It is something so historic and so unprecedented, thanks to the unity of the Bolivian people and many authorities and former authorities of the world,” Morales said in his speech. He thank again at this point the president of Argentina, Alberto Fernandez, Mexico, Andres Manuel Lopez Obrador and Venezuela, Nicolas Maduro. “On November 11 of last year I left to save my life, now I will return alive to Chimoré (Cochabamba).” The former president thanked the Argentine people and government for hosting him during his exile. “This is something that we will never forget, I felt at home, part of my life remains in Argentina. I did not feel abandoned,” he said. Organized groups of miners celebrated the return of the indigenous leader after a year of his forced exit from power. With posters from different popular organizations they received the former Bolivian president.

In his first speech in Bolivia, Evo Morales says that the country has 3 reasons to celebrate. pic.twitter.com/uTvgnLlXQQ

The people welcoming Evo Morales arriving at the town of Atocha. Video posted by the Argentinian journalist Marco Teruggi.

Featured image: Multitude gathered in Villazon, Bolivia to welcome Evo Morales as a hero after returning from exile. Photo courtesy of Pagina/12. Photos without credit from EFE and AP.