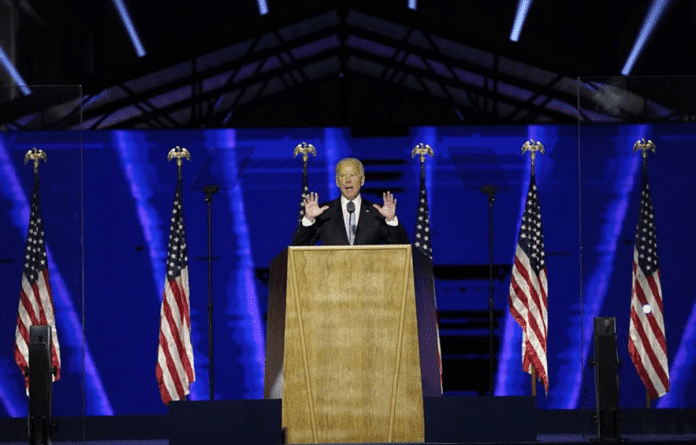 Millions of people around the world breathed a sigh of relief with the defeat of Donald Trump in the 2020 U.S. election and victory of the Biden-Harris ticket.

Joe Biden’s victory speech exuded a feeling of optimism in its call for a new era of bipartisanship and decency in politics.

However, it is unlikely that decency will prevail in the realm of foreign policy.

According to a profile in The Atlantic Magazine, Biden prides himself on his close interpersonal relations with world leaders, which enables the advancement of mutual foreign policy goals.

However, if the leader is unsavory, then these interpersonal relations become problematic.

As Vice-President under Barack Obama, Biden cultivated a close relationship with Iraqi leader Nouri al-Maliki who was known as the “Shia Saddam” for his sectarian policies that led to the growth of the Islamic State of Iraq and the Levant (ISIS).

Biden was also very close with Ukrainian President Petro Porosehnko, who was installed in a U.S. backed coup in 2014 and initiated a civil war in Eastern Ukraine that left over 13,000 people dead.[1]

In some circles, Biden is lauded for being a cautionary voice in the Obama administration on issues of war and peace.

In fact, he championed drone strikes and Special Forces operations as an alternative to the heavy deployment of ground troops, which is the CIAs preferred strategy.

Following the U.S. NATO bombing of Libya, Biden bragged that “we didn’t lose a single life” and that the war “served as a prescription for how to deal with the world as we go forward.”[2]

This statement is deeply disturbing in light of the fact that hundreds of Libyans were killed in U.S. air strikes and the country was left in ruins after its leader, Muammar Qaddafi was overthrown and lynched.

If this is the prescription for dealing with the world as we go forward, we are all in trouble.

From Dove to Hawk

When he first campaigned for Senate in 1972, young Biden positioned himself as a dove who opposed the Vietnam War and, in 1974, supported a bill that called for banning all covert operations.

Sensing which way the political winds were blowing, however, Biden told a Senate Committee in 1976 that he had “no illusions about Soviet intentions and capabilities in the world” and expressed agreement with neoconservative Senator Daniel Patrick Moynihan (D-NY) that “isolationism was a dangerous and naïve foundation upon which to rest our foreign policy or the intelligence community which must serve that policy.”

After Jimmy Carter tried to cut the CIA’s staff by one-third, Biden supported increases in intelligence and counterintelligence funding, and in 1980, he voted to approve as Director of Central Intelligence (DCI) William Casey, a staunch anticommunist who ramped up covert arms supplies to the Afghan mujahidin, Nicaraguan Contras, and Jonas Savimbi’s brutal UNITA forces in Angola.

As the 1980s progressed, Biden became a staunch proponent of the War on Drugs—even though he reviewed DEA reports on the illicit drug trade which would have pointed to the corruption of CIA allies.

In 1999, Biden played a key role lobbying in the Senate for Plan Colombia, a $1.3 billion dollar program, which contributed to the Colombian army’s war on the leftist Fuerzas Armada Revolucionario de Colombia (FARC), who were branded as narco-guerrillas.

Senator Paul Wellstone (D-MN), had promoted an alternative to Plan Colombia that would have switched $225 million from military aid to drug treatment programs at home. He argued that “we’ve been down this road forever, forever,” and that “more soldiers and more guns have not and will not defeat the source of illegal narcotics.”

Biden rose immediately to Plan Colombia’s defense in the Senate, stating that Congress would “wreak a whirlwind” if it “failed to strike back at the drug traffickers.”[3] A decade later, Colombia remained the “world leader in coca production,” and was wracked by violence that had resulted as much from the War on Drugs and war against FARC as from the traffickers themselves.[4]

During the 1990s, besides the anti-drug crusade, Biden took up the cause of NATO expansion in Eastern Europe, which needlessly antagonized Russia and helped to ensure the Cold War’s revival.

Biden also championed the bombing of Kosovo, whose aim was to undermine the socialist government of Serbia’s Slobodan Milosovic and establish a U.S. military base, Camp Bondsteel.

In 2010, Biden characterized Hashim Thaci as the “George Washington” of Kosovo, though Thaci had to cancel a trip to Washington in 2020 because he had been indicted for war crimes that included criminal responsibility for over one hundred murders.

Biden’s evolution from a dove to a hawk reached its tragic denouement with his sponsorship of hearings in the Senate that brought together anti-Saddam dissidents who wanted regime change. Biden through these hearings helped secure support for the invasion of Iraq which resulted in over a million deaths. The young idealist who had rode the wave of the 1960s protest movements into office had evolved by this time into a seasoned and unscrupulous political operator who had sold his soul for power. Obama’s Veep

Biden’s lack of principle becomes apparent when we scrutinize his conduct in Ukraine. He served there as the Obama administration’s top point man in its effort to shore up the regime of Petro Poroshenko, a corrupt oligarch who was installed in the February 2014 coup d’état (known as the “Maidan coup”) that ousted the pro-Russian president Viktor Yanukovych.

After the coup, Biden made multiple visits to Kiev and helped to forge a coalition between Poroshenko and Arseniy Yatsenyuk, a neoliberal favored by the State Department.

Biden’s wayward son, Hunter, was all-the-while put on the board of an energy company, Burisma, whose executives were being investigated for tax evasion. Biden aided his son by having the Prosecutor General who was investigating Burisma, Viktor Shokin, removed by threatening to withhold a $1 billion IMF loan.

The Obama administration at the time was supplying non-lethal military equipment to the Ukraine for use in its war on the Eastern provinces. The human cost did not concern the future president-elect nor the fact that the Ukrainian government was supported by neo-Nazi elements who worshiped Stephen Bandera, a Nazi collaborator in World War II.[5]

White house logs showed that Biden made the most phone calls during his Vice-Presidency to Iraq. On the receiving end was Nouri al-Maliki, who fit the State Department’s need for a “shia strongman” who could advance American interests. When Arab-Spring style protests erupted against al-Maliki, Biden and Secretary of State John Kerry quietly worked to help install Haidar al-Abadi who was committed to privatizing Iraq’s economy in line with the original goals of the 2003 military invasion.[6]

During the Democratic Party primaries, Biden touted his role in developing the Alliance for Prosperity in Central America, which promoted large scale infrastructure projects and privatization programs that entailed a selling off of national resources to U.S. based multi-national corporations.

The showpiece for the Alliance, or “Biden Plan,” was Honduras, where the Obama administration had supported another coup d’état which helped fuel the migration crisis to the U.S.[7]

RELATED CONTENT: What Would a Joe Biden Presidency Mean for Venezuela?

These cases all illuminate the shameful foreign policy record that Biden compiled as Vice-President—a record that provides a good barometer for what we can expect during his presidency.

Right-Wing Attacks on Trump and Russophobia

During the 2020 presidential campaign, Biden characteristically attacked Donald Trump on foreign policy from the right.

During the second debate, Biden criticized Trump for meeting with North Korean leader Kim Jong-Un. When Trump said: “We have a different kind of relationship. We have a very good relationship [with Kim], and there’s no war,” Biden shot back: “We had a good relationship with Hitler before he, in fact, invaded the rest of Europe.”

During the same debate, Biden asked Trump why he hadn’t confronted Russia when Trump had sold Ukraine Javelin anti-tank weapons, and supported a military buildup on its doorstep while pulling out of arms control treaties.

Biden’s Russophobia was apparent in a January-February 2018 essay in Foreign Affairs, where he claimed that Russia had refused cooperation with the West at the end of the Cold War and was now “brazenly assaulting the foundations of Western democracy around the world” including by invading neighboring countries such as Georgia and Ukraine.

However, it was the United States which failed to abide by a promise made by the George H. W. Bush administration that it would not expand NATO into Eastern Europe, and an EU investigation blamed then-Georgian leader Mikheil Saakashvili for instigating the 2008 Russia-Georgia war after trying to seize South Ossetia. The United States furthermore had supported the coup in Ukraine that triggered the civil war which drew in Russia.

What Can We Expect

While likely to restore support for the Paris climate accord, Iran nuclear deal and Obama’s opening towards Cuba, defense contractors are confident that there will be no major cuts in military spending under Biden.

The new president-elect has said that he cannot promise a complete troop withdrawal from Afghanistan, Iraq and Syria, and has talked about the need for bolstering cyberwarfare and the U.S. arsenal of drones.

Biden will also most surely escalate (1) the new Cold War with Russia, (2) sustain the African military command, AFRICOM, which Trump was threatening to cut back on, and (3) adopt a so-called “light footprint” approach to war, which he favored as Vice-President.

In an interview with the Council on Foreign Relations (CFR), Biden called for greater sanctions and emphasized that he was among the first to recognize the right-wing renegade leader Juan Guaido as the legitimate leader of Venezuela, while pushing for the removal of socialist president Nicholas Maduro whom he called a tyrant.

The CFR has also highlighted Biden’s hostility towards China and desire to “reinvigorate the United States as a Pacific power by increasing the U.S. naval presence in the Asia-Pacific and deepening ties with countries including Australia, Indonesia, Japan, and South Korea to make it clear to Beijing that Washington ‘won’t back down.’”

The main beneficiaries of this policy will be the weapons makers who according to The Nation Magazinegave $2.4 million to Biden during the 2020 election campaign compared to $1.6 million to Trump.

One of Biden’s top campaign donors, Palmora Partners, a multi-billion dollar hedge fund, has more than 260,000 shares in Raytheon, a preeminent weapons manufacturer and supplier of weapons to Saudi Arabia.

Another of Biden’s top donors, Jim Simons, who gave over $7 million, founded Renaissance Capital, which owns 1.2 million shares in Raytheon worth over $75 million, and 130,000 shares in Lockheed Martin worth $50 million.

Joe Biden conveys an image of decency compared to Donald Trump and brings at least some rationality to the White House. However, on foreign policy issues, Biden’s priorities are very clear and should make us uneasy.