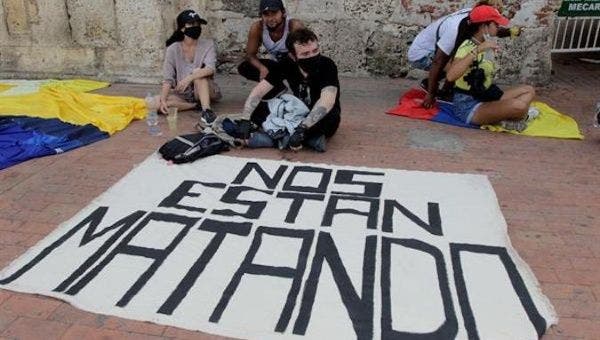 Seven social leaders have been killed in Colombia since the beginning of the protests against President Iván Duque’s government on April 28.

Colombia’s Institute for Development and Peace Studies (INDEPAZ) reported on Wednesday, May 12, the murder of women’s rights defender Cecilia Valderrama in the Chaparral municipality, Tolima Department.

The leader of the El Escobal Women’s Association (ASMUES) was found dead with signs of violence in a pasture on Wednesday.

Her neighbors last saw her on Tuesday at 6:00 pm local time, when she left her residence to go to a nearby road, to wait for a package from downtown. Valderrama did not show up to meet the vehicle nor did she return home.

“A couple of hours after her disappearance, the entire neighborhood began to search for her,” said community leader Norberto Fernández. “We were worried for her; she was very dear to everyone.”

Thousands in Colombia continued their protests against police violence and inequality.

“We are dismayed because our community is peaceful, with no acts of violence. We urge authorities to look for the perpetrators of this crime,” he added.

Seven social leaders have been killed in Colombia since the beginning of the protests against President Iván Duque’s government on April 28.

The first of these politically related crimes occurred in the Aguadas municipality, where Wilson López was killed by armed men.

Featured image: The sign reads, “They are killing us,” at a protest venue in Bogotá, Colombia, May 2021. | Photo: EFE