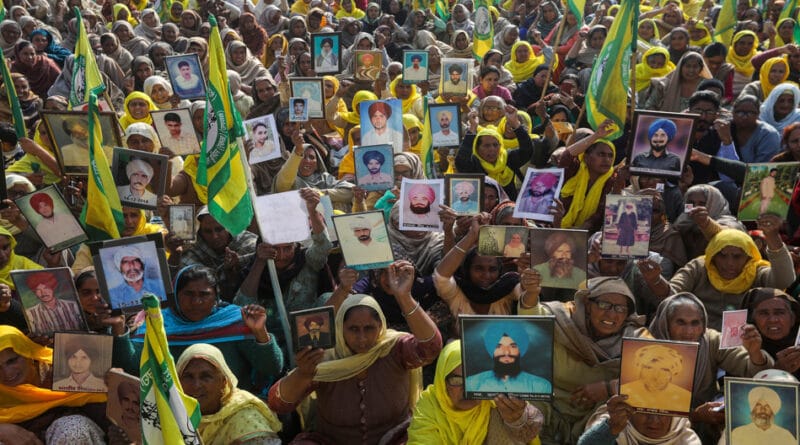 Hundreds of Indian women, including many widows of farmers who were believed to have killed themselves over debt, have joined a protest against government reforms that farmers say threaten their livelihoods.

Farmers have been protesting for nearly a month over the reforms, enacted in September, to deregulate the agriculture sector, allowing farmers to sell to buyers beyond government-regulated wholesale markets.

Small farmers fear the changes will mean the end of guaranteed minimum prices for their crops and leave them at the mercy of big retailers.

“If these black laws come, more farmers will go deeper into debt,” 40-year-old Harshdeep Kaur, a widow from Punjab state, said at one protest site on the outskirts of the capital, New Delhi, on Wednesday.

“More mothers and sisters will become widows like me.”

Suicide by struggling farmers has been a problem in India for years.

Nearly 10,350 farmers and agricultural laborers committed suicide in 2018 – making up almost 8% of all suicides in India, according to the National Crime Records Bureau.

Kaur said her husband committed suicide three years ago after running up debts of 500,000 rupees (nearly $7,000). As she spoke, she held a passport sized photo of him.

Late on Wednesday, a 65-year-old Sikh priest committed suicide at one of the protest sites, said Ramandeep Singh Mann, a farmer from the northern state of Punjab.

In his suicide note, Sant Baba Ram Singh said he was “hurt to see the condition” of the protesting farmers, said Mann.

RELATED CONTENT: Venezuela is Open to the Future and we Want India to be Part of our Future: Envoy

The reforms, contained in three laws, loosen rules around the sale, pricing and storage of farm produce.

Modi has tried to assure farmers the changes will bring them new opportunities but few have been convinced. Several rounds of talks between farm union leaders and the government have failed.

Gurbax Singh said dozens of buses, tractors and cars were being arranged to bring more women from Punjab – the epicenter of the agitation.

Featured image: Women, including widows and relatives of farmers who were believed to have killed themselves over debt, attend a protest against farm bills passed by India’s parliament, at Tikri border near Delhi, India, December 16, 2020. (Photo by Reuters)