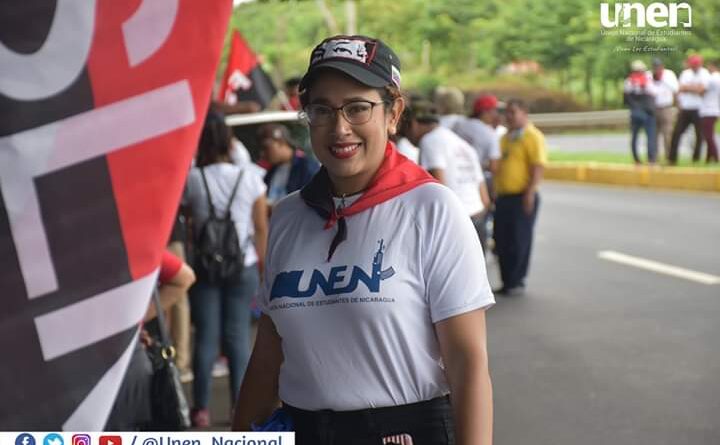 Fight Back! interviewed Rosalía Bohórquez, a leader in the youth sector of the Sandinista National Liberation Front (FSLN).

Fight Back!: What organization are you a member of?

Fight Back!: How has the experience with COVID-19 been in Nicaragua?

Bohórquez: Nicaragua took a preventive attitude since the very beginning of the global pandemic. Thanks to the public health system, a community model, we succeeded in an awareness campaign by going house to house, neighborhood by neighborhood all over the country.

Alongside this campaign, the government began a health mapping process to identify areas with the greatest risk of infection. This allowed the health authorities to gain greater control over potential spreading. From the first case of COVID-19, the government activated and implemented all the necessary sanitary protocols.

Thanks to the devoted capacity of the government and the awareness campaign, Nicaragua did not have a high number of deaths related to COVID-19. Also, because of this success, there were no social or economic restrictions, so Nicaraguans could live a normal life for the most part and we did not let the economy drop and hurt the country.

Fight Back!: What has the government done since the attempted U.S.-backed coup in 2018?

Bohórquez: Since the defeat of the attempted coup, the government implemented the National Law of Reconciliation and Dialogue to unify the people, many of who were truly manipulated by the right-wing press. In practice, this dialogue for peace took place in each neighborhood around the country.

The main work is to rebuild all that was destroyed by the coup plotters. However, the intentions to harm the country took place under the noses of many Nicaraguans without many realizing it. It was discovered that the main enemy of the people, the coup plotters, were financed by institutions from the U.S. government through NGOs. They took their directives from the U.S. to create chaos and destroy the country and they made a lot of money to do it.

RELATED CONTENT: US Cries Foul Because Nicaragua Stops it from Buying This Year’s Elections

There has been a lot of noise about the Ortega government cutting funding for NGOs but the president is simply using a pre-existing law about foreign interference in national elections and reinforcing its implementation.

Fight Back!: After the U.S. coup attempt in 2018, how does the road to the national elections in November look?

Bohórquez: The Nicaraguan electoral process is a wide-reaching effort that is participatory and democratic. There have been important reforms made that will allow more equal participation, more balanced for gender, for all Nicaraguans. Recently, new leaders were chosen to the Supreme Electoral Council; it is worth mentioning that this body is backed by the power of the state with constitutional guarantees. From now until November, the main work is to activate the local authorities in this electoral process, to pull the whole country together towards this election.

Nicaraguan people want to live in peace and continue to live how we were before the U.S.-backed coup attempt. That is why we are working hard to have a peaceful electoral process. With this approach, the majority at the polls know that only the FSLN will continue to improve and transform Nicaragua.