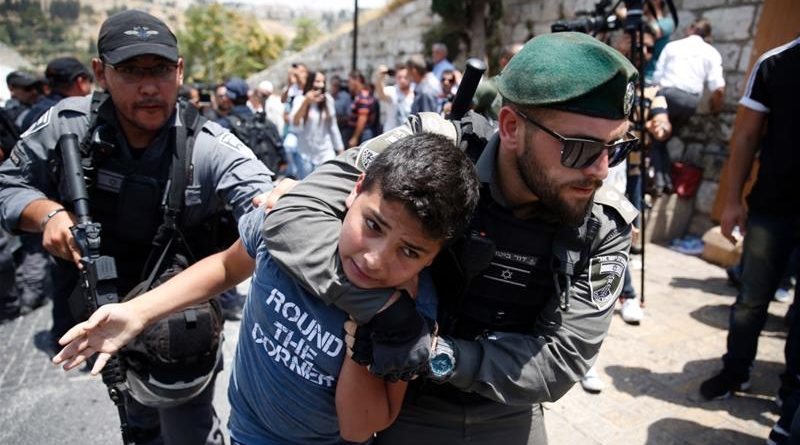 Palestine Prisoners Centre for Studies revealed in a statement on Friday that the arrests, which were carried out in Jerusalem make one thirst of all arrests in Palestine during the first six months of 2019. 2600 arrests took place in occupied Jerusalem, which attests to the Israeli targeting of Jerusalemites.

The statement said that February had the largest number of arrests against Jerusalemites, which was when worshipers insisted on opening the Mercy gate of Al Aqsa mosque despite Israeli intimidation.

Israeli forces at the time arrested dozens of Palestinians, including religious personnel and national figures like Chief of Waqf Council Abdel Athim Salhab and deputy director-general of the Waqf of Jerusalem Najeh Bkeirat. Meanwhile, Sheikh Raed Da’na was expelled from the holy city for 6 months and director of the Palestinian Prisoners Club in Jerusalem Naser Qous was arrested.

The arrests included all segments of Jerusalemites and were carried out throughout all areas of the holy city. However, Issawiyyeh topped the arrests list with 295 Palestinians arrested, then Shufat came second with 130 arrests, then Silwan with 120 arrests, the old city with 105 arrests, and finally Al Aqsa mosque with 65 arrests.

Most arrests targeted children, according to the statement. 300 of the arrests were against children, which makes one third of the total arrests, including 17 children under 12.

Other children were targeted with house arrests, which prevent children from going to school or hospital. Heavy bails also were imposed on most arrested children either as a part of a court sentence or only to release them for being found innocent.