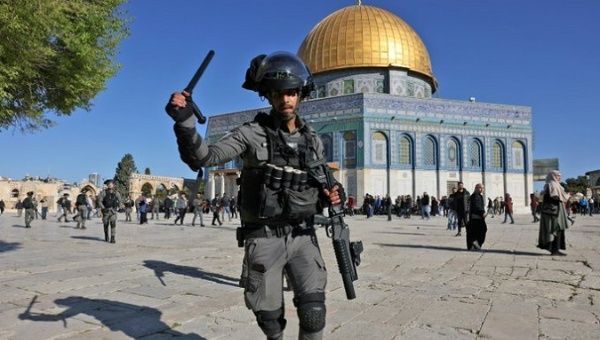 Once the morning prayer was over, the Israeli police attacked the Palestinians to disperse them from the esplanade and from the Al Aqsa mosque itself, which is the third holiest site in Islam.

On the second Friday of the month of Ramadan, Israeli police violently attacked Palestinian worshipers at the Al-Aqsa mosque compound in Jerusalem.

The Red Crescent emergency service reported that people were injured as a result of the shooting of rubber bullets, the explosion of stun grenades, and blows. Previously, sincew the early hours of Friday, hundreds of Palestinians flocked to the site carrying flags of the Palestinian National Authority and the Islamist movement Hamas.

Once the morning prayer was over, the Israeli police attacked the Palestinians to disperse them from the esplanade and from the Al Aqsa mosque itself, which is the third holiest site in Islam.

On Thursday, Palestinian factions, including the Fatah Party led by President Mahmoud Abbas and Islamic Resistance Movement (Hamas), condemned Israel for killing Palestinians and escalating tensions in the West Bank. Yesterday, two Palestinians were killed in the northern West Bank city of Jenin. Another civilian succumbed to wounds after being shot in Nablus.

“The Israeli government’s disregard for the lives of Palestinians by unleashing the Israeli army and settler groups to carry out field assassinations and military incursions,” the Fatah Party denounced, adding that “Israel is waging war against the Palestinian people and drags the entire region to catastrophic results.”

On the same day, Abbas held a telephone conversation with Emir of Qatar Sheikh Tamim bin Hamad Al Thani, saying “what is happening in the Palestinian territories due to the aggressive Israeli practices is serious and dangerous.”

Forty-one 41 Palestinians, including women and children, have been killed by Israeli soldiers in the West Bank since January. In Gaza, Hamas said it mourns the six Palestinians who lost their lives on Wednesday and Thursday.

“Hamas affirms that escalating Israeli measures against the defenseless Palestinian civilians will not stop the heroic resistance operations throughout occupied Palestine,” it said.