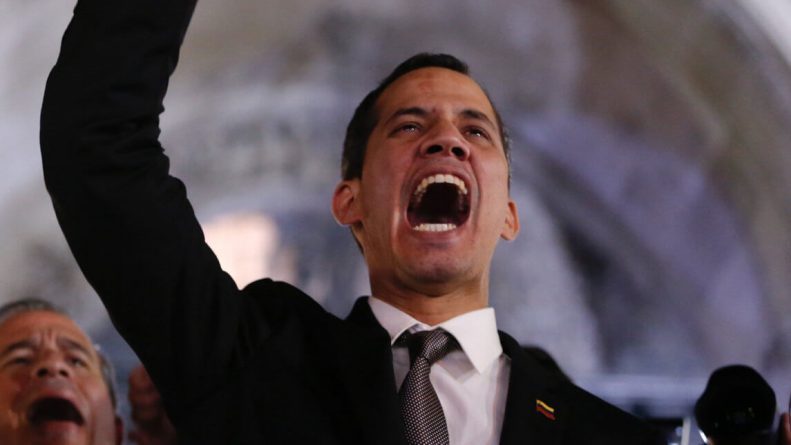 Self-proclaimed Venezuelan president Juan Guaido is to return to the country on March, 4 to lead new protests against President Nicolas Maduro’s government. In returning he is risking arrest, as he was prohibited from leaving the country by the Venezuelan Supreme Court.

The United States wishes to form as broad a coalition as possible to ramp up regime change efforts in Venezuela, according to U.S. National Security Adviser John Bolton during CNN’s State of the Union on March 3, 2019.

Meanwhile, U.S.-Proclaimed Venezuelan Interim President Juan Guaido is to return to the country on March, 4 to lead protests against President Nicolas Maduro’s government. In returning he is risking arrest, as he was prohibited from leaving the country by the Venezuelan Supreme Court.

In his travels abroad he visited Colombia, Brazil, Paraguay, Argentina and Ecuador and thanked them all for their support.

He also once more called on the Venezuelan military, claiming that many have defected, but it is necessary for all of them to join the opposition’s side because the chain of command is broken.

In a lengthy Twitter broadcast Guaido also warned that “If the regime dares, of course, to kidnap us, it will be the last mistake they make.”

Shortly after Guaido called for the protests and issued his warnings and allegations, John Bolton also reiterated U.S. support for him. Bolton warned that any threats or acts against the US-Proclaimed President’s safety would be met by a strong and significant response by the US and allies.

Venezuelan Interim President Juan Guaido has announced his planned return to Venezuela. Any threats or acts against his safe return will be met with a strong and significant response from the United States and the international community.

“We are trying to rally support for the peaceful transition of power from [Venezuelan President Nicolas] Maduro to [self-proclaimed interim president of Venezuela] Juan Guaido, whom we recognize as president […] I’d like to see as broad a coalition as we can put together to replace Maduro, to replace the whole corrupt regime. That’s what we are trying to do”, Bolton said during CNN’s State of the Union.

.@AmbJohnBolton on Venezuela: “I’d like to see as broad a coalition as we can put together to replace Maduro”@jaketapper: Do you not see US support for other dictators around the world undermines the credibility of your argument?

Bolton: “No, I don’t think it does.” #CNNSOTU pic.twitter.com/hJH9br8E6t

When asked if the “U.S. support for other brutal dictators around the world undermines the credibility” of his argument, Bolton said, “No, I don’t think it does. I think this is separate.”

He explained that the Trump administration is not afraid to use the phrase “Monroe Doctrine” in its aggressive Venezuela policy, referring to the U.S. foreign policy from an earlier era calling for its leadership in the Western Hemisphere through interventionism in the domestic policy of other nations in the region.

In this administration, we’re not afraid to use the word ‘Monroe Doctrine.’ This is a country in our hemisphere,” Bolton said. “Part of the problem in Venezuela is the heavy Cuban presence. 20,000 to 25,000 Cuban security officials by reports that have been in the public. But this is the sort of thing that we find unacceptable and that’s why we’re pursuing these policies.”

Russia opposes any and all interference in the internal affairs of other countries. In Venezuela, we support efforts – including those by representatives of the region – to foster dialogue between the government and the opposition. We continue to do so now… The result that Russia wants to achieve is peace in Venezuela. It can be achieved only through a respectful, inclusive, intra-national dialogue,” Medvedev said.

The prime minister added that all those who cared about the peaceful future of Venezuela should make effort to promote dialogue. He condemned the U.S. recognizing Guaido as legitimate Venezuelan president and damaging global dialogue.

Washington’s efforts have led the discussion of the socioeconomic situation, the legitimacy or illegitimacy of the presidential election in Venezuela, away from constructive dialogue to a completely different place. This, unfortunately, is often followed by chaos, unrest, and the complete destruction of the economy and trade. We have already seen this more than once in other countries.”

It also to his belief that increasing the intensity of political passion only goes against the people’s interests.

Statements come out of Washington about the possibility of military intervention. There are provocations on the borders. All this is very alarming and suggests that the policy of overthrowing any undesirable governments in the spirit of the Monroe Doctrine is once again becoming a priority for the United States.”