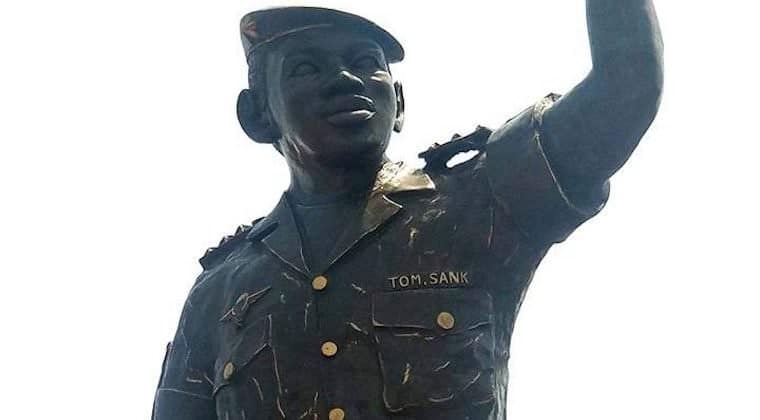 32 years after his murder, Captain Thomas Isidore Sankara whose name evokes memory, pride, pain and anger has been given a fitting memorial with a 5 metre statue in Burkina Faso’s capital Ouagadougou. Former Ghanaian President and friend of Sankara, Jerry Rawlings attended the memorial.

On Saturday, the 2nd of March, Burkina Faso (the land of the Upright People) unveiled a bronze statue in honour of the man that renamed their country from Upper Volta. The colonial name had no meaning to the people of the land other than the colonizers for whom it served as a geographical descriptor. The statue is part of the Thomas Sankara Memorial monument and was built on the very spot Sankara was murdered with his 12 comrades in 1987.

Sankara’s statue and busts of 12 of his comrades was made by a group of Burkinabé sculptors and was supervised by Jean-Luc Bambara. The statue stands five metres high on a four metres base. The memory of Sankara has mostly been celebrated and kept alive by Africans. Sankara’s assassination 32 years ago was one of the greatest political crimes committed on the continent. His bones were buried in a shallow grave, but his deeds and ideals were buried deeply in the minds of his people. His commitment to see a free Burkina Faso and a free Africa earned him admiration across the continent and globally.

Former Ghanaian President Jerry Rawlings joined Roch Kabore, the President of Burkina Faso in a solemn ceremony to unveil  the statue of Sankara. President Kabore said, “Through all of these works, we must through all the work he has done for this country, the personal commitment beyond his life, draw all the lessons for ourselves. and for generations to come, launched the Burkinabe president. The search for justice is under way and we are hopeful that we will manage to ensure that this case can finally be heard and that those responsible are known.”

Rawlings, a friend of Sankara, accepted an invitation from the Burkina Faso government in 2016 to chair a committee that would give Sankara a befitting memorial. At the unveiling of the statue, Rawlings said, “We have emotions on this site but we need to capitalize on these emotions to move forward. Those who fell here remind us that we are fighting for freedom and justice.”

During the United Nation’s 39th General Assembly session, Sankara famously declared, “I am neither a messiah nor a prophet. I possess no truths.” What Sankara saw of himself was however totally different of how his people and the people of Africa saw him and still see him, an exemplary political leader, who walked the talk and lived a selfless life. Sources URL: This is Africa