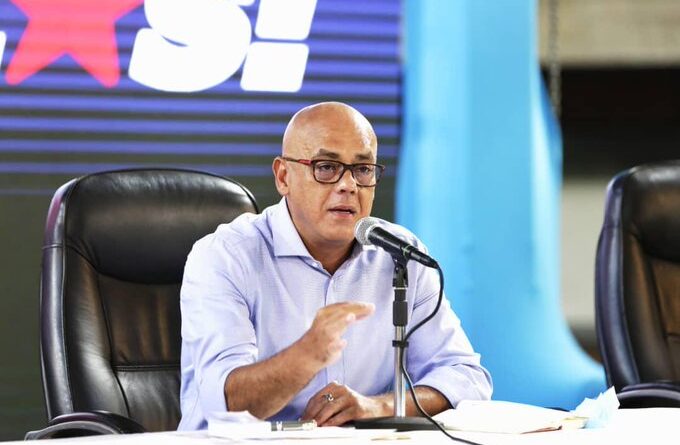 The Office of Foreign Assets Control (Ofac), under the United States Department of the Treasury, is allegedly depositing the sum of US$ 51,000 to far-right Venezuelan deputies so that they do not participate in the upcoming parliamentary elections.

The information was provided by Jorge Rodríguez, head of the “Darío Vivas” PSUV Campaign Command, who offered a press conference this Saturday from the open spaces of the Teresa Carreño Theater.

“We are going to publish the list of those deputies,” promised Rodríguez, who made a distinction between this action and others where opposition parliamentarians have been involved with receiving corruption money. “Before they were more cautious, before they were criminals who acted under the cover of night, now with the greatest impudence; they bought them for 51 thousand dollars and there is  proof,” he said.

Rodríguez ordered US and Venezuelan journalists to investigate the accounts of the deputies who received the money in US dollars. “Ask some deputies who did not accept to be bought,” he said.

Ultimas Noticias asked Rodríguez about the protests that have arisen in some states of the country, if they had a reason for being or were being ridden by violent groups for other purposes.

“There is only one form of protest: the protest of the people who sometimes take to the streets, with the constitutional right to protest. We have to accompany that protest and ask questions and seek solution mechanisms,” Rodríguez responded in the first instance.

The campaign manager continued developing the point and said that the candidates for deputies of the Great Patriotic Pole (GPP) “cannot hide from the protests of the people.”

Rodríguez stressed that protest is a constitutional right adding that when they occur they have to be addressed. “Sometimes the water does not arrive due to inefficiency, an indolence of an official … sometimes the gas does not arrive because there was a situation with the transport and maybe it can be resolved quickly, maybe we can seek the support of the Ombudsman’s Office,” he said.

Regarding the violent groups, denounced by the president of the Constituent Assembly Diosdado Cabello, Rodríguez responded that these operators have already been identified.

“We already know who they are in each state, how much they are paid, what their names are, who the ringleader is,” said Rodríguez, who pointed out to Freddy Guevara, “aka Richard Chayderman, who is still in his psychopathic drowsiness and is thinking like the psychotic person he is…”

Observers of the elections. Rodríguez announced that potential observers worldwide for the parliamentary elections have already been responding about their attendance at the elections.

Regarding the advancement of the presidential elections, as has been proposed by a sector of the opposition, Rodríguez responded that they will be held in 2025 as established in the Magna Carta.

“The rest is desperation, the rest is the absolute perception that the end is near, that January 5 is getting closer for all these who starred in a dark adventure that did a lot of damage,” replied Rodríguez who blamed the opposition leadership for blocking money for the purchase of food, medicines and supplies by promoting US sanctions and blockade.

“They dared to use the pandemic,” Rodríguez said after recalling that the Secretary General of the United Nations, Antonio Guterrez, called for a ceasefire in order to seek agreements and face the pandemic.

“That was the first thing President Nicolás Maduro did, even before the first case of Covid19 appeared: he called everyone and said ‘let’s put aside the political tirade, the controversies and we are going to pitch in together to attend to the people threatened by the pandemic. They saw it as an opportunity, they accelerated the Macuto mercenary landing on May 3, they did everything possible so that Venezuela could not respond to the challenges of the pandemic,” Rodríguez pointed out.