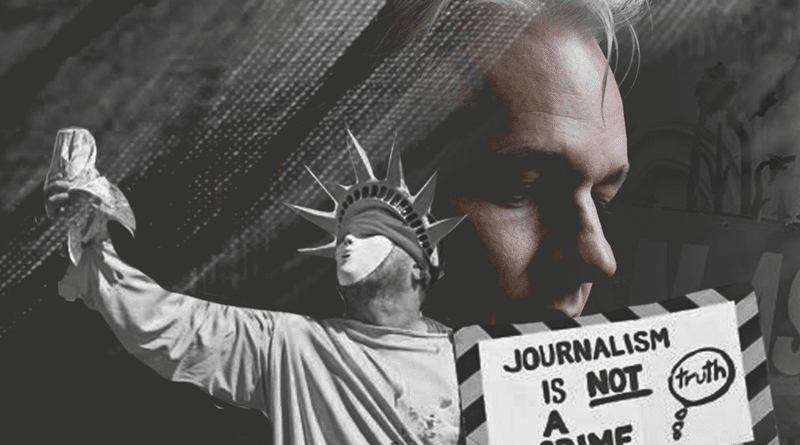 The travesty of Justice which we have witnessed in the persecution of Julian Assange has proven beyond all shadow of a doubt that there is no press freedom in the Western world.

Britains decision to grant America’s appeal, to have Julian Assange extradited to face 175 years in a deep dark windowless dungeon, in isolation, in the most inhospitable hole in the ground the American penal system can find, where most likely he will be waterboarded to gain information on anyone else who might hold power to account over past and present US-NATO war crimes, is nothing more than the latest stain on Britains Judiciary, who claim to be the arbiters of all that is good, wholesome and democratic.

Britain, which claims to be the home of democracy, is nothing more than the facilitator of oppression and injustice which can be verified by a simple cursory look at its slave-trading history, its colonial past, its current political sanction policies, and its shameful prosecution of a man who the world rightly sees as a hero of press freedoms, a voice of the voiceless, a stalwart of democracy and a defender of the truth.

Nous Sommes Julian Assange
Those who expose war crimes like Chelsea Manning and Julian Assange are censured and demonized, called unpatriotic and accused of putting allied troops lives in peril, yet those who murder or send others to bomb, maim, torture, shoot, and kill on their behalfs, like Tony Blair and George W. Bush, are above the law, exempt from criminal prosecution, living the lifestyles of millionaires, while those they have murdered shot and bombed lived on a few dollars a day.

Innocent people end up in prison while the guilty walk free.

Democracy and decency are turned on their heads when the system needs sacrifice and scapegoat.

The world doesn’t look at the war crimes committed by US and NATO  troops in Afghanistan Iraq, Libya, Syria, to name but a few; it watches the pound of flesh demanded from the truth seekers as atonement for disclosure.

The travesty of Justice which we have witnessed in the persecution of Julian Assange, the 50-year-old journalist and co-founder of WikiLeaks, has proven beyond all shadow of a doubt that there is no press freedom in the Western world. It could be argued, there is no press freedom in many regions of the world but the cruel unjust demonization and vilification of an honest, sincere, just, moral crusader for the truth, proves for all those who do not already know, holding power to account can be a very dangerous pastime. Such a quest for the truth can lead to a very dark place, as leaving the safety of the community of writers of consensus, standing alone, losing one’s freedom, one’s sanity, one’s dignity and one’s future is a very heavy price to pay for a man of principle.

It is only in the last decade that I personally have begun to seek out alternative Media, to avail of the myriad of publishers in print, on the airwaves, and on the internet, to find a counterbalance to the narrative that I have read in the daily western papers, watched on the daily western television news programs, and listened to on the daily radio talk shows, that sometimes pass for light entertainment but are also used by state media to control the narrative of public debate around crucial world political developments.

Since I have been old enough to read, I believe I have been manipulated by the mainstream Media into joining in the consensus created, sometimes by the government, other times by the deep state and on many occasions by influencers who also want to control the public narrative to support their political agenda.

The breakup of the former Yugoslavia is a perfect example of how the west manipulated public opinion into accepting the bombing of Serbia, while Iraqi weapons of mass destruction were another state-fuelled lie.

Julian Assange chose to fight for truth and justice. He walked in the shadows of the Twilight Zone, between the darkness and the light. His job, as he saw it was to bring the truth of war, with all its crimes against humanity, to the international court of public opinion. He exposed the lies of the government perpetrated in our name when he exposed some of the US military war crimes in Afghanistan.

While mainstream media acted as cheerleaders in the wars on Afghanistan, on Iraq, on Libya, on Syria, they disguised the real human cost of war as humanitarian interventions to save lives.

While the truth is very far from the sanitized reality of Western media propaganda coverage of these events, Edward Snowden, Julian Assange and Chelsea Manning exposed the truth of how war dehumanizes the victims, destroys the combatants, and the ultimate price is paid in human lives, human dignity, human morality, and human kindness.

Julian Assange who has been railroaded by the British government, British judiciary, the British police and the British Parliament, is the victim of a travesty of Justice. An abuse of authoritarian power by those who govern us.

Julian Assange should be seen as a true hero of the 21st century, a modern visionary, a prophet for truth and freedom and the best example of journalism to be found anywhere in the world.

The trial and prosecution of Julian Assange have a dual purpose. On one level, it is revenge by the US government and administration against Julian Assange and Chelsea Manning in order to destroy their credibility and continue to keep secret the war crimes committed in our names by many western governments, chiefly Britain, France, Germany, Australia, Canada, and US. The second part of this constructed attack upon Julian Assange is designed to frighten anyone who would dare stand up against the racist fascist authoritarian regimes now governing western nations. The punishment of Julian is nothing more than a warning to others to stay quiet, to stay obedient, and to stay in line.

The truth of war is death and destruction
They say truth is the first casualty of war, and it is because if we the people, really knew what they did in our names, for the benefit of big business, the military-industrial war complex, and the corporations who increasingly sponsor our political elites, we would demand they stop.

Two million people could not prevent Blair from taking Britain into an illegal concocted war against Iraq.

One man nearly succeeded where so many others have failed.

Julian Assange is a hero.

Julian Assange is a fighter for truth.

Words are inadequate to describe the horrors he will undoubtedly face and they cannot articulate the depth of depravity that sees this man extradited to America.

Julian Assange is all of us.

God give him the strength to face the ordeal that awaits him.

We are led by liars, hypocrites and warmongers. Pursuant of personal power, personal wealth and personal aggrandizement.

Democracy has died many times over, in the various colonisations and occupations in the history of the world.

It died with every genocide, every man-made famine, siege, collateral damage and it died in Afghanistan the day they murdered unarmed people on the streets.

It died on the day they exposed the Afghan war logs, and it died on December 10, 2021, on International Human Rights Day.

Democracy is dead. The guilty are free and the innocent are facing death in jail.