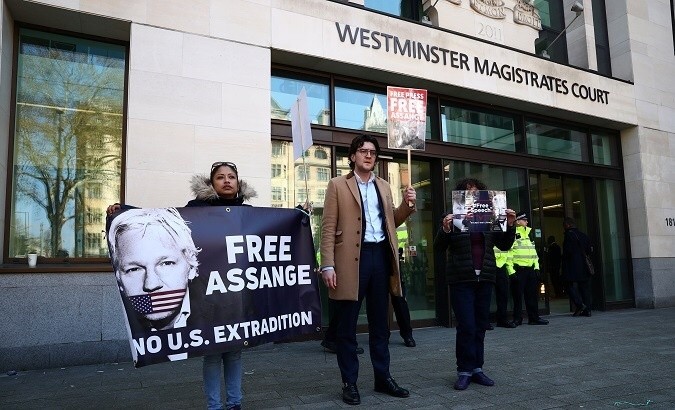 “The hand of ‘democracy’ squeezing the throat of freedom,” Maria Zakharova exclaimed regarding.

Legal experts, human rights activists and several governments decried the arrest of co-founder of WikiLeaks Julian Assange Thursday in London at the embassy of Ecuador, a South American country where he was granted asylum in 2012 by former President Rafael Correa.

RELATED CONTENT: Assange Has Been Arrested For US Extradition. The Time To Act Is Now.

“Julian Assange did not ‘walk out of the embassy’. The Ecuadorian ambassador invited British police into the embassy and he was immediately arrested,” WikiLeaks said in reaction to events.

Many voices immediately criticized the Ecuadorean government’s decision. One of the first reactions came from Russia’s Foreign Ministry spokeswoman Maria Zakharova who criticized the arrest and pointed out that “the hand of ‘democracy’ squeezing the throat of freedom.”

U.N. human rights experts rallied to Julian Assange Thursday, criticizing Ecuador and Britain over his arrest and warning of grave consequences should he be extradited to the United States.

The United Nations special rapporteur on arbitrary, summary or extrajudicial killings, Agnes Callamard, said Ecuador’s decision “has exposed Assange to a real risk of serious violations of his human rights”.

Separately, the U.N. rapporteur on the right to privacy, Joe Cannataci, said he would not change his previously announced intention to meet Assange later this month or to investigate his claims that his privacy had been violated.

The arrest merely means that “instead of visiting Mr Assange and speaking to him at the Embassy of the Republic of Ecuador in London, I will visit him and speak to him in a police station or elsewhere in the UK where he may be held in custody,” Cannataci said in a statement.

“The decision of the Ecuadorean government to hand over Assange to the UK police is a clear violation of his Ecuadorean citizenship and asylum rights. Ecuador has failed in its duty to protect its citizen.”

“Assange’s arrest will put him at risk of extradition to the US, where he will very likely face charges that could see him jailed for 30 or more years. A secret grand jury has been convened to prepare an indictment against Assange and key Trump officials have said that prosecuting Assange is a priority.”

“Assange did not leak anything. He published the leaks of Chelsea Manning, as did The Guardian and New York Times. Why is he being signaled out?”

“Assange published evidence of American war crimes. He’s a hero, not a criminal.”

“The greatest traitor in Ecuadorean and Latin American history, Lenin Moreno, allowed the British police to enter our embassy in London to arrest Assange. Moreno is a corrupt man, but what he has done is a crime that humanity will never forget.”

“‘Sovereign decision’, beautiful label for treason, foreign police entrance in our Embassy, and the delivery of an Ecuadorian citizen. So much cowardice and human misery have seldom been seen! The story will be relentless with those guilty of something so atrocious.”

“Any prosecution by the U.S. of Mr. Assange for Wikileaks’ publishing operations would be unprecedented and unconstitutional, and would open the door to criminal investigations of other news organizations. Moreover, prosecuting a foreign publisher for violating U.S. secrecy laws would set an especially dangerous precedent for U.S. journalists, who routinely violate foreign secrecy laws to deliver information vital to the public’s interest.”

“Assange’s critics may cheer, but this is a dark moment for press freedom.”

“The United Nations formally ruled his detention to be arbitrary, a violation of human rights. They have repeatedly issued statements calling for him to walk free—including very recently.”

“Assange has been arrested in relation to a US extradition request for “conspiracy with Chelsea Manning” for publishing Iraq War Logs, Cablegate, Afghan War Logs, precisely the persecution for which he was granted asylum under the 1951 Refugee Convention in 2012.”

“This man is a son, a father, a brother. He has won dozens of journalism awards. He’s been nominated for the Nobel Peace Prize every year since 2010. Powerful actors, including CIA, are engaged in a sophisticated effort to dehumanise, delegitimize and imprison him.”

“Our solidarity with brother Julian Assange who is being persecuted by the U.S. government for revealing the truth about human rights violations, murders of civilians and diplomatic espionage against sovereign countries.”

The President of the Catalan Autonomous Government Joaquim Torra

“Solidarity and support for Julian Assange. Respect for freedom, and especially freedom of expression, must be the pillars of the European Union. And thank you for supporting the Catalans in the fall of 2017.”

“All my support and solidarity to Julian Assange and my personal affection before this unjust situation. The European Union must protect fundamental rights and must guarantee that the defense of freedoms always has protection.”

“They did not arrest just one man today. They arrested a way of understanding journalism and freedom. He was with us and we will be with him. We will closely follow his procedural situation and ask for a clear positioning to the Spanish government. Freedom for Julian Assange.”