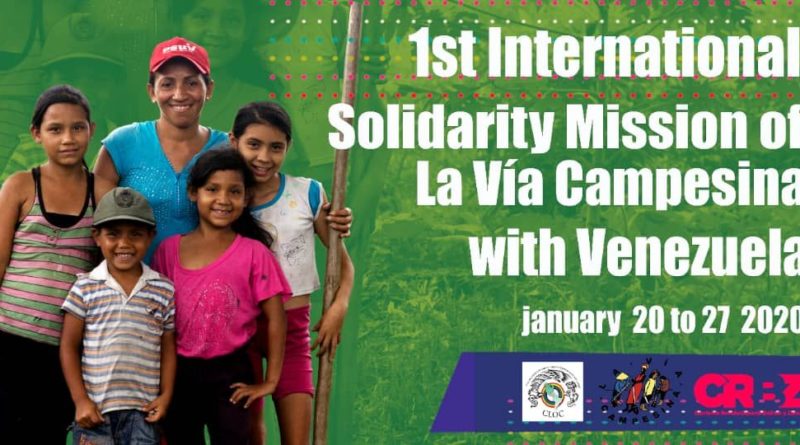 Overthrowing the Bolivarian Revolution is one of the US government’s plans to regain its control, dominance and oppression of Latin America.

Today, Venezuela is the target of a hybrid and multidimensional (economic, financial, diplomatic, media and military) aggression, which is seriously impacting the life of the country and its people. This offensive has benefitted from the support of governments serving the interests of the United States and of stateless and elitist internal political forces. This is the context in which La Via Campesina’s First International Mission of Solidarity with Venezuela will take place from January 20 to 27, 2020. This mission seeks to show the effects of the blockade and shed light on the numerous popular organization resistance experiences. The Mission is organized together with the Bolívar and Zamora Revolutionary Current and the Ezequiel Zamora National Peasant Front, a local member of the movement.

In recent years, in the midst of extreme difficulties, the Venezuelan people have resisted and stood strong, fighting against adversity, building organizational, solidarity and productive alternatives and striving to strengthen Food Sovereignty in their territories. Zuleima Vergel of the Political Coordination of the FNCEZ stressed that “the institutional firmness of the Bolivarian Government and the Venezuelan State in defending democracy and sovereignty, the unity of the patriotic political forces, the civil and military unity, as well as the high consciousness and political clarity of the Venezuelan people, have all been key factors to defeat the US-led plans and conspiracies against Venezuela”.

In Venezuela’s extended battle for sovereignty, democracy and peace, decisive and effective international solidarity have played a prominent role. La Via Campesina has been instrumental in denouncing US interference and blockade. In addition, most of the planet has rejected systematic blockade and aggression against Venezuela. International and multilateral organizations, numerous governments throughout the world as well as social organizations have demonstrated their solidarity. These are all organized expressions of people who are fighting for their rights and the construction of a world freed from hegemony and imperialism, a world of justice, respect and equality.

In this sense, the La Via Campesina Mission aims at getting to better understand Venezuela’s reality, the impact of the economic and financial blockade imposed by the United States and its effects on peoples’ lives. The Mission will also allow us to get a closer look at the other side of this reality: solidarity, the capacity of resistance and the alternatives that popular movements and organizations have been able to build as a response to the aggressions and the crisis.

The La Via Campesina delegation participating in this Venezuela solidarity mission is made up of representatives of the National Association of Rural and Indigenous Women, ANAMURI of Chile, the Association of Rural Workers, ATC of Nicaragua, The Farmworker Association of Florida (FWAF) from the USA and the Coordination of Farmer and Rancher Organizations (COAG-ECVC) from Spain. Their tour will allow them to learn about the different productive, community and popular solidarity experiences in the states of Lara, Barinas and Apure, as well as meet and exchange with Venezuelan social and political organizations. The delegation will also include a Communications Collective made up of independent journalists and alternative media such as Alba TV and Radio Mundo Real.

The First International La Via Campesina Mission of Solidarity of with Venezuela also aims to be a strong example of how the people can contribute in a concrete way to the necessary construction of a multi-centred and multipolar world. It is an example of how people are able to break Imperialism’s media and political siege.

Likewise, with this action, La Via Campesina maintains that close, fraternal and solidarity events such as this Mission are the way to strengthen the unity of the peoples of the world in building a world of freedom, justice and equality. “Thus, by building bridges, creating ties and opening paths, we will make the truth of the peoples prevail over the lies and manipulations of the planet’s economic and political elites in their eagerness to keep us subjugated and subdued,” concluded Nury Martínez of the Political Commission of the Cloc—Via Campesina South America.