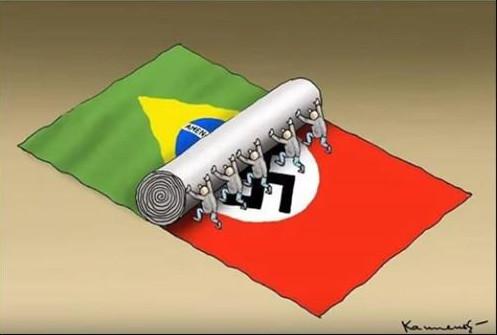 Supported by members of the G7-NATO, on the periphery of the system the fascists (and elites in general) do not identify with the nation in which they live

The philosopher and professor of the University of San Pablo, Marilena Chauí, in a recent article on the new ultra-reactionary movement (which grew with the capitalist crisis, although it is already beginning to lose vigor), affirms that this neoliberal extreme right can not be called “fascist”, since it practices, according to the rules of the Washington Consensus, the weakening of the State, the surrender of national heritage, and not “nationalism” (which has characterized the Italian-German classical fascism of the first half of the twentieth century).

However, in this respect (perhaps secondary in her article, more important in the historical moment), it seems to me that the committed teacher, who has already formed so many critical generations – including mine -, is now mistaken.

Fascism: the face of capitalism in times of loss of social control

Fascism is nothing more than a card under the capitalist sleeve, used at a time when the electoral farce called “liberal democracy” no longer functions in its purpose of conserving immediate gains. Thus, there is an appeal to hatred towards the Other, to xenophobic-racial and gender-based violence, to media blaming of everything that is different or that proposes something different from the current unfortunate situation. With this, elites can justify greater social control of the population (or more specifically, of workers).

If in the 1930s the capitalist powers were in conflict, and capital still had a certain “nationality”, giving contours to the apparent “nationalist” characteristic of fascism, however, now the situation is different. The new neoliberal capital management is “global” and no longer allows such internal disagreements among its operators.

An intercapitalist dispute, at this time of the structural crisis of the system could result in a prolonged recession, a problem already raised by the trade dispute between the two main geopolitical powers of today: the United States and China. Although it can be objected that China is not capitalist (and in fact it is not, given its reformist planned distribution of internal wealth), when it comes to foreign trade, the Chinese national-developmental government acts in the international market respecting, as it could not cease to do, the rules imposed by hegemonic capitalism. And even the Chinese state acts with more skill and organization than the “internally” capitalist countries themselves, due to their capacity for social planning and monetary regulation. For this reason, the heads of the “center” of the system now want to change the rules – the “center” is directed from Washington, but also made up of the secondary powers (European) that make up the main forces of the economy (G-7), and whose military arm is the nuclear and intrusive NATO.

The fascist is racist, not nationalist

In its foundations, fascism (which in Germany was sophistically called “national-socialism”) is neither “national”, much less “socialist.” The greatest identification that unites the sick of the spirit, their adherents, is based mainly on a poor and anti-scientific “racial” discourse – as true as the flatness of our planet or journalistic impartiality.

Fascism is an instrument of capitalism in times of crisis. In the past, so-called classical fascism had a “national” face, since the capitalist company did not yet have its unified administration and there were national interests in the dispute over leadership – a prerogative that is only of the powers, since the peripheral states, like those of our America, have never been able to develop an effective “nationalism” beyond patriotisms that, closely watched, always point to external interests (formerly of the European colonizer, today especially the Yankee neocolonizer).

However, in contemporary neoliberal capitalism, with virtually unified world rules and finances, big capital is associated with itself. It is not surprising that the big banks and the key corporations of the central nations of capitalism (USA, Europe, Japan) do not fail, since their bankruptcy would shake the floor of the joint machinery of the market system.

As for the dominant nations, those that drive “globalization” in the sense of the competitive advantages of their corporations, it is possible to find in their fascism, even today, elements that can be considered minimally “nationalist”: see Trump and his attempts largely protectionist failures of the “national” transnational corporations of the United States (which does not mean protection of the American people).

However, in Brazil and on the periphery of capitalism, fascism, this form of authoritarian and irrational government (and it is worth reiterating – introduced by capital in times of social disorganization, when the demoralized “formal democracy” is threatened electorally), Fascism has nothing of “nationalism” – even a large worldwide company like Brazil’s Odebrecht may be on the way to bankruptcy.

On the capitalist periphery fascism more shows its face

In a nation with a process of independence as incomplete as Brazil (a fact that extends to Latin America as a whole), the fascist practice must be, and is, necessarily different from that of the central powers.

For our lands, the revolution of independence never advanced the aspect of “formal politics”, leaving the country with a deeply dependent – and subaltern – position in the economic, military, geopolitical, judicial spheres …

See today the “Brazil of the future” that was already talked about: a nation-joke in which the elites of state-judicial-parliamentary-military functionalism, in collusion with their external bosses and respective state intelligence agencies, sacrifice our own equity and “our” own strategic companies (with national majority capital) in exchange for meager bribes and shameful awards in a spectacular outdoor setting.

Our capos of internal capitalist mafia, associated under international capital, have no interest in “nationalist” bravado, especially since, having historically introjected their Vassal roles, live on the alms from their practice of surrender.

Aspects of fascism: this disease of capitalism

In fact, it is in the crudeness of the peripheries of capitalism – as the brilliant thinker Florestan Fernandes has warned – where one can, in advance and more clearly, observe the disastrous consequences of the current system. This is also the case with fascism, that gross face of the modern-bourgeois disaster, whose foundations can be better verified in weak states like ours in America.

Fascism must be analyzed in its complexity of elements – as a social and spiritual disease that, founded on a foolish mysticism, leads to irrational attitudes: violent, bestial, dishonest, non-scientific. And this, both individually and collectively: a pathologically cowardly mode of behavior that, due to the fear it has of the strength of the Other (of whom, in its intellectual limitation, it virtually has no knowledge), hits it from behind.

Individually, it is a superficial, childish, fearful mental state, a psychic tumor that sometimes degenerates into a perverse social situation; in acute cases, it becomes an extremely authoritarian economic practice and political power, according to which it submits to the “totality” of society. It is therefore, as Marilena Chauí points out, a “totalitarian” regime: as is any neoliberal regime (with or without the merely formal electoral theater of “democracy”).

Its essential objective is the defense of the wobbly structures of capitalism in crisis, although in this escalation (which necessarily goes through irrational elements present in the popular imagination) the fascist project generally escapes the “rational” control of its liberal shareholders, causing damage to the very capital that promoted it.

European Union: from sponsor to critic of peripheral fascism

An example of the chaotic loss of control, typical of fascism, is what we are witnessing now in the Amazon Forest, increasingly burned by the stupidity of the subaltern Nero occupying the Brazilian government.

As it is public and known today, the Brazilian right-wing fascist was “elected” by a prolonged coup d’etat, an intricate plot that from the beginning was supported by the huge propaganda machine of the transnational communication companies (European corporations linked to the powerful members of the G7 and NATO: BBC, EFE, Reuters, AFP, El País).

These communication companies are subjected to the powers of the EU – being largely supported by their strong governments (these now questioning the “Brazilian ability to administer the Amazon”). And their influence is increasingly intimate in the peripheral national territories (with editions, if not in Portuguese, at least in Spanish).

“Interestingly,” since the start of “our” coups, all these corporations have openly supported the “Latin American spring”, this trap centered on our show of the absurd: the “fight against corruption” (which does not move beyond a process of sabotage against the nationalist reformism that grew up here). Its publishers, for years and years, have always defended the weakening of our national states (and, of course, the strengthening of their own states).

Thus, firstly by becoming the heroes of freedom against the “dictatorship” of Chávez (elected and re-elected), European conglomerates (state-owned or sponsored by their strong states) move to the severe criticism of “populism” (elected and re-elected ) of Kirchner, and then they arrive (when it seemed appropriate) to the censorship of the “personal deviations” of Lula-ism (elected and re-elected). In sum: an interested media manifesto against the electoral power of the national-reformist tendencies of America that grew and looked more and more towards Eurasia (Russia, China), in spite of the weakened Western Europe.

In fact, the BRICS alliance, which has long since shaken Europe, embodies the power of these national-reformist projects in their quest for greater national autonomy (or “real independence”), and for the confrontation of the G7 ( on the way to geopolitical multipolarity).

Brazil: the fascism of elites without a homeland

The perverse legend of the “superior race” (also present in so many religions that are being forgotten by the gods) certainly continues to exist as a central part of the fascist dogma: this doctrine based on hatred of the Other, on the blaming of that which is different (who is accused of its own personal or system failures).

However, in Brazil (and in so many nations of incomplete independence, like ours), the elites – these “elect” of the system – have nothing of “nationalists.” Our dominant classes (where fascist worms are raised) are stateless: Brazilians (or Latin Americans) only by birth, by chance, by “bad luck”, who knows even by “soccer team”, but whenever possible in search of a second “gringa” nationality that moves them further away from the townspeople – mestizo, black, indigenous – whom they despise and with whom they have never identified (since, as Marxist José Carlos Mariátegui observed, they always see themselves mirrored in the European phenotype and culture).

In summary, the so-called “vital superiority” of the fascists (the “elect” of the religion of capital) is a dogma that remains.

However, in Brazil (and other semi-nations like ours), this tragic “brotherhood” – which usually identifies the fascists – is not related to the “nation” (which they despise), but to the ethnic group (and the skin color, as Aníbal Quijano shows it well). They identify with those that seem “whiter” or “more European” than they are, that is, with those that come from outside (or from “above” the system)… From “la gringa”, as they say in Brazil. But never with the people.

Yuri Martins-Fontes is a philosopher, a doctor in Latin American history (University of San Pablo), post-doctorate in Marxist ethics and in work history, is a professor, researcher and writer; author of “Marx na América” (Alameda, 2017), and “História e Lutas Sociais” (EDUC, 2019). Coordinates the PRAxis Core of the USP and collaborates regularly with independent critical media.