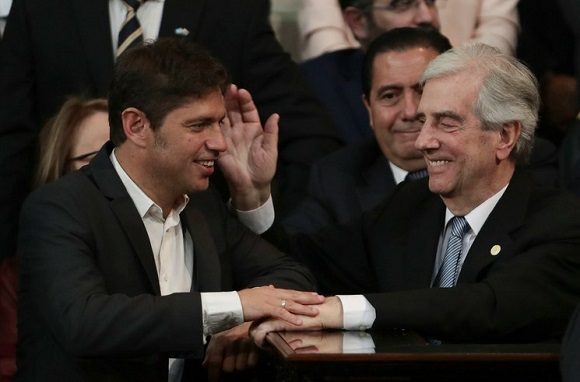 A day after his inauguration, Argentine President Alberto Fernández met with his Cuban counterpart Miguel Díaz-Canel, and with Michael Kozak, the envoy of US President Donald Trump, while in La Plata, province of Buenos Aires, Governor Axel Kicillof and Deputy Governor Verónica Magario assumed their new posts, with announcements of important measures, as did some national government ministers who occupy strategic areas.

As an anecdote of what Vice President Cristina Fernández de Kirchner warned Fernández on Tuesday of the “inheritance” he received of a “devastated country” and “scorched earth”, the president had to receive his first guest on this extremely hot day in an office without air conditioning, because ex-president Mauricio Macri took among other things the electrical equipment.

Kicillof confirmed that like the nation, the province was in default (cessation of payments) and there was a power outage that affected thousands in Buenos Aires, despite the fact that the Chilean company Edesur and its subsidiaries increased rates by more than three thousand percent to make investments and avoid blackouts.

The newly elected Buenos Aires governor, who comfortably beat his predecessor María Eugenia Vidal, said he will declare an emergency in the largest and most populous province in the country, will suspend the rate increases arranged by the government that ended yesterday. “What Vidal left, among other things is cash on hand of 25 billion pesos, which is not enough to cover next month’s obligations that add up to 50 billion pesos, in addition to a very high unemployment number, poverty, debt and excessive inflation”.

The Province of Buenos Aires Bank was also affected, whose workers denounced the now former governor, in addition to the very serious situation of industry and commerce, which he described as “dramatic” and promised to work tirelessly. “What was applied here was a model of financial valuation, indebtedness and capital flight,” he said.

Meanwhile, Fernandez had lunch with Michael G. Kozak, deputy secretary of the Office of Western Hemisphere Affairs of the US Department of State, who was willing to have his country help Argentina in the negotiations for the restructuring of the debt with the International Monetary Fund and discussed the need to strengthen bilateral relations.

In an official message from the presidency it was reported that “they agreed to create a permanent consultation system to work in coordination between the two countries.” It was also known that not discussed in the meeting waa the decision of Mauricio Claver, presidential envoy and director of National Security for the Western Hemisphere, to precipitate his departure from Argentina allegedly because he felt “affected” by the presence at the inauguration of the Venezuelan minister of Communication, Jorge Rodríguez.

In this regard, the government remarked that the president “can invite Argentina to whoever he wants. ” The meeting was also attended by the US ambassador in Buenos Aires, Edward C. Prado, the political advisor Chris Andino and the advisor Mariju Bofill. And on the Argentine side were Foreign Minister Felipe Solá, Secretary of Strategic Affairs Gustavo Béliz and Jorge Argüello, who could be the Argentine ambassador to Washington.

Resolve the default
“We came to solve the problem of a virtual default (cessation of payments) left by the previous administration,” said Economy Minister Martin Guzman, very close to Nobel laureate Joseph Stiglitzt, during his first press conference and noted that in 2020 “it is not a year in which fiscal adjustment can be made” and added that “ it does not work to attack inflation only with monetary policy”.

Guzmán, who has already had a dialogue with IMF officials, said that in that agency “there is recognition of the failure of the previous program” and stressed that the Fund also admits “the serious economic situation in Argentina.”

“The macroeconomy is in a very fragile state, navigating a very thin corridor” and estimated that at the end of 2019 inflation will be around 55 percent and with high levels of poverty, unemployment and destruction of companies.