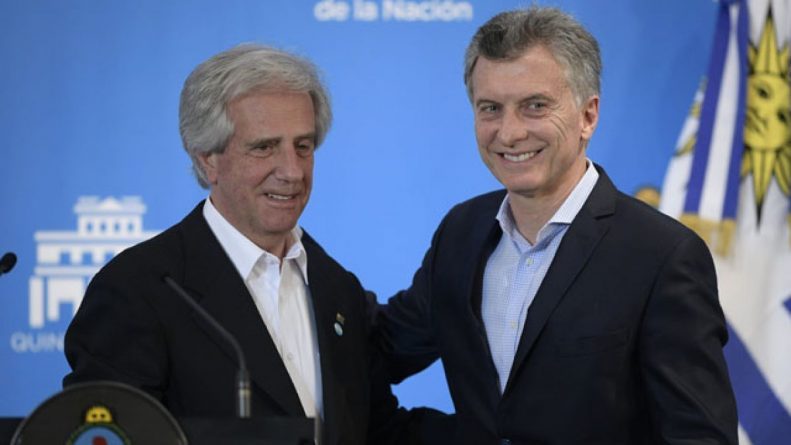 The Argentinian government wants to have it both ways.

The High Representative of the European Union for Foreign Affairs, Federica Mogherini, picked up the phone and called a South American president to talk about the situation in Venezuela and possible diplomatic solutions to the conflict. Argentine President Mauricio Macri listened to the proposal and “strongly recommended” her to contact his Uruguayan counterpart Tabaré Vázquez, officials and diplomatic sources said.

Macri, who has been one of Nicolás Maduro’s biggest critics, told Mogherini that Vázquez is someone “very reasonable” and that “it would be good” to involve him in an eventual negotiation with Maduro, the informants said. The European representative responded to the suggestion and on Monday 28 she contacted the Uruguayan president. Vázquez said that day to the VTV channel that from the European Union had offered Uruguay the possibility of hosting an instance of international dialogue to find a way out of the Venezuelan crisis.

The Executive Power accepted and now that meeting has a date. Yesterday, the Foreign Ministry issued a statement in which it reported that together with Mexico and -in virtue of the neutral position that both have adopted against Venezuela they had decided to organize on February 7 in Montevideo -an international conference with representatives of the main countries and international organizations that have shared this position in the face of the conflict in that country.

Both governments have adopted a non-intervention position, while at the same time they have expressed concern about the human rights situation in Venezuela. Therefore, they have decided to call for an inclusive and credible dialogue that will solve once and for all the delicate situation that our Venezuelan brothers face,” the statement said.

He adds that they expect to have more than 10 countries and international organizations in the activity, although it does not clarify what or the diplomatic level that the discussion will have.

The Uruguayan government was in contact yesterday with the Europeans to continue coordinating the work, said Foreign Ministry sources.

These diplomatic movements come at a time when tension over the crisis in Venezuela is at one of the highest points, both inside and outside the country. In addition, it allows the Uruguayan government to show that its approach to the issue has important support in the face of opposition criticism.

Movements: The self-proclaimed “president in charge” of the head of the Venezuelan National Assembly, Juan Guaidó, on Wednesday, the 23rd, unleashed a series of movements that left almost no country indifferent. While most of the governments of the region and the United States decided to recognize Guaido as legitimate president, Russia, China, Turkey, Nicaragua, South Africa and other countries expressed their support for Maduro.

Uruguay, together with Mexico, offered to be a “dialogue channel” to try to reach a diplomatic solution to the conflict. A joint statement called for “all actors to find a peaceful and democratic solution to the complex panorama facing Venezuela.” For that, they proposed a “new process of inclusive and credible negotiation, with full respect for the rule of law and human rights.”

The position of the Vázquez government was strongly criticized by the opposition, which expected Uruguay to bow to the Lima Group and recognize Guaidó as the president.

The Uruguayan diplomacy defended the position adopted by the Executive Power in the international spheres in which the subject was discussed. Thus, when on Saturday 26 the United Nations (UN) Security Council debated the crisis in Venezuela at the urging of the United States, the Uruguayan representative, Elbio Rosselli, said that “the worst solution for the Venezuelan people is to deepen” the international involvement “on that country. He demanded that they reduce – tensions and avoid an escalation of violence. The diplomat closed his speech saying that Uruguay was never going to support -an armed intervention in any country in the region as a pretended solution to an internal crisis‖.

During the debate, the United States, Germany and Great Britain, among others, insisted that Maduro is not the legitimate president because the elections that led him to assume a new mandate were rigged [without presenting any proof in that sense]. Russia, for its part, questioned the “dirty game” of the Americans to bring the Venezuelan issue to the highest political decision-making body of the UN. -If something represents a threat to peace is the brazen and aggressive stance of the United States and its allies focused on deposing the legitimately elected president of Venezuela, declared Russian Ambassador Vassily Nebenzia.

Following that discussion, the Donald Trump government announced new economic sanctions against Venezuela. On this occasion he pointed to Citgo, the US subsidiary of Petróleos de Venezuela (Pdvsa), responsible for providing billions of dollars every month to the coffers of the Maduro government. That measure, according to experts and diplomats, can be a deadly blow to the country’s economy.

The representative in Venezuela of the Washington Office for Latin America (Wola, for its acronym in English), Geoff Ramsey, told Deutsche Welle yesterday that “the pressure alone will not solve the crisis.” Ramsey, who worked in Montevideo years ago, said that – “a democratic exit must go through Uruguay and Mexico, which must be part of the contact group proposed by the European Union.”

The position of the Europeans is complex. When on 10 January Maduro assumed his new term, the European Union regretted that the Venezuelan president remained in office after undemocratic elections and said he recognized the National Assembly led by Guaidó as a legitimate power in that country. Countries such as France, Germany and Spain went further and announced that they will recognize the legislator as “president in charge” if there are no new elections.

At the same time, while Mogherini tries to coordinate the “contact group” with Vázquez on that subject -to whom he conveyed that there was no consensus in the European Union to recognize Guaidó-, the European Parliament is preparing to establish a position. The decision to be discussed today, would imply recognizing the leader of the National Assembly and shot after Maduro said he was willing to discuss a call for legislative elections, but not presidential, reported yesterday Deutsche Welle.