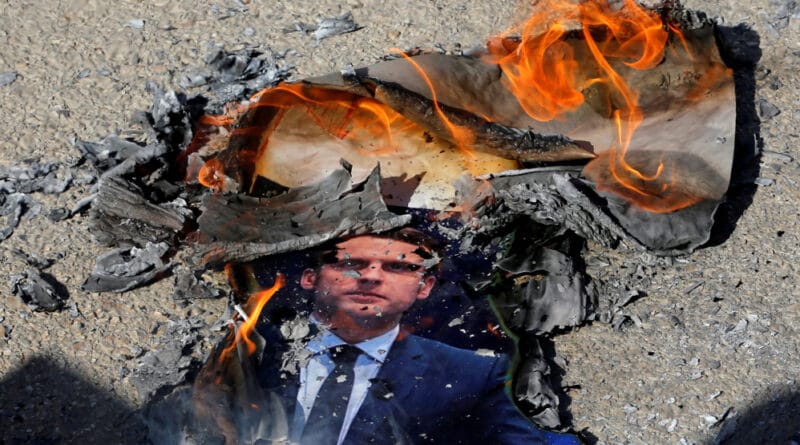 Anger continues to grow across the Muslim world after French President Emmanuel Macron publicly attacked Islam in defense of the publication of derogatory cartoons of Prophet Muhammad (PBUH).

Earlier in October, France led a national tribute to a teacher, who was recently beheaded by a Chechen teenager after showing his class the offensive caricatures.

The president said he would not “renounce the caricatures.” He described Islam as a religion “in crisis” and declared war on “Islamist separatism,” which he claimed was taking over France’s estimated six-million-strong Muslim population.

The comments have angered not only the Muslim community in France, but all Islamic nations, leading to protests, boycott calls and diplomatic condemnations in the Middle East and the broader Muslim world.

On Tuesday, tens of thousands of people took to the streets in the Bangladeshi capital Dhaka to express their anger at French President Emmanuel Macron’s comments.

More than 40,000 people took part in the march organized by Islami Andolon Bangladesh (IAB), one of the largest Islamic parties in the South Asian country.

During the march, which started from the Baitul Mukarram national mosque, the protesters called for a boycott of French products and burnt an effigy of the French leader.

They chanted “Boycott French products” and called for Macron to be punished.

“Macron is one of the few leaders who worship Satan,” Ataur Rahman, a senior IAB leader addressed the rally at Bangladesh’s biggest mosque.

Rahman also called on the Bangladesh government to “kick out” the French ambassador, Jean-Marin Schuh.

Another Islami Andolon Bangladesh leader, Hasan Jamal, said activists would “tear down every brick of that building” if the envoy was not ordered out.

“France is the enemy of Muslims. Those who represent them are also our enemies,” Nesar Uddin, a young leader of the group, said.

Hundreds of police officers used a barbed-wire barricade to stop the protesters from getting close to the French embassy.

Demonstrators marched down other streets after police intervened, chanting “Boycott France” and “Macron will pay a high price.”

On Monday, hundreds of people staged rallies outside the French embassy in Iraq to condemn the move. The protesters burned France’s national flag near the country’s diplomatic mission in the capital Baghdad, in the latest display of anger in the Muslim world over the images and Macron’s comments.

The demonstrators also held up posters showing caricatures of the European leader and chanted slogans in support of the Prophet.

“These ( Macron’s) statements jeopardize global security and harmony since they damage the coexistence between different religions. We condemn these statements and we ask the French president to apologize to all Muslims,” Abu Ayman, a protester, said.

Aqil al-Kadhemi, a cleric at the rally, also demanded an “apology to all Muslims because the Prophet is a symbol of Islam and Muslims.”

“We are demonstrating to denounce and strongly disapprove” of Macron’s comments, Kadhemi told AFP at the protest.

Other protesters called for a boycott of French products, like those already underway in supermarkets in the Persian Gulf kingdoms of Qatar and Kuwait, and demanded in Jordan and Turkey.

In a provocative move that hurt the feelings of Muslims, Macron “has defended publication of caricatures offending Prophet Muhammad and said France would not give them up under the pretext that the country adheres to ‘secularism’ and ‘freedom of expression.’ The free speech has, however, been abused for repeated and deliberate insults to the Prophet, Islam and religions,” the political party said in a statement.

It added, “Such aggressive viewpoints reflect his (Macron’s) psychological complexes, his internal defeat and his tendency to insult dignitaries in the hopes that he would look great. These positions come within a deliberate approach aimed at undermining Islam and targeting its sanctities. Accordingly, they should not be tolerated.”

The Islamic Dawa Party then called on all Muslim institutions, states and nations to “express their outrage and condemnation, and voice their support for the Prophet.”

It also demanded an apology from the French leader, stating that his recent Islamophobic comments have hurt the feelings of nearly two billion Muslims across the globe, who make up more than a quarter of the world’s population and whose religion is currently the world’s second-largest after Christianity.

Separately, the Fatah (Conquest) Alliance has called for a boycott French goods in Iraq in protest at Macron’s anti-Islam stance.

“Muslim and Arab world besides friends of the French nation were astonished by Macron’s offensive statements against Islam and its honorable Prophet. We denounce Macron’s comments as we see them as a grave affront to humanitarian and cultural values,” it stated.

“Macron’s offensive remarks indicate his ignorance of Islam. He is living in a country, where Orientalism was born and flourished and a great deal of research has been conducted on the knowledge of Islam and its philosophical advantage over the Western civilization,” the statement added.

“The smallest response to this blatant insult of the Prophet (PBUH) is to boycott French products. The [Iraqi] government must summon the French ambassador [Bruno Aubert] and send a note of strong protest to the French government,” the Fatah Alliance pointed out.

Turkey: Macron after leadership in Europe

“President Macron’s recent anti-Islam rhetoric is yet another example of a desperate European politician vying for relevance,” Altun wrote in a series of posts published on his official Twitter page.

“His flailing attempt to assume leadership in Europe is driving his promotion of Islamophobia, xenophobia, and his attacks on our President [Recep Tayyip] Erdogan,” he added.

Altun stressed that Macron is discriminating against Muslims in France and in Europe for a political purpose.

“We need to call out such irresponsible figures whose statements and actions are not simply the effect but the cause of hostility against Islam. Politicians like Macron are savoring opportunities to condemn a whole religion in order to cover their failings at the home front,” the senior Turkish official pointed out.

Pakistan’s upper and lower houses of parliament also adopted resolutions on Monday, condemning France over a “systematic” Islamophobic campaign under the pretext of freedom of expression.

The lawmakers unanimously voted for two separate resolutions, which strongly condemned the “illegal” and “Islamophobic” publication of insulting caricatures of Prophet Muhammad in France.

The resolution, introduced in the National Assembly by Foreign Minister Shah Mahmood Qureshi, urged the Islamabad government to recall its ambassador from France in protest against the sacrilegious moves.

The resolution, introduced in the National Assembly by Foreign Minister Shah Mahmood Qureshi, urged the Islamabad government to recall its ambassador from France in protest against the sacrilegious moves.

Additionally, the Collective Against Islamophobia in France (CCIF) announced in a statement on Monday that it plans to expand its activities outside the European country amid concerns for its safety in the wake of Macron’s remarks.

“As an organization, we no longer feel we can conduct our work in a safe environment, as our lives are threatened and the government designates us as an enemy,” it said.

The French Muslim human rights group highlighted that it had been targeted by hate messages, death threats and insults over the past week after the French government announced it wanted to dissolve the organization.

“Using fake news from the far right, some political figures in the entourage of president Macron have even tried to pin last Friday’s attack on organizations who denounce Islamophobia, as if it was conceptually impossible to address both terrorism and contemporary forms of racism, including Islamophobia,” the statement read.

“For these reasons, whatever the outcome of the government’s attempt to dissolve CCIF, we have decided to extend our activities internationally, to ensure continuity of our operations and protect our teams,” the group pointed out.

“Insulting religious symbols and sanctities fuels the culture of abhorrence, violence, extremist and terrorism that the Kindom condemns in all its forms,” Safadi said.

He underlined that the affront to Prophet Muhammad and other divine prophets cannot be accepted under freedom of expression.

The top Jordanian diplomat said the European Court of Human Rights (ECHR) ruled on October 25, 2018 that insulting Islam’s Prophet Muhammad is not covered by freedom of expression.Oman Mufti: Muslims should boycott French firms

Meanwhile, the Grand Mufti of the Sultanate of Oman, Sheikh Ahmad bin Hamad al-Khalili, expressed his support for the boycott of French products in protest at the insult to Prophet Muhammad (PBUH).

He called on Muslims worldwide to withdraw their money from French businesses, and work towards the creation of an independent international economic system.

In a belated reaction, Saudi Arabia on Tuesday also condemned the cartoons and any attempts to link Islam with terrorism.

An unnamed foreign ministry official said in a statement that the Persian Gulf state condemned all acts of terrorism, in an apparent reference to the French teacher’s murder.

“Freedom of expression and culture should be a beacon of respect, tolerance and peace that rejects practices and acts which generate hatred, violence and extremism and are contrary to coexistence,” the statement carried by state media said.

Even though calls for a boycott of French supermarket chain Carrefour are trending on social media in Saudi Arabia, the corporation continues to operate in the kingdom and two main stores Reuters visited in the capital Riyadh on Monday seemed as busy as normal.

Featured image: A picture of French President Emmanuel Macron is burnt by Palestinians during a protest against the publications of a cartoon of Prophet Muhammad in France and Macron’s comments, near Hebron (al-Khalil) in the Israeli-occupied West Bank October 27, 2020. (Photo by Reuters)