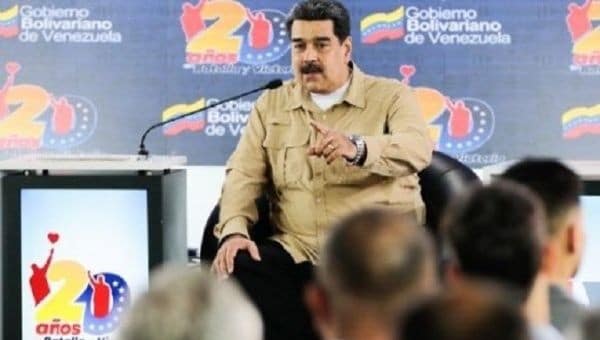 “Che, Fidel, Chavez, they are our heritage, they give us strength,” President Nicolas Maduro said.

Venezuela will not allow foreign soldiers to invade, President Nicolas Maduro said calling for dialogue with opposition forces during a televised speech Monday.

“Che, Fidel, Chavez, they are our heritage, they give us strength,” the Bolivarian head of state said, reminding the crowd of supporters of the country’s past struggle for independence dating back to the colonial era to present day.

Since the attempted coup on Jan. 23 lead by opposition lawmaker Juan Guaido, the United States has aligned its forces with the self-proclaimed “interim president,” declaring his unconstitutional claim legitimate, triggering similar calls from its allies around the world and in South America.

Maduro said, “When our Comandante Chavez passed away, I became president, but my first act was to hold elections. I wasn’t going to govern without elections…why has Sanchez Castejon governed for so long in Spain without convening elections?

Threats of militarized intervention have resurfaced as well as new rounds of suffocating sanctions against Venezuela, targeting the country’s oil companies in the United States. Although both the Lima Group and the European Union have rejected militarized force, they have recognized the Guaido’s claim and are calling for Maduro to abdicate in favor of a new election.

“The attacks against us from the so-called ‘Lima Group’ are also an attack on the whole left, on all progressives who they persecute in their countries,” President Maduro said, describing the organization’s behavior as “disgusting and laughable.”

Regarding the repeated requests for intervention made by the Venezuelan opposition, the president said it was foolish for his homeland to encourage war.

“Those who march with the US flag asking for military intervention in their own country have no idea what they’re asking for, they have no idea of the damage they will bring,” said Maduro.

“In Venezuela, a battle is being played out for the right of all countries to pursue their own paths… I want to ask the world for the highest level of solidarity to create a powerful movement against the threats of war from the US,” the Bolivarian president said.