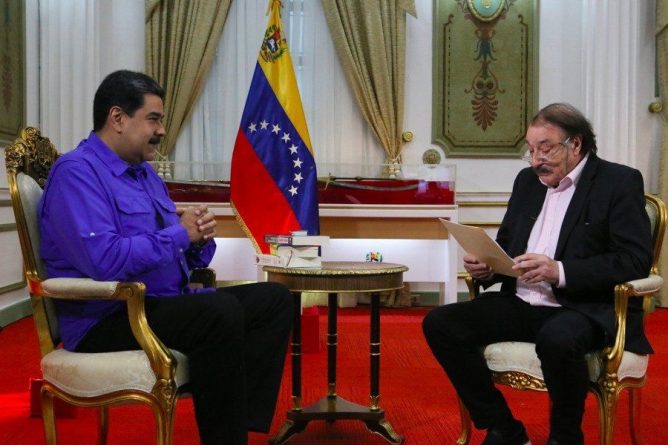 Venezuelan President Nicolás Maduro, during an interview with Spanish journalist, historian, writer and political analyst, Ignacio Ramonet, pointed out that the decline in oil production from the Venezuelan oil industry has been one of its biggest concerns. He is “sure that 2019 will be the year of recovery in oil production.” “We seek and defend an equilibrium price that favors producers and consumers. And we will continue to act in this way within the framework of the agreement of oil producer countries members of OPEC (Organization of Petroleum Exporting Countries) and non-members of OPEC, “the president said from the Miraflores Palace in Caracas.

“Venezuela is producing less oil than it should be, and that has been one of my biggest concerns. Regrettably, in the bosom of PDVSA (Petróleos de Venezuela Sociedad Anónima), true mafias were pullulating. The damn corruption that, like a cancer, has undermined our strength and prevented us from increasing oil production. We have faced them with impetus, with determination. ”

He argued that several “corrupt” managers and senior officials are at the disposal of justice, for betraying “our trust, their word of honor and their loyalty to become mere thieves.” Currently, these characters “are being processed.”

“I am sure that 2019 will be the year of recovery in oil production, with the help of the honest PDVSA and private companies that, through the formation of joint ventures and service contracts, are already producing and accelerating this effort. ”

On the other hand, President Maduro pointed out that the international sanctions applied by the United States (US) and its allies against the country, have caused multimillion-dollar losses during 2018. This, with the purpose of suffocating the Venezuelan economy and seizing the natural resources that the nation possesses, said the president.

“We have a bloody battle against international sanctions that have made Venezuela lose at least 20 billion dollars in 2018,” the Bolivarian leader said.

The situation with the international company Euroclear is an example of this, said the Venezuelan president. “This company kidnapped Venezuela in the (year) 2018, 1,400 million dollars that we had already committed to buy medicines, supplies, to buy food and no one responds,” he said.

Meanwhile, the president stressed that Venezuela has repeatedly denounced this persecution in the United Nations (UN) and the secretary of that body, as well as in several agencies, without getting specific answers.

Maduro said that in 2019 there will be positive surprises about the increase in production, all framed in the program of Economic Recovery, Growth and Prosperity. “I believe that with the Program of Economic Recovery, Growth and Prosperity in 2019 there will be great positive surprises, very positive, around the increase in production, around the creation of diverse wealth for the country, and around the takeoff of the Venezuelan economy with the control of inflation and the elements that have disturbed the lives of Venezuelans in recent years, “he said.

The president said that the main achievement of the Economic Recovery, Growth and Prosperity Program “is that we have the reins already, of what is a growth plan, of recovery”. IR: Good afternoon, President. Thanks for receiving us. In this interview we are going to address essentially three topics: politics, economics and international affairs.

Let’s start with politics: perhaps the main political event of the year 2018 was his re-election, in the elections of May 20, with more than six million votes obtained and more than 40% of difference with respect to the main opposition candidate Henri Falcón. How do you explain – in such a difficult context for the citizens, created by the economic war and the financial sanctions imposed by Washington – that voters have granted you, for the second time, such massive support?

Nicolás Maduro: In effect, the people of Venezuela granted the Bolivarian Revolution, to Chavismo -which is a real political and social force, that exists in the streets, in the neighborhoods, in the fields, in the cities and in the towns- and also granted, I must say humbly, to my candidacy, the greatest support – in percentage terms – that any candidate has ever obtained in a presidential election in Venezuela.

We were already noticing – after the victory of peace with the constituent election of July 2017 – a sustained recovery of our forces, a consolidation of revolutionary unity – we received the support of all the parties of the Great Patriotic Pole and of infinity of social movements-, and an organized growth of our United Socialist Party of Venezuela (PSUV), which is the political party with the largest number of affiliates in Latin America.

That good result is also explained, I dare to say so, by the maturity and wisdom shown by our people in the midst of the most brutal aggression we have suffered since our war of independence. Our people have grown, they have grown in conscience, in organized strength, in patriotism, in the face of psychological warfare and the illegal and illegitimate economic war perpetrated by the North American empire together with their satellite governments of this continent and Europe, to try to bend us. The result of this hostility has been the stubbornness shown by the citizens in their determination to remain free, independent and sovereign.

And another fundamental factor, determinant, Ramonet, is that the Bolivarian Revolution has attended, in the midst of difficulties and economic and financial harassment, the needs of Venezuelan society. Here it has not closed a single school, nor a university. On the contrary, the number of students in public education has increased. Here we continue to provide free health care to the entire population. We have protected, with great strength and determination, the salary and employment of all. And approximately every three weeks we deliver the staple food, the now famous “CLAP boxes”, to some six million homes in Venezuela; we deliver them directly to their homes.

On the walls of Caracas you can read graffiti on the walls, which perhaps summarize what I answer: “I vote for the one who increases my salary, not for the one who makes the products more expensive”. Perhaps that explains why the Bolivarian Revolution is today more robust, alive and amalgamated in a single constructive effort than ever.

IR: Within a few days, on January 10, 2019, your new six-year presidential term starts. Some governments that did not recognize the results of the presidential elections of May 20 threaten to ignore you as constitutional president of Venezuela. What do you answer?

Nicolás Maduro: Well, first of all, that Venezuela is a country that has forged, throughout history, its identity, its republican character, its independence. And that, Venezuela, is governed by a Constitution that is the most democratic that ever existed in our history. Approved by our people nineteen years ago in a referendum. And this Constitution has been respected impeccably in these nineteen years.

In 2018, we had two totally transparent electoral contests, governed by the country’s electoral institutions. I must remember that the Electoral Power, in Venezuela, is a public power, the fifth public power. And that power used all its logistics, its electronic systems of the highest level of transparency. Recognized by international personalities of undeniable prestige as [former President of the United States] Jimmy Carter who stated at the time that “the Venezuelan electoral system is the most transparent and neat that has been seen in the world; the most perfect”.

The presidential elections of May 20, 2018 were held under the control of national and international observers. And our people made a decision. Decisions about Venezuela are not made by foreign governments. We are not an intervened country, tutored by any empire. Neither for the empire of the North, nor for its satellites in Latin America and the Caribbean, nor for Europe. In Venezuela, the people govern and rule sovereignly. And the people made a very clear and very decisive decision: for the first time, we got 68% of the votes … You pointed it out: more than four million votes of difference with the main candidate of the opposition.

So: the people has decided. And we are going to fulfill the decision of the people. There is no possibility that any government say the minimum word, from abroad, to recognize or ignore the constitutional and democratic legitimacy of the government that I will preside from January 10, 2019 to January 10, 2025. I have the plan, the project, the experience, the strength. Count with that!