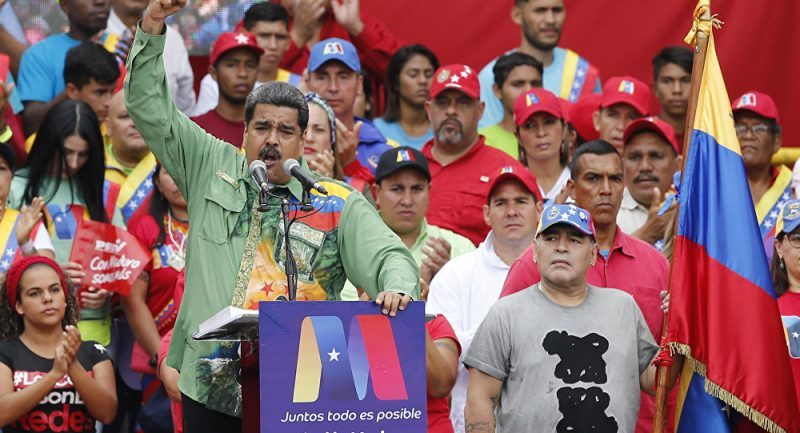 Venezuelan President Nicolas Maduro described the country’s withdrawal from the Organization of the American States (OAS) as a liberation from the “US ministry of colonies.”

On Saturday, the nation’s foreign minister, Jorge Arreaza, said that Venezuela was officially no longer a part of the OAS.

“We became free of the US ministry of colonies, a tool of interference as well as disrespect for democratic principles and international law. Our Bolivarian and independent Motherland says ‘Goodbye’ to the OAS,” Maduro wrote on his Twitter page on Saturday.

RELATED CONTENT: The Political Delirium of a Declining Empire

Maduro announced the decision to leave the bloc in 2017, supporting immediate withdrawal of the country from the OAS, although the procedure usually takes two years. The OAS does not recognize Maduro’s new presidential term that began on 10 January.

Venezuelan Foreign Minister Jorge Arreaza said on Saturday that Venezuela is officially no longer a part of the Organization of the American States.

“From today [Saturday], the Bolivarian Republic of Venezuela does not belong to the OAS, we have met all the deadlines and fulfilled the will of the Venezuelan people,” Arreaza said during a march of government supporters in Caracas.

Commenting on the recent US sanctions against him, Arreaza said that his only bank account was an account in a Venezuelan state bank, to which his salary was transferred.

On Friday, the US Treasury Department’s Office of Foreign Assets Control imposed sanctions on Arreaza and Venezuelan Judge Carol Padilla. In his speech at the United Nations earlier this week the top diplomat slammed the United States for its alleged efforts to dominate the United Nations and denounced the US call on other members of the organization to recognize the government of Venezuelan opposition leader Juan Guaido who has proclaimed himself the country’s interim president.

The United States has targeted Venezuelan officials and businesses with multiple sanctions in recent months amid its campaign to force Maduro from power.

Venezuela is currently facing a dire economic and political crisis with opposition leader Juan Guaido having proclaimed himself as the country’s interim president. The move was recognized by the United States and over 50 other nations, while Maduro described it as an attempt at a US-orchestrated coup.

China, Russia, Bolivia, Turkey and numerous other nations recognize Maduro as the legitimate president of Venezuela.

The OAS is a continental organisation founded in 1948 to ensure regional solidarity and cooperation among its member states.