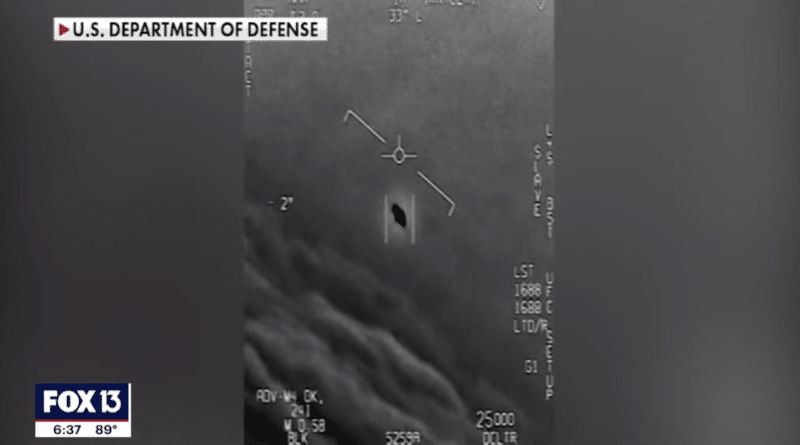 After the January 6 riot at the US Capitol Building, the mass media immediately seized the opportunity to call for more internet censorship to prevent the spread of crazy conspiracy theories. Now the mass media are saying the US military has been lying about UFOs for decades and hey, maybe space aliens are flying around above your house.

Half of the UFO articles coming out of the mass media these days are basically just stalwart propagandists for the western empire explaining to each other that it’s okay to talk about UFOs now and they should all feel perfectly fine and normal about that.

•  In a Washington Post article titled “Why aren’t we talking more about UFOs?“, the author complains that her Twitter feed (read: her journalist friends) doesn’t have enough people talking about this strange new phenomenon they’re all allowed to talk about now.
•  In an NPR article titled “How UFO Sightings Went From Conspiracy Theory To A Serious Government Inquiry“, NPR tells us how “UFOs went legit” in defiance of “stereotypes of UFO enthusiasts running around in tinfoil hats.”
•  In a Guardian article titled “‘From hearsay to hard evidence’: are UFOs about to go mainstream?“, readers are told that this is now a serious issue because military institutions are confirming it.
•  In a Spectator article titled “It’s getting harder to laugh off the idea of UFOs“, the author argues that it’s now the UFO people who are the calm, rational ones, and those disputing the narratives we’re being fed are the “embarrassingly over-emotional” kooks.
•  In a Sydney Morning Herald piece titled “Don’t laugh, but right now I’m paying attention to all the talk about UFOs“, the author waxes lyrical about how this issue provides an opportunity “to dream of infinite possibilities, and wonder who we might be if we weren’t alone.”

These unprincipled propagandists are falling all over themselves to dismantle taboos which they’ve been unquestioningly upholding and enforcing for decades, really for no other reason than because they were told to by the US military.

Here's another mainstream media article about the changing attitude towards UFOs – this one making an interesting point about the reversal of the usual skeptic/believer dynamic.

Can we take a minute to ingest how obnoxious that is? The “free press”, the journalistic institutions who are purportedly responsible for maintaining a well-informed public and holding the power to account, are now reporting something they used to scoff at and dismiss, because the US military told them it’s legitimate.

The US military. The single most dangerous part of the single most powerful government on earth, who the press is meant to be holding accountable with the light of truth. The part of the US government where intense skepticism is the most important. They’re not just failing to apply critical journalism, but are actively picking up the torch and running with a story as bizarre as the possibility that extraterrestrials are buzzing around the earth’s atmosphere.

The fact that the mass media are now talking about UFOs all the time because the US military told them it’s a legitimate story to cover says very little about UFOs, but it says a lot about the mass media.

These outlets are propaganda firms. Clearly. When The New York Timesfirst reportedthat US officials familiar with the government UFO report say that UFOs might be alien aircraft or could be secret Russian or Chinese technology, but say it’s definitelynot any kind of secret US technology, there was not a shred of incredulity from the mass media about the latter claim. News media institutions all took great pains to inform their audiences that UFOs could be a sign that the US is losing the arms race to Russia and China, and that it could totally be space aliens, but I never saw one news report reminding readers to take US government denials of possession of secret aerial technology with a very large grain of salt.

These propaganda institutions aren’t just selling the public one irresponsible story here, they’re selling them two. They’re not just uncritically reporting that UFOs are definitely real and probably threatening, they’re also tacitly selling the false idea that the US war machine does not have an extremely well-documented history of lying.

🤘🏼 How Harry Reid, a Terrorist Interrogator and the Singer From Blink-182 Took UFOs Mainstream – POLITICO https://t.co/2A6RKnPOqv

The more I learn about this new UFO narrative and its origins the more of a freaky psyop it looks like. It’s clearly been packaged for and marketed to mainstream Americans who don’t understand global power dynamics or the depravity of the US military/intelligence machine. There’s basically just a handful of people who are officially responsible for this weird new mainstream UFO plotline, and they’re all either military/intelligence insiders, sleazy warmongering politicians, or the singer from Blink-182.

I really mean that, by the way; Blink 182’s Tom DeLonge and his To The Stars Academy played a critical role in the unfolding of this story. Think about how easy that situation would be to manipulate. All you’d really need is to surround DeLonge with some spooks feeding him whatever information you want him to believe, allow some “leaks” to the press, and then you’ve got this vaguely organic-looking group seeding out information that you wanted to get out anyway so you can advance whatever agendas you’ve got planned.

And if you listen to DeLonge talk at length about the insane things he’s been told about aliens and UFOs by the military and intelligence insiders he’s surrounded himself with, it’s pretty clear he’s at the center of some kind of disinfo operation. The things he’s been told include things like that aliens are responsible for the world’s wars, that they feed off human conflict and negativity, that nuclear tests were actually the military targeting alien aircraft because that’s how you kill them, and that the US military has been acting heroically in the highest interest for the benefit of mankind against these malevolent entities.

How hard would it be to take a naive rock star who comes from a military family, who trusts the US war machine, and who desperately wants to believe in UFOs, and use him to insert a desired narrative into public consciousness? I reckon not too hard.

So proud of my brother, Shon. He just retired after 24 years in Naval Special Warfare. An… https://t.co/JwozqVf5bX

This is what the mass media are swallowing hook, line and sinker, with zero gag reflex, and regurgitating into the minds of their audiences.

And now you’ve got philosopher Sam Harris reporting that he’s been contacted by insiders allegedly privy to special knowledge about this thing who are telling him that “when this other shoe drops you’re going to be in the position of having to acknowledge that all the experts are on the same page, and there’s just this blanket declaration that we’re in the presence of alien technology, we don’t know what to make of it. So prepare your brain for that and figure out what you’re going to do.”

Pretty jarring stuff. Now, re-read it with the understanding that he’s talking about some sort of military or intelligence operative who is openly prepping a high-profile influencer. Looks a bit different in that light, no?

Like DeLonge, Harris has also demonstrated a blindly trusting mind when it comes to the US war machine, which is kind of funny coming from an outspoken atheist who prides himself in his logic and evidence-based worldview. Harris has placed his trust in everything from Russia hysteria to the “war on terror” to the invasion of Afghanistan, so he makes another ideal mark for uncritically seeding disinformation out to the public.

@FreeSpeechOrDie I supported the initial invasion of Afghanistan. And I support ongoing actions against actual jihadists.

You’d have to be absolutely out of your mind to trust anything we’re being told about any of this, and this is coming from someone who has actually seen UFOs. On two separate occasions I’ve seen lights in the night sky behaving in ways known technologies can’t explain, and I’ve had plenty of other experiences most people would consider extraordinary as well. And I still place exactly zero trust in this new UFO plotline. And neither should you.

Today I received my first online comment from someone calling me a “conspiracy theorist” for expressing skepticism about UFOs. This is the new reality, folks. Buckle up.