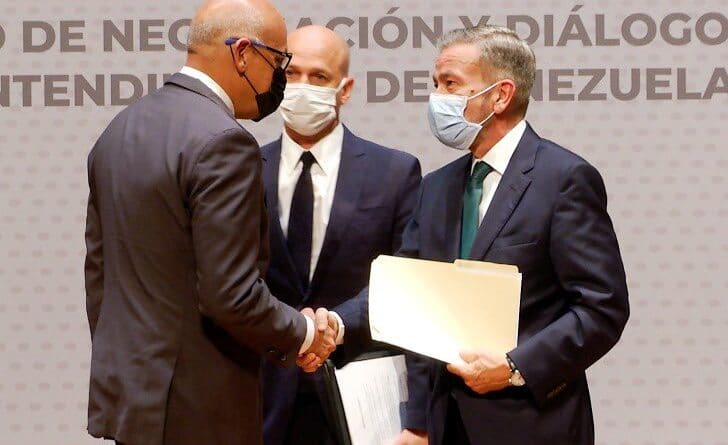 Caracas, August 15, 2021 (special for OrinocoTribune.com)—We want our readers to see firsthand the transcript and Orinoco Tribune’s unofficial translation of the memorandum signed last Friday, August 13, between the Venezuelan government and the opposition labeled as the “Unitary Platform of Venezuela”—a label considered by many analysts as a euphemism for something that, in reality, is a very fragmented extreme wing of the Venezuelan opposition. The so-called Unitary Platform rejected the inclusion of the other faction of the opposition represented in the Venezuelan National Assembly in the dialogue process, or even the inclusion of the most fascist and pro US-invasion sectors, represented by Maria Corina Machado among others.

An international affairs analyst consulted by Orinoco Tribune told us that “many outside Venezuela believe that President Maduro sits at the negotiation table in a position of weakness when, in reality, what is happening is the opposite. Maduro’s administration sits at the negotiation table after more than two years of defeating imperialist aggression, both internally and externally, while the extreme-right opposition weakens every day. The US and Europe have given the green light for the opposition to sit at the negotiating table again. This is due to these resounding defeats at all levels, and following multiple calls by President Maduro for talks.”

“Chavismo seeks to find a path for lifting sanctions and the blockade as well as to recuperate assets like CITGO (in the US) or Monómeros (in Colombia) along with financial resources and the gold illegally seized by the Bank of England (BoE),” added the analyst. “The opposition is just following the instructions of its masters while the small support they still had locally is dwindling, because its base sees them as capitulating by going to the negotiation table with Maduro’s administration.”

The memorandum’s unofficial translation is below:

Memorandum of understanding
The parties designated for the purposes of this process, such as the Government of the Bolivarian Republic of Venezuela and the Unitary Platform of Venezuela,

• Under the protection of the Constitution of the Bolivarian Republic of Venezuela,

• Convinced of the need to put the welfare of the Venezuelan people at the center of attention,

• Putting an emphasis on the superior values of the legal system of the Venezuelan State and its actions, which are those of life, freedom, justice, equality, solidarity, democracy, social responsibility and, in general, the preeminence of human rights, ethics, and political pluralism,

• Committed to strengthening an inclusive democracy and a culture of tolerance and political coexistence,

• Convinced of the importance of promoting a culture of respect for human rights and of investigating and punishing their violation,

• Willing to agree on the necessary conditions for the electoral processes enshrined in the Constitution to be carried out, with all the guarantees,

• Understanding the need for the sanctions against the Venezuelan State to be lifted, establishing independence, freedom, sovereignty, immunity, territorial integrity and national self-determination as inalienable rights of the nation,

• Rejecting any form of political violence against Venezuela, its State, and its institutions,

• Committed to the stabilization and defense of national, productive, diversified and cooperative autonomy,

• Welcoming the humanitarian initiatives taken, particularly by the National Vaccination Board and the World Food Program,

• Recognizing the need to build a vision of a joint future for all Venezuelans, and

• Inviting members of the international community to join us in these endeavors.

We have agreed to carry out a comprehensive and incremental dialogue and negotiation process, based on an agenda, format, and guidelines agreed upon by the Government of the Bolivarian Republic of Venezuela and the Unitary Platform of Venezuela, prior to the beginning of the conversations in Mexico City, capital of the United Mexican States, whose agenda is as follows:

1. Political rights for all.

2. Electoral guarantees for all. Election schedule for observable elections.

3. Lifting of sanctions. Restoration of rights to assets.

4. Respect for the Constitutional Rule of Law.

6. Protection of the national economy and social protection measures for the Venezuelan people.

7. Guarantees of implementation, monitoring, and verification of what has been agreed.

The following general terms have also been agreed to:

1. Objective of a comprehensive negotiation
The objective is to reach an agreement, through intense, comprehensive, incremental, and peaceful negotiation, to establish clear rules of political and social coexistence with absolute respect for the national Constitution.

2. Method
The negotiation will take place under the principle that nothing is agreed until everything is agreed. However, the parties may enter into partial agreements if they consider that the issues on which they relate have been sufficiently discussed and if their implementation is urgent, necessary, or at least verifiable before the end of the negotiation. The early partial agreements will be included in the final agreement and will be irreversible from their issuance, without prejudice to the possibility of adjusting them to the circumstances or improving them, taking into account, among others, the principle of progressivity.

3. Representation
Each party will designate its delegation of nine (9) members, and will endeavor to include women in the delegations.

4. Participation
Consultation mechanisms with other political and social actors will be established.

Signed in Mexico City on August 13, 2021, by Jorge Jesús Rodríguez Gómez, the Government of the Bolivarian Republic of Venezuela; Gerardo Blyde Pérez, from the Unitary Platform of Venezuela; and Dag Nylander, the Kingdom of Norway.