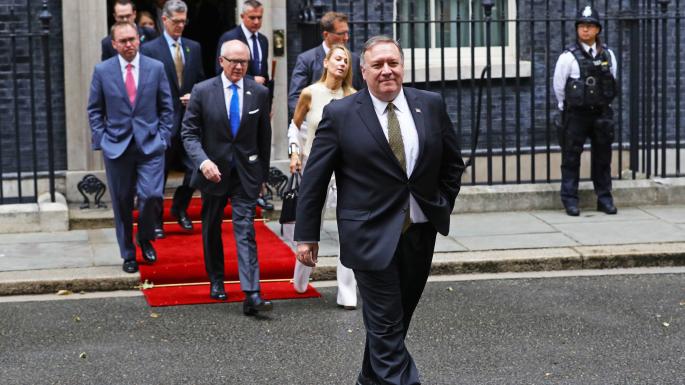 US Secretary for State Mike Pompeo has come under fire after a recording emerged of him saying he’d intervene to stop Labour Party leader Jeremy Corbyn becoming Prime Minister. In the recording first reported by the Washington Post, Pompeo suggests he won’t wait for Corbyn to be elected, rather he’ll attempt to stop it from being possible.

The off the record meeting was from when The Secretary for State met Jewish leaders to discuss Donald Trump’s proposed Peace Deal between Palestine and Israel.

Apart from appearing un-optimistic about the Peace Deal, he found time to comment on UK politics. When asked by an attendee;

if Corbyn “is elected, would you be willing to work with us to take on actions if life becomes very difficult for Jews in the U.K.?”

Pompeo gives a very clear response. Considering the allegations of Russian interference in the 2016 Presidential elections, the irony here is inescapable. The top US diplomat told those in attendance;

“It could be that Mr. Corbyn manages to run the gantlet and get elected. It’s possible. You should know, we won’t wait for him to do those things to begin to push back. We will do our level best,

“It’s too risky and too important and too hard once it’s already happened.”

This response received a voracious round of applause from those in the meeting.

These remarks raise serious questions about US interference in UK Politics. It has been alleged by many, that Russia played a part in the United Kingdom’s decision to leave the European Union (EU). Now a top US official wants to influence a General Election or perhaps have Corbyn removed as Labour Party leader.

For the Jeremy Corbyn to become Prime Minister, he would need his party to gain the most seats in Parliament and be able to hold a majority following a General Election.

The next election in the UK isn’t due until 2022. However, an early election can be called if the government of the time loses a “vote of no confidence” or, MPs vote by two-thirds to dissolve parliament early.

Given that the Conservative Party are electing a new leader who will become the next Prime Minister, it is possible that either of these scenarios could occur.

UK politics is however chaotic at the moment. Nigel Farage’s newly formed Brexit Party did well in the recent European Elections. The two main parties, Labour and the Conservatives are also both under fire for the Brexit stances. Given all that is going on, no party is guaranteed a majority raising the possibility of a Coalition Government.

Interference Irony
Donald Trump’s entire presidency has been overshadowed by allegations that Russia colluded with his campaign to help him win in 2016. The Mueller Report did find that there was no evidence of Russian collusion, with some caveats.

A Labour spokesmen hit out at the revelation by saying;

“President Trump and his officials’ attempts to decide who will be Britain’s next prime minister are an entirely unacceptable interference in the UK’s democracy.”

The remarks about President Trump relate to comments he made during his State Visit to the United Kingdom last week. Mr Trump suggested that Nigel Farage should be involved in Brexit negotiations and, he endorsed Boris Johnson to become the next Prime Minister following Theresa May’s resignation telling the Sun Newspaper;

“I think Boris would do a very good job. I think he would be excellent,”

Mainstream Jewish organisations in the UK have be vocal in their opposition of Jeremy Corbyn. Since his election as Labour Leader in 2015, he has been dogged by attacks in the media accusing him and Labour of antisemitism.

Despite these attacks, his popularity has grown and Labour is now the largest political party by membership in Western Europe. In 2017 against all predictions Corbyn led Labour to get an increased vote share and also lost the Conservatives their majority in Parliament. This is what has led to deadlock in parliament as the Conservatives don’t have a majority to pass legislation.

MPs in his own party have called Corbyn himself an antisemite. Dame Margaret Hodge famously screamed it in his face in the corridors of the House of Commons in London. She was initially placed under investigation for this but it was later dropped as Mr Corbyn didn’t want to take action.

Under his leadership he has changed the process for dealing with claims of antisemitism. A body independent of the party leadership look into any claims and take action were appropriate. One of the main issues that seems to pass by most media commentators, is the fact that Labour can only take action against it’s members. Many of the complaints they receive turn out to involve non-party members.

Corbyn has spoken out on antisemitism and all forms of racism by stating they have no place in society. This is not enough for most of his critics. Only his removal for the top job will satisfy those unhappy with his leadership.

Many on the left of UK politics believe that the hostility towards Jeremy Corbyn stems from his support of Palestine. He has been clear that should he be elected, the UK will officially recognise Palestine as a country.

Mr Corbyn has frequently spoken out against the Israeli government’s treatment of Palestinians since he became a Member of Parliament in 1983. He has also defended Jewish groups throughout his time in parliament too.

There is a strong Lobby for Israel in UK politics. This is no secret and has played against Corbyn on many occasions. However, now the US Israeli lobby is getting involved, this ramps things up significantly. The United States has always been much closer to Israel and any threat to the status quo will be seen and treated as a threat.

Mike Pompeo has made this clear in his comments.

What Next for UK Politics

Over the next few months the UK political scene is going to change significantly. A new Prime Minister will take office seeing the Cabinet change in composition.

The UK is due to leave the European Union at the end of October, with or without a deal. This could see the economy take a hit bringing more uncertainty.

A General Election is a real possibility what with Parliament being in deadlock over Brexit. Any interference from US Politicians is not taken well in the UK. When then US President Barrack Obama commented that the UK would be at “the back of the queue” should they vote to leave the EU, he faced criticism from all sides.

Should Pompeo or any other politician attempt to sway people of influence the Labour Party I would expect a similar response. Whilst no fans of each other, UK political parties don’t like outside interference.

Pompeo’s remarks also may come back to haunt him should Jeremy Corbyn become Prime Minister. The US and UK share a lot on defence and intelligence so a strained relationship from the start may put pressure on this.

With President Trump’s long awaited Peace Deal for Israel and Palestine due to be announced soon, the US don’t want a spanner being thrown in the works by Jeremy Corbyn.

With the Trump administration, anything is possible.