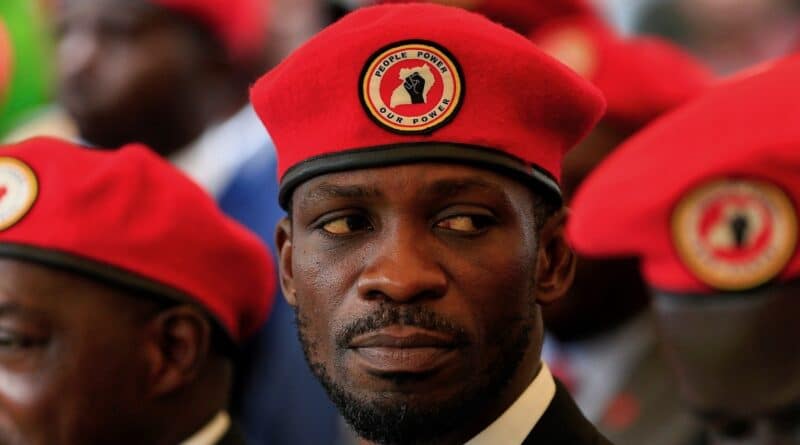 Bobi Wine’s flirtation with US Venezuelan puppet Juan Guaido indicates that the Ugandan is also auditioning for the imperial puppet job.

“A return to the oppressive conditions for the people will be inevitable if a dictator is removed but not the West’s ultimate control.”

On March 3, 2021, Ugandan pop star turned politician Robert Kyagulanyi (a.k.a. Bobi Wine) tweeted a picture of a Zoom call with himself and Juan Guaido, the US-backed Venezuelan opposition figure. “Very pleased to speak with President @jguaido of Venezuela this evening,” Wine tweeted, “We discussed the way forward for both countries, and the need to build synergies for the defense of democratic principles and human rights across the globe.” The responses were swift. Shocked critics from Uganda and throughout the world denounced Wine’s tweet. Within a day, Wine had deleted the tweet.

We should not be shocked. Instead, Wine’s apparent alignment with the U.S. State Department should remind us of a number of critical lessons concerning the struggle against U.S. and European imperialism. One key lesson is that our energies should always be focused on supporting radical movements, and not individuals or high-profile personalities. The second lesson is that even as we aim to support movements on the ground, we should also be aware of the new imperialist methods over the last few decades that have worked to co-opt, redirect, and deradicalize grassroots movements in the Global South.

“Our energies should always be focused on supporting radical movements, and not individuals or high-profile personalities.”

There is of course a long, documented record of these imperialist machinations. The U.S. Central Intelligence Agency (CIA) has always been involved in secretly establishing and funding networks and operations aimed at exerting political influence over civil societies throughout the world. As CIA whistleblower Philip Agee demonstrated, these vast operations targeted political parties, trade unions, youth and student groups, intellectual and professional communities, and public information media, among others. They worked to “divide, weaken and destroy corresponding enemy organizations on the left, and indeed to impose regime change by toppling unwanted governments.”

Imperialism today wields both hard and soft power. Hard power comes in the form of militarism and sanctions while soft power is like a trojan horse  that comes in the form of aid, “humanitarian” and “democracy” programs, conducted through agencies like the National Endowment for Democracy  (NED), the National Democratic Institute  (NDI), the International Republican Institute  (IRI) and several others. The NDI, NED, IRI, and Freedom House , currently conduct their operations openly, operations that the CIA used to conduct covertly.

“Imperialists have worked to co-opt, redirect, and deradicalize grassroots movements in the Global South.”

Imperialist machinations seem to be many steps ahead of our movements for liberation. And judging by the degree of surprise and disappointment in the “mistweet” by Bobi Wine, our movement is not yet a match for the shrewd counterinsurgency of white neoliberal power and its propensity to play both ends against the middle to preserve its dominance.

The question to ask is why Wine, at this moment, felt it necessary to express public support for imperialist flunky Guaido instead of, say, for any number of people’s movements as occurring in places such as Haiti or Nigeria.

Bobi Wine’s tweet was not simply an isolated incident. Just weeks before, on January 13th, an article bylined by Wine  was featured in the prominent establishment friendly magazine Foreign Affairs, a publication of the Council on Foreign Relations. The article, which ran during the week of Uganda’s contested January elections, lucidly details Wine’s persecution by the Museveni government while also pointing to the ways the West, led by the US, has supported Museveni over the years. The article also clearly gives the impression that Wine, though a persecuted figure, is unafraid even to tell the truth about US policy in Uganda. Wine concluded the article by heaping praise on the House Foreign Affairs Committee for calling on the Donald Trump administration to impose sanctions against individual members of Uganda’s government security forces as well as the Senate Committee on Foreign Relations for condemning his arrest in December 2020 and for demanding a free and fair election.

“Our movement is not yet a match for the shrewd counterinsurgency of white neoliberal power.”

But what is also telling is Wine’s association with some key U.S. institutions. On January 30, 2021, the U.S. ambassador for Uganda, Natalie E. Brown, released an official statement  affirming that she held an introductory meeting with Bobi Wine in his capacity as leader of the opposition party, the National Unity Platform (NUP). In October 2020, Wine was the special musical guest  at the virtual Annual Award Ceremony of the International Republican Institute (IRI), where former Secretary of State Michael Pompeo received the John S. McCain Freedom Award. U.S. Senators Mitt Romney and Lindsay Graham also attended the event. Wine was tapped , in 2011, by the National Democratic Institute (NDI), to produce a song on election violence as an appeal to Ugandan Youth. NDI worked with Wine to have the song, “A Serious Matter” played on major TV and radio stations across the country.

Given Wine’s growing popularity among U.S. government and foreign policy circles, it would not be too far fetched to assume that support of Museveni may be waning and, given that Ugandan youth are restless for change, the imperialists may looking for a suitable replacement.

“Wine was tapped, in 2011, by the National Democratic Institute (NDI), to produce a song on election violence as an appeal to Ugandan Youth.”

The goals of African people must be more advanced than simply replacing a dictator. Imperialism is a global system that requires enforcement of certain conditions everywhere. This is precisely why autocratic leaders are supported by imperialism. These governments are the neocolonial political cover for the West’s control of the land, labor and markets of the colonized. A return to the oppressive conditions for the people will be inevitable if a dictator is removed but not the West’s ultimate control. We should be clear: if Wine or anyone else comes to power under the dictates of US imperialism, their political and economic policies will always be circumscribed, and set against the welfare of the majority.

This is why we, African people everywhere, must develop the political sophistication to support radical, socialist movements rather than individuals or high profile personalities. African solidarity with people on the ground in Uganda or anywhere cannot be superficial and/or unconditional. It must be based on unambiguous principles of anti-imperialism, anti-capitalism, and self-determination.

Netfa Freeman is an organizer in Pan-African Community Action (PACA) and on the Coordinating Committee of the Black Alliance for Peace. And is also co-host/producer of the WPFW radio show and podcast Voices With Vision.

Jemima Pierre, a member of Black Alliance for Peace, is also a professor of Black Studies and Anthropology at the University of California, Los Angeles.