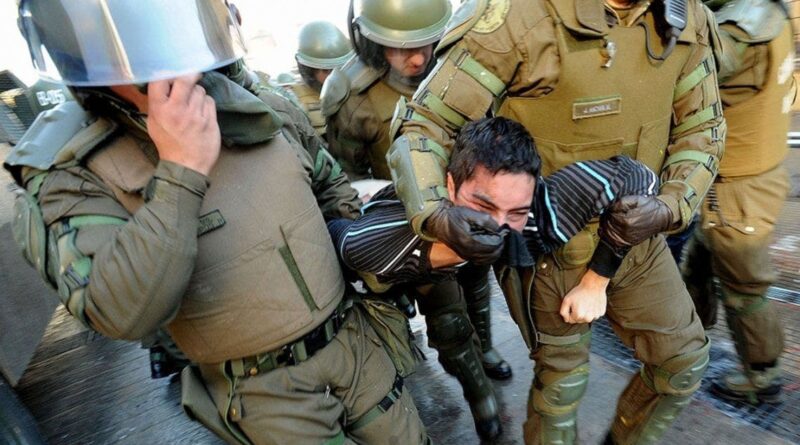 This Friday, March 12, at least 62 people were arrested at an anti-government protest in the Chilean capital, Santiago, in the midst of the removal of the statue of General Manuel Baquedano from the square that bears his name. The Plaza Baquedano in Santiago was renamed Plaza Dignidad by protesters eighteen months ago.

The Friday demonstrations were marked by intense clashes between Carabineros (Chilean Police) and the protesters, after a large contingent of uniformed police arrived and took control of the Plaza Baquedano sector, from where the monument of the general was removed.

These demonstrations, which take place every Friday in the renamed Plaza Dignidad, resulted in disorders and clashes between the protesters and the police, which spread to the nearby streets and surrounding areas such as the Lastarria neighborhood, Bellas Artes and the Forestal Park.

According to the police report of the day, 62 persons were detained for causing disorder in the public highway and 13 police officers were injured in the clashes. However, no civilian injuries were reported by the police, despite images of heavy police repression circulating in news portals and social media.

RELATED CONTENT: ‘The Audacity of Being a US Servant’ or What Bachelet Does Not See in Colombia, Brazil and Chile but Sees in Venezuela (Alicia Castro)

This week the protesters commemorated a year and a half of the start of the protests in September 2019. During this new round of demonstrations, they have decried that issues essential for Chileans have not changed, President Piñera has not resigned, political prisoners have not been released, there has been no justice for those killed or maimed by state repression nor any compensation for those who died in the COVID-19 pandemic,.

A report released last Friday, March 12, highlighted a 46% acquittance rate of policemen accused of deliberately causing blindness to more than 300 Chileans in a state practice of systematic human rights violation, a fact that has been barely covered by mainstream media or international human rights NGOs or agencies.

On April 11, Chileans will go to polls to elect assembly members for the Constituent Convention which will draft a new constitution to put an end to the Carta Magna inherited from the Pinochet era. The drafting of a new constitution has been one of the main demands of Chilean citizens over the course of the protests that began in late 2019.