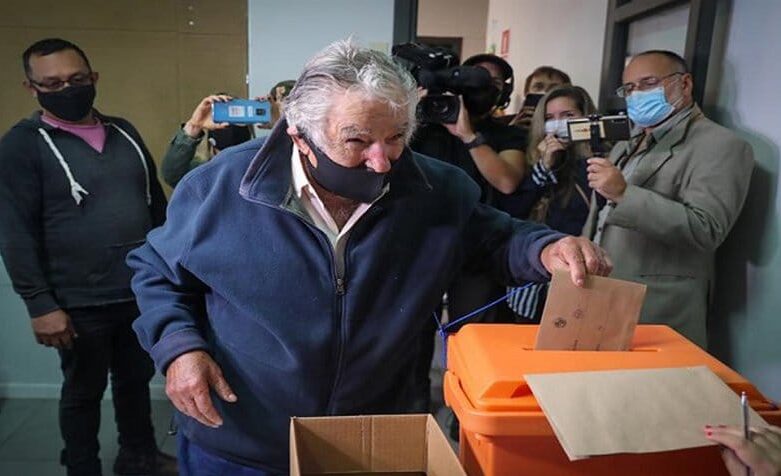 March 29, 2022 (OrinocoTribune.com)—With 97.37% of the ballots from Uruguay’s March 27 referendum counted, the “No” option has emergenced victorious. Uruguayans voted not to repeal the Law of Urgent Consideration (LUC). If the “Yes” option had suceeded, 135 articles of the LUC would have been struck down.

The referendum was seen as a plebiscite on the leadership of Luis Lacalle Pou, who took over the presidency after 15 year of leftists in power. The LUC was promoted as the flagship of Lacalle Pou’s campaign, a package of laws that was enacted shortly after his mandate began in March, 2020, primarily to fight crime in the country. Thus, a triumph by the “Yes” option would have been interpreted as a severe blow to his popularity. It is not clear if the results indicate public satisfaction with the omnibus law, as the margin of victory will not exceed three percentage points. Lacalle Pou emerged victorious in the 2019 election by only 1.5 percentage points.

The current count ensures irreversible victory for the “No” option, receiving 51.17% of the votes counted thus far.

RELATED CONTENT: Workers Strike in Uruguay Against Hunger and Inequality

The No option has won the referendum, therefore LUC's articles will not be repealed.#Uruguay #ReferendumLUC pic.twitter.com/drXG4FlTmv

The movement to repeal the LUC was led by the leftist opposition parties, including the Broad Front party that had held the presidency from 2000 to 2015, joined by labour unions, activists, and social movements, who argued that the omnibus law granted far-reaching powers to national security agencies and police, violating the rights to privacy of civilians, and limiting the right to strike by workers. Faced with rising crime rates which saw the country’s homicide rate increase 45% in 2018 alone, the LUC increases prison terms, grants greater powers to law enforcement, and facilitates the collection of private information on citizens without a court order. Other laws in the package enact limits to public spending, and curb the powers of government. As a result, various sectors of the population viewed the LUC as a carte blanche for the ruling class and campaigned vigorously for its repeal. 25% of Uruguayans, over 670,000 voters, signed the declaration required to trigger the referendum.

RELATED CONTENT: Mexican President Responds to US Military: ‘We are not Anyone’s Colony!’

President Lacalle Pou’s approval rating stands at about 52% according to recent polls, a figure that seems to have been largely confirmed by the results of the referendum, seen as a litmus test for the government’s performance thus far.

Analysts and political actors anticipated that if the LUC was defeated and repealed, Lacalle’s administration would have resorted to more forceful ways to impose the legal measures, which could have caused a situation of public unrest.

“There is no constitutional or legal impediment for the government, with the majorities that supported this law, to vote down similar laws, but there is a public commitment not to go down that path,” said Senator Silvia Nane, of the leftist Broad Front, the leading opposition party and the leading party in Uruguay’s General Assembly.

By Steve Lalla for Orinoco Tribune