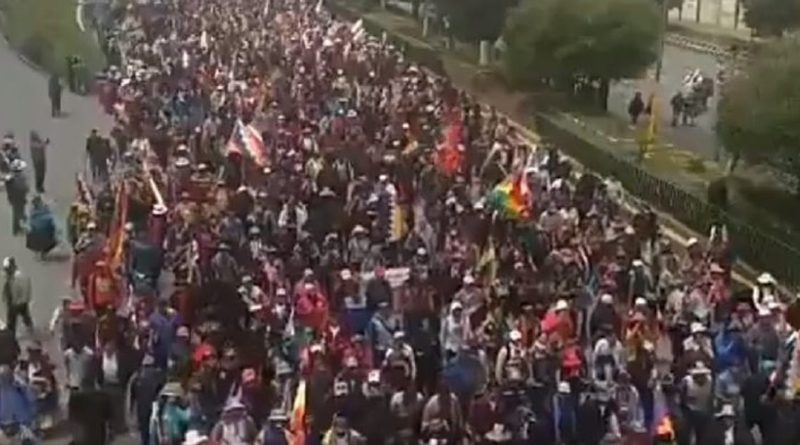 The blatant lies and hypocrisy of the US have been exposed with the publication of a new study from the Massachusetts Institute of Technology (MIT). This shows there was no fraud in Bolivia’s presidential election last October.
By Fiona Edwards – March 3, 2020

Coup 2019 was the real fraud
The US researchers at MIT have demolished the false claims that the US administration put forward to justify its support for the violent military coup against Bolivia’s socialist president Evo Morales.

The truth is that Morales is the legitimate elected president of Bolivia. He won the election in October 2019 by a large margin in a free and fair contest. Following the publication of this new study, the president of Argentina Alberto Fernández has once again defended Evo Morales, stating that the Bolivian leader “won last year’s election by more than 10 points”.

The real fraud has actually been committed by the Donald Trump administration. The notion that the US intervenes in countries around the world to promote ‘democracy’, ‘human rights’, or ‘freedom’ has once again been exposed as a total sham. In Bolivia, democracy has been overturned with the backing and material support of the US government, because the people elected the ‘wrong’ president.

Specialists speak out
The MIT study was commissioned by the Center for Economic and Policy Research (CEPR) and carried out by US researchers John Curiel and Jack R Williams who specialise in election integrity. Their work challenges the claims made by the influential Washington-based Organization of American States (OAS) of “serious irregularities” in Bolivia’s election. In a statement released during Bolivia’s counting process in October 2019, the OAS expressed “concern” at the “hard-to-explain change in the trend of the preliminary results after the closing of the polls”.

Our results were straightforward. There does not seem to be a statistically significant difference in the margin before and after the halt of the preliminary vote. Instead, it is highly likely that Morales surpassed the 10-percentage-point margin in the first round. …

There is not any statistical evidence of fraud that we can find – the trends in the preliminary count, the lack of any big jump in support for Morales after the halt, and the size of Morales’ margin all appear legitimate. All in all, the OAS’ statistical analysis and conclusions would appear deeply flawed.

The OAS is an organisation that operates as a tool of US foreign policy which has played a big role in justifying the coup in Bolivia. Its baseless accusations of electoral fraud were widely and uncritically reported in the overwhelming majority of the mainstream Western media. The impact of this was to undermine Bolivia’s legitimate democratic process.

The CEPR’s Mark Weisbrot is now calling for an investigation into the behaviour of the OAS:

Yes and there needs to be an investigation of the OAS to find out who was responsible for promoting this so obviously false narrative for 4 months, when the Trump administration and OAS used it to support a military coup and violent political repression https://t.co/Y92yivTskC

The US wants to dominate Bolivia
The US administration’s foreign policy is guided by the long-held doctrine that Latin America is the US’s ‘backyard’ and the entire region must be subordinated politically and economically to the US.

The real crime of Morales and his Movement Towards Socialism (MAS) was to reject US domination and pursue a path of independence, development, and social inclusion.

The success of Morales’s government was undeniable. Over almost 14 years, poverty was dramatically slashed, with the proportion of the population subsisting on less than $5.50 per day cut from 48.1% to 24.7%. Strategic sectors of the economy – including the country’s vast amounts of natural gas – were nationalised, and huge state investment was launched to develop the country. This economic model succeeded in improving living standards for more than a decade with average growth of 3.2% per capita between 2006 and 2018.

Morales was preparing Bolivia for the future as a trail-blazer in the global green revolution too. The country has one of the largest known reserves of lithium in the world. This mineral is an essential component for the production of electric batteries. Rather than just export this raw material unprocessed, Bolivia was investing in building state-owned factories to produce its own batteries for electric cars.

Apparently, this was totally intolerable to the US – which along with its local allies is trying to reverse the economic development of Bolivia and impose a neoliberal assault on the country. Luis Arce, the former economy minister in Bolivia under Morales and this year’s MAS presidential candidate, has warned that the US-backed dictatorship in Bolivia is already preparing to privatise the country’s lithium for the benefit of transnational corporations.

Bolivia’s new elections will be organised under conditions of political persecution
Following the US-backed coup on 10 November 2019, Bolivia is now governed by an ultra-right-wing, racist dictator – Jeanine Añez – whose party‘s electoral alliance secured only 4% in October’s elections.

New elections have been scheduled for 3 May 2020. They are being organised by electoral authorities chosen by the Bolivian dictatorship; so the conditions for free and fair elections are severely compromised. The US and Bolivia’s right wing are hoping to use these elections to claim some democratic credentials for governing the country. The problem that they face, however, is that – despite intense political intimidation, violence, and persecution – the enduring popularity of Morales and his MAS party continues. Luis Arce, for example, apparently leads the polls, with one of the latest putting him at around 32%. The right wing, meanwhile, is divided, with three high-profile candidates putting themselves forward. The centre-right Carlos Mesa is on 23%, Añez is on 21%, and Fernando Camacho – one of the instigators of the coup – is on 15%.

For MAS to be leading the polls in an atmosphere of intense political persecution, where opponents of the coup are criminalised and accused of sedition, terrorism, and corruption is a significant achievement. It reflects the fact that the left in Bolivia has deep social roots, mass support, and a rich history of struggle. Arce is himself under “investigation” and could be arbitrarily banned from standing in the election by the illegitimate Bolivian regime at any time. Morales, meanwhile, put himself forward to run for the senate but has already been disqualified by the supreme electoral tribunal.

Bolivians keep fighting back
The false accusation of electoral fraud served as a pretext for the execution of a highly sophisticated, meticulously planned, and well-resourced coup in Bolivia. The coup represents an important victory for US foreign policy in Latin America and a blow to all progressive forces in the region. The US has a history of using deception to influence public opinion in order to ‘soften it up’ ahead of US interventions. A notorious example of this approach was the US and UK invasion of Iraq in 2003, where the lie that Saddam Hussein had weapons of mass destruction was used as a pretext for a bloody conflict that would reportedly lead to over a million deaths.

The people of Bolivia are fighting on for their independence and self-determination. They need international solidarity, and for the truth of the despicable role that the US administration has played in overturning their democratic elections to be widely exposed.