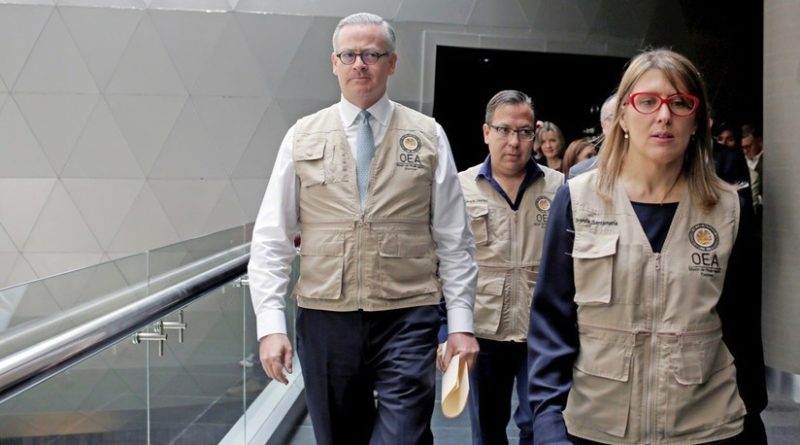 Washington, DC — Nearly eight months after incumbent Bolivian president Evo Morales was ousted in a coup d’etat amid allegations of electoral fraud, The New York Times reports that the Organization of American States’ (OAS) claims of fraud in the November 2019 general elections “relied on incorrect data and inappropriate statistical techniques.”

The Times article focuses on a new report from Nicolás Idrobo, Dorothy Kronick, and Francisco Rodríguez. The report, which uses detailed electoral data previously unavailable to researchers outside of the OAS, refutes OAS claims that fraud altered the election results. For months, the OAS has resisted calls for it to release its data and methodology. The authors show that they were able to predict the final outcome of the election within three one-hundredths of a percentage point, using data from prior elections and votes counted before an election night interruption of the vote.

“For those paying close attention to the 2019 election, there was never any doubt that the OAS’ claims of fraud were bogus,” said Center for Economic and Policy Research (CEPR) Research Associate Jake Johnston, coauthor of an 82-page report on the Bolivian election and the OAS audit of that election. “Just days after the election, a high-level official inside the OAS privately acknowledged to me that there had been no ‘inexplicable’ change in the trend, yet the organization continued to repeat its false assertions for many months with little to no pushback or accountability.”

CEPR analysts, using publicly accessible electoral data, came to similar conclusions regarding the false nature of the OAS’s claims in reports published in November 2019 and March 2020. On October 21, 2019, just one day after Bolivia’s election, the OAS denounced — without providing any evidence — a “drastic” and “inexplicable” change in the trend of the vote count following an interruption of the transmission of the election results. At the time, CEPR was quick to note that the data simply did not back up the OAS claims. Nevertheless, on November 10 — the day the OAS released an audit of the election reiterating its claims of an inexplicable change in the trend — the Bolivian military called on Morales to resign, and the president sought asylum in Mexico. An unelected government remains in power today with the strong support of the country’s military. The military’s repression of anti-coup protests resulted in dozens of deaths and scores of arrests.

Comparing the last votes to be counted with the first 95 percent, the OAS had alleged a dramatic break in trend, favoring Morales. The new paper finds that this allegation resulted from a “coding error” on the part of Irfan Nooruddin, a Georgetown University professor whom the OAS contracted to conduct the statistical analysis. The paper’s authors found they could only replicate the OAS’ findings if they excluded a certain subset of voter tally sheets; if those sheets are included, the authors found zero evidence of any “discontinuity” in the election returns. “In this case, there is neither a jump nor an uptick in the trend of MAS’s vote share in the final 5% of the count,” the authors conclude.

“The OAS bears responsibility for the significant deterioration of the human rights situation in Bolivia since Morales’s ouster,” CEPR Co-Director Mark Weisbrot said. He noted that this was not the first time the OAS had played a damaging role in an electoral crisis, citing the 2010 elections in Haiti as an example. “If the OAS and Secretary General Luis Almagro are allowed to get away with such politically driven falsification of their electoral observation results again, this threatens not only Bolivian democracy but the democracy of any country where the OAS may be involved in elections in the future.”

“While quantitative evidence was merely one of the findings of the OAS audit report,” the paper’s authors write, “it played—and continues to play—an outsize role in Bolivia’s political crisis. It helped convict Morales of fraud in the court of public opinion. We find that this key piece of evidence is faulty and should be excluded.”

The Times article, however, gives the OAS the benefit of the doubt, allowing the organization — and the head of its electoral cooperation and observation department, Gerardo de Icaza —  to uncritically point to its other allegations of wrongdoing in the election. De Icaza is quoted as saying, “Statistics don’t prove or disprove fraud. Hard evidence like falsified statements of polls and hidden I.T. structures do. And that is what we found.”

CEPR’s 82-page analysis of the OAS Final Report on the audit of the elections notes that the auditing company investigated the “unauthorized” server which was the subject of an alert and determined no data had been altered or manipulated. The OAS’ audit never mentioned the alert or the subsequent investigation. “Falsified” tally sheets, CEPR’s report points out, may in some cases be examples of people assisting with tally sheets in rural or other areas with relatively higher rates of illiteracy or areas where significant numbers of people may not speak Spanish, the only language used for the tally sheets.

“The OAS has already been caught in an obvious lie and failed to correct the record, even after their claims were repeatedly refuted,” Weisbrot said. “Given this, there is simply no reason to accept the remaining OAS claims at face value.”

CEPR’s 82-page report published in March analyzes additional claims made in the OAS’ audit of the elections. The report found that the OAS’ audit did not provide any evidence that alleged irregularities altered the outcome of the election, or were part of an actual attempt to do so. Far from providing a neutral and independent assessment that could have provided greater clarity in the midst of a highly polarized environment, the audit represented an apparent attempt by the OAS to justify its previous actions — including its repeated false claims about an “inexplicable” trend change of the vote. CEPR’s previous statistical findings were replicated and confirmed by two researchers at the MIT Election Data and Science Lab.

Idrobo, Kronick, and Rodríguez compare voting trends in the US with Bolivia, noting that in the US, “Young and nonwhite voters, who tend to vote Democrat, are more likely to cast mail-in and provisional ballots, which are more likely to be counted late. In Bolivia, too, compositional changes likely explain the shift in late-counted votes.” They note “the incumbent’s [Morales’s] vote share increased with time all evening…”

New presidential elections have been scheduled for September 6, 2020. The OAS has once again been invited to observe the vote.