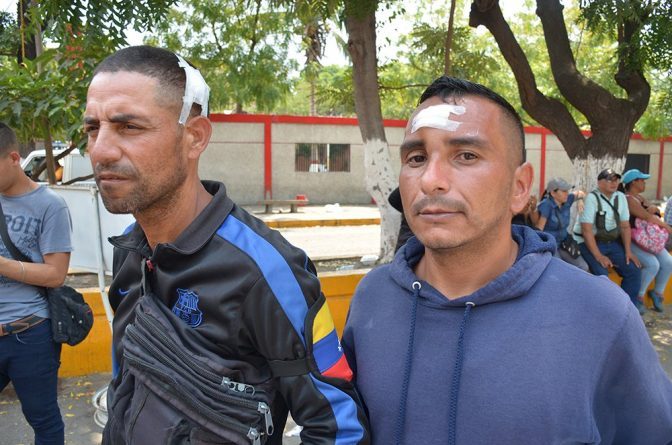 Yesterday, in San Antonio, Venezuela at the Simón Bolivar bridge between Colombia and Venezuela, Freddy Bernal, the Chief Protector of Táchira state, declared victory in thwarting the U.S. government’s latest plot against President Nicolás Maduro and the Bolivarian Revolution.

Bernal said to a cheering crowd of people, including youth, civilian militias, Bolivarian National Guard and FANB soldiers, “We are here to celebrate. Today is a national celebration and each man, each woman, each child should feel proud of what the people did in our Civic-Military Union. Because it was 15 hours of battle at the border and we had not one single loss of life…”

Trump and his officials had created an intense international campaign demanding that Venezuela accept U.S. “humanitarian aid” at key points along Venezuela’s border with Colombia and Brazil.

The Maduro government and pro-revolution masses emphatically reject the demand as interventionist and a Trojan horse operation. They demand instead the immediate lifting of the U.S. sanctions that are causing billions in economic losses to the country.

In days building up to its target date of Feb. 23, U.S. military planes flew in the material to Colombia and Brazil, while the U.S. Southern Command was engaging in military preparation operations in both countries as well as Puerto Rico, Dominican Republic, Colombia, Brazil and several Caribbean islands.

Washington planned two main points of entry with its “aid” into Venezuela at the Tienditas bridge near Ureña and the Simón Bolivar bridge in San Antonio, both at the Colombian border in Venezuela’s Táchira state.

To provide cover, the U.S. imperialists and right-wing Colombian president Ivan Duque staged a propaganda blitz that included a large music concert on Feb. 22 financed by billionaire Richard Branson in the Colombian border town of Cúcuta, facing the Tienditas bridge. The Bolivarian government also held a mass concert on this side.

Their plot was supposed to unfold on Saturday, Feb. 23 with Venezuelan right-wing elements coming to the border at Colombia to accept the U.S. food supplies, as one more proof that President Maduro must be ousted because people supposedly have no food.

Maduro and his officials made clear there would be no intervention into Venezuela and prepared the military and civilian militia defense.

On Saturday morning, the 23rd, I was at the Tienditas bridge with over 1,000 revolutionary Venezuelans, including hundreds of youth who were ready to protect the border.

Bernal marched with hundreds of people to a central point of the bridge, under heavy guard, as the people chanted, “No pasarán!” and “Chávez vive, la patria sigue.” Bernal is an extremely popular figure in the Bolivarian Revolution, who has been individually targeted by U.S. imperialism alongside other leaders including Maduro.

Bernal has been placed in charge of security in Táchira state as Chief Protector, where there is a strong right-wing and paramilitary presence, fueled by major contraband operations between Venezuela and Colombia.

Speaking to the crowd, he denounced a false-positive attack on the Colombian side that had taken place earlier in the morning to blame Venezuela: Two tractor trailers containing the U.S. supplies were firebombed and completely destroyed. Photos of the vehicle carrying the perpetrators suggested the attack came from the Colombian side.

Hundreds of Bolivarian National Guard (GNB) soldiers held forward positions at both entries several hundred yards away from the Tienditas bridge, preventing the fascists from coming near the bridge.

At both bridge sites, these gangs were launching Molotov cocktails and rocks at the civilians and the young GNB soldiers, who had to shield themselves because their orders are not to directly attack the enemy to prevent loss of life. Tear gas was used to repel them, and they kept returning in waves.

In San Antonio where the Simón Bolivar bridge is, there is a narrow road in the town leading to the border. Hundreds of pro-government people and civilian militias were surrounded front and back by the far-right gangs. But they held their ground.

It was 48 hours of guarding the bridge entries and 15 hours of intense struggle until the far-right and interventionists were finally defeated. Unfortunately, four GNB soldiers were burned by the Molotovs and more than 130 people were injured at the Simón Bolivar bridge site.

During the struggle at Tienditas, the GNB soldiers were repelling the opposition and protecting the masses of people in the distance. I was deeply moved by the spirit of the people defending their Bolivarian Revolution.

Fortunately, the fascists did not succeed in breaking through the GNB lines, but many men and women, young and old, were prepared and formed barricades and defense lines. Young men climbed trees to help the soldiers locate where the enemy was. Tear gas drifted in from the main battle lines, stinging everyone’s eyes but no one flinched.

At the end of the day the gangs in service of Trump and Guaidó were driven away. As the young Bolivarian National Guard soldiers marched back to our gathering, they were cheered and applauded. People ran to give them water to drink, their eyes blood red from the intense tear gas they had been enveloped in. They have been deployed for several days.

The danger of U.S. military intervention is growing, whether directly or through its proxies or both.

In fact, in an announcement no doubt directed by his masters in Washington, self-declared coup leader Juan Guaidó called today for “any means necessary” to oust Maduro. His words are seen by many as code for U.S. direct military action.

For now, the economic sanctions are intensifying, with the U.S. government imposing sanctions on several pro-Maduro governors in Venezuela today. At the Lima Group meeting in Bogotá, Vice-President Mike Pence called on all Lima Group governments “…to immediately freeze the assets of PDVSA. Secondly, transfer ownership of Venezuelan assets in your country from Maduro’s henchmen to President Guaidó’s government.”