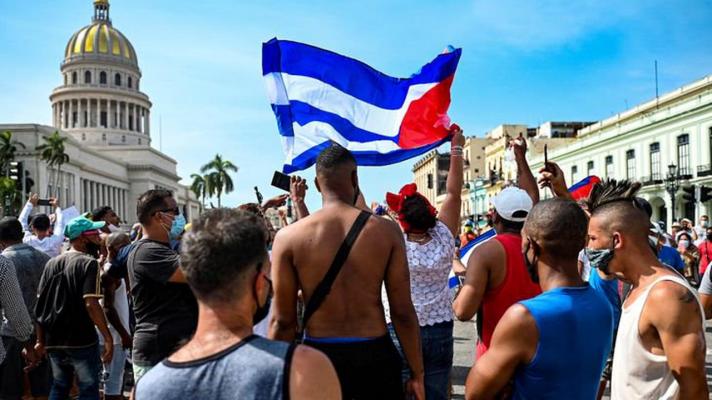 Through what anti-Castroism called the “Civic March for Change,” elements of the soft coup carried out against the Cuban government since 2018 were visibly reactivated. Neither the movements financed from exile in Miami nor the characters who led the calls for protests received the expected outcome. Compared to the events of July 11, 2021, Cuba experienced a calm November 15 (15N), while significant sectors paralyzed by the pandemic were reactivated.

New actors: Archipiélago, a platform created after the protests last July, displaced the San Isidro Movement in the media. Its leader, the playwright Yunior García, denounced alleged government pressure after the planned demonstration was forbidden by authorities. Garcia announced that, to prevent the protesters from being repressed, he had decided to march alone in Havana on Sunday. He did not. The explanation for his absence came from the hands of a journalist from Spanish state news agency EFE, Atahualpa Amerise, who reported through Twitter that García was well, “at home and sleeping.”

RELATED CONTENT: Why is the US fueling the November 15 Cuba protests?

A key piece of information about the promoters of the protest was provided by the president of Cuba, Miguel Díaz-Canel, in a speech before the Central Committee of the Communist Party of Cuba in October: “their public projections and links with subversive organizations or agencies financed by the United States government have the open intention of changing the political system of our country,” he said.

Containment: Protests in Cuba have been highlighted by the deployment of agents trained and financed by the United States, who in turn use apply the strategies of color revolution and unconventional war to provoke “regime” change. On this occasion, the actions that sought to repeat the results of July 11 were clearly contained.

Repeated script: As in all destabilization processes in countries that do not conform to US demands, in Cuba Archipiélago activists claimed that there were “systematic violations of civil and political rights,” in addition to “the worsening of the humanitarian situation, the… economy, and the continued gentrification of the population,” Therefore, the march aimed to demand democratic reforms to the political system of the Caribbean nation.

RELATED CONTENT: Class Warfare and Socialist Resistance: Nicaragua, Cuba, Venezuela as Existential Threats to the US

The contrast: While mainstream media networks prepared to project the protests internationally and allege that repression was taking place, most of Cuba’s regions reported the restart of the school year, the reopening of borders and tourism, progress in vaccination, the Havana Biennial, and other events that marked the transition to the new normal.

The threats: The Biden administration warned the Cuban government that if it prevented the march from taking place, the island could face new economic sanctions. “By refusing to allow such demonstrations, the Cuban regime clearly demonstrates that it is unwilling to honor or defend the human rights and fundamental freedoms of Cubans,” the State Department said in a statement on October 16.

Why it is important: Every “regime”-change operation attacks legitimacy above all else, be it political or legal, but also historical and cultural. In May 2021, the Samuel Robinson Institute published a detailed report on the actors who at that time were leading the call for protests in Cuba. The report warned about the manipulation of the damaging consequences of the blockade on Cuba. According to this classic narrative, economic difficulties were used to disparage the viability of the socialist model, a narrative expanded by the architects of Western propaganda in the wake of the events of July 11 in the island.

Featured image: In Cuba, an attempted color revolution is underway, although it does not appear to be succeeding.