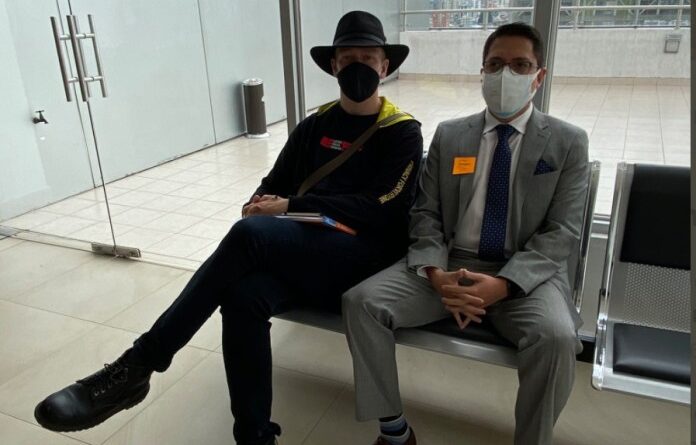 January 21, 2022 (OrinocoTribune.com)—Swedish computer scientist and digital rights activist Ola Bini is being persecuted by the Ecuadorian government and “continues to be until he is declared innocent, which must happen,” asserted the head of Bini’s legal defense, Carlos Soria, as the software developer’s trial began in Quito on Wednesday, January 19. Bini was charged—by the Lenin Moreno government—of a “non-consensual access into the national telecommunications database” of Ecuador.

Bini, who is a well-known advocate for open-source software and digital privacy of citizens, as well as a friend of Julian Assange, was arrested on April 11, 2019, at the Quito airport, as he was set to travel to Japan for a conference. It is worth remembering that earlier the same day, Assange was expelled from the Ecuadorian Embassy in London, upon which the Metropolitan Police arrested him, and since then he has been in the supermax Belmarsh Prison. While Julian Assange is already facing extradition to the United States, Bini’s trial did not start until Wednesday, nearly three years after his arrest.

Despite acknowledged due process violations in #OlaBini's prosecution, and flimsy allegations against him, the open source developer's criminal trial will be held from Wednesday to Friday this week. #FreeOlaBini https://t.co/u3c4KRMnfG pic.twitter.com/Kd4mCqd4W8

“After almost three years, after more than a hundred violations of Ola’s rights, and with the support of more than a hundred national and international organizations including the United Nations, the North American Human Rights System, Amnesty International and WFF among others, we finally have the opportunity to appear before a court, after all the unnecessary delays that occurred, and seek justice, which is all we have wanted from the beginning,” said Soria to journalists outside the North Judicial Complex in Quito, where Bini’s trial is being held.

The entire procedure against Bini has been littered with procedural irregularities and violations of his basic rights, which his defense team has repeatedly denounced. At the time of his arrest, the arresting officials failed to identify themselves, nor was he informed of the charges against him or the reason for his arrest. Despite requests, he was not provided a translator.

Soria pointed out further irregularities in the case, stating that although Bini was sent to prison immediately after his detention, the Moreno government only filed charges days later. “María Paula Romo [Moreno’s interior minister] never filed the complaint that she said she was going to file,” Soria explained, in response to a question about the supposed evidence against Bini. “She never delivered the evidence that she was going to present in the following hours.” Specifically, Romo had claimed that Bini had traveled to London a dozen times to meet Assange at the embassy, and had conspired to blackmail then-President Lenin Moreno over the cancellation of Assange’s asylum, but she never presented any evidence to back up these claims.

In the meantime, Bini was subjected to a “trial by media,” as government officials held press conferences where they displayed computers, hard drives, bluetooth devices, other electronic devices, and books seized from the software developer’s house and alleged that he had conspired with Assange to commit cybercrimes. “Telephone calls were invented with the supposed commission of a crime that never existed,” added Soria. Bini was also smeared as a “Russian hacker.”

However, he had to be released after 70 days of detention, as a habeas corpus decision found his detention to be illegal. In yet another loss of credibility, the presiding judge had to be recused, as Bini’s defense, as well as legal advocacy groups, raised concerns over mistrial due to interference in the judiciary by Moreno’s administration. Even in the subsequent pre-trial process, which finished in June 2021, a second judge was removed due to “prejudiced conduct” and “procedural fraud” causing multiple delays.

In an interview to the news outlet People’s Dispatch after his release from prison, Bini accused the Moreno administration of continued harassment. “My prison sentence has continued,” he said, explaining that he still had to present himself at court every Friday, just to prove that he had not left Ecuador. To make matters worse, Bini also commented that his house was under constant surveillance and that members of his defense team and his supporters had been harassed as well. In his opinion, there were people in Moreno’s government who believed that they could get “evidence” from him to use against Julian Assange.

“He was friends with Julian Assange… but he had no professional relationship with Wikileaks,” pointed out People’s Dispatch journalist Zoe Alexandra. “This [trial] is essentially trying to show that Ecuador is being hard against these people who dared to think differently… It is representative of this rightward shift of the Ecuadorian government.”

Zoe Alexandra also drew attention to the alignment of the Ecuadorian government with US government policies regarding data and cyberspace. “The US government loves to have their own privacy about their information, but of course they want to have complete access to citizens’ information,” she remarked. She went on to highlight how “Ola’s work in helping people protect their personal information… a valid and really important work that he was doing to help people understand what’s at stake—understand the encroachment of tech companies and what this means for all of us as citizens of this world; so this trial is definitely part of a pushback against activists who are just trying to understand this digital space that is constantly changing.”

Now, as the procedure goes on, a representation from the Regional Foundation for Human Rights Advisory (INREDH) and the Observatory of Rights and Justice (ODJ), and a number of rights groups and journalists have attended the trial, and will continue to be involved in the matter to ensure that no further irregularities occur. His supporters demand that all charges against him be dropped, as there is every possibility that otherwise the case would be dragged out to make Bini and everyone around him suffer, as a warning to all digital rights advocates, in a process similar to the show trial against Julian Assange.