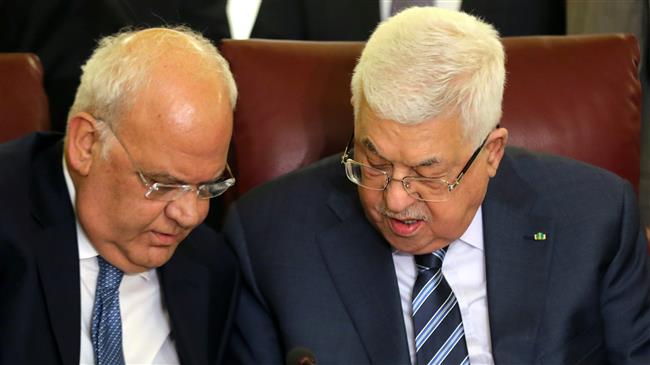 The Palestinian Authority stops recognizing all ties with the United States and Israel after the US announced the long-awaited outline of a controversial pro-Tel Aviv scheme, which Washington claims seeks to resolve the age-old Palestinian-Israeli conflict.

“We are informing you that there will be no relations with you (Israel) and the United States,” Palestinian President Mahmoud Abbas told an Arab League meeting in Cairo on Saturday.

Palestinians had already stopped recognizing any intermediary role by the US in late 2017, when President Donald Trump took all his predecessors’ pro-Israeli measures to a whole new level by recognizing the holy city of Jerusalem al-Quds in the Tel Aviv-occupied West Bank as Israel’s “capital.” The move by Washington came in the face of historic Palestinian demands that the city’s eastern part serve as the capital of their future state.

Commenting further on his decision, Abbas said the ties that would be affected include any standing “security cooperation” between Tel Aviv and the Palestinian Authority.

The Israeli regime has historically considered the security coordination to be a means of preempting Palestinian retaliation against its incessant acts of aggression. Israel would have to “bear responsibility as an occupying” entity for the Palestinian territories, the PA chief added.

Abbas said the decision follows the US and Israel’s “disavowal of signed agreements and international legitimacy.”

He added that the US plan, dubbed “the deal of the century” was in “violation of the [autonomy] accords,” referring to the Oslo Accords.

The accords were signed by late leader of the Palestine Liberation Organization, Yasser Arafat, and former Israeli prime minister Yitzhak Rabin in Washington DC, in 1993 and Taba, Egypt, in 1995. The purported goal of the accords was to achieve peace based on the United Nations Security Council resolutions 242 and 338, and to realize the right of the Palestinian people to self-determination.

The US had announced the so-called deal of the century — a brainchild of President Donald Trump’s son-in-law and advisor Jared Kushner and other key pro-Israeli figures — years ago, but had withheld the details.

Trump revealed the general provisions of the scheme on Tuesday, with Israeli Prime Minister Benjamin Netanyahu at his side. Palestinian sides were conspicuous by their absence at the ceremony given their vociferous disagreement with the plot.

Under the scheme, the US would continue to recognize Jerusalem al-Quds as Israel’s “undivided capital,” Trump said, endorsing his 2017 move concerning the city.

He said the deal featured an economic portion that earmarks $50 billion in monetary allocations to Palestinians, Jordan, and Egypt. Palestinians have denounced this as a means of bribing them into selling their rights.

Still contentiously, Trump said that the Israeli settlers, who have been housed in illegal apartment blocks since Tel Aviv’s occupation of the West Bank in 1967, would not be moved under the deal — something that amounts to annexation of the land on which the settlements have been built.

The US president, meanwhile, alleged that Israel would be freezing its settlement activities for four years “while Palestinian statehood is negotiated.” Tel Aviv has never fully committed to such freezes, causing any negotiation process to break down.

Countering Trump, however, Abbas insisted that Palestinians would press ahead with their legitimate struggle using peaceful means.

According to Palestinian UN envoy Riyad Mansour, the PA chief would be speaking at the UN Security Council in the next two weeks about the US plan.

The envoy also said he hoped that the 15-member Council would vote on a draft resolution against the scheme.

However, Washington, which has unexceptionally used its veto power in favor of Israel at the Council, is almost certain to cast its veto against any such resolution too.

The Palestinians would then take their objection up with the UN General Assembly, where Washington cannot strike down any unanimously-approved resolutions.