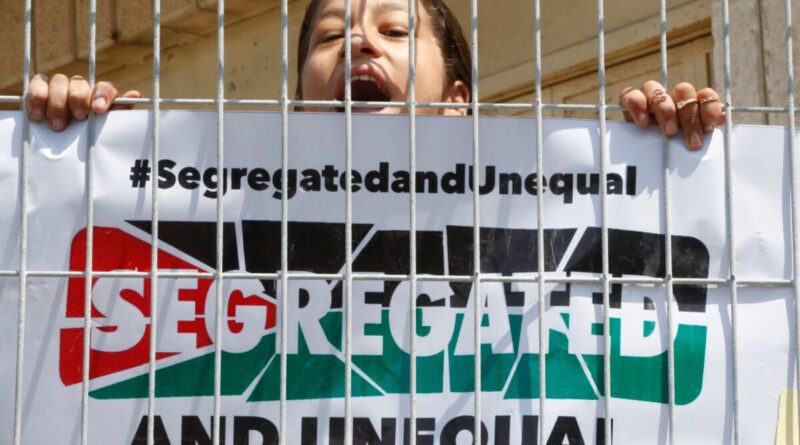 In 1965, Syrian-Palestinian academic and diplomat Fayez Sayegh wrote a groundbreaking monograph called Zionist Colonialism in Palestine. The short booklet was published by the PLO Research Centre in Beirut.

It is a model of clarity and precision. The fact that most of what it explains still very much applies today is a sad commentary on how much Israel has been allowed to get away with over the years, and how little has changed in the fundamental facts about its military occupation and the Palestinians’ dispossession and expulsion.

Sayegh’s booklet includes the basic history of the Zionist movement, how it made an alliance with British imperialism, and how it took over Palestine and stole the country from its indigenous people, the Palestinians. Chapter three explains the nature of the settler-state and how racism is part of Zionism’s fundamental character, not some sort of flaw which mysteriously crept in later. One of its most striking sections reads:

…in its practice of racial discrimination against the vestiges of Palestinian Arabs, the Zionist settler-state has learned all the lessons which the various discriminatory regimes of white settler-states in Asia and Africa can teach it. And it has proved itself in this endeavour an ardent and apt pupil, not incapable of surpassing its teachers. For, whereas the Afrikaner apostles of apartheid in South Africa, for example, brazenly proclaim their sin, the Zionist practitioners of apartheid in Palestine beguilingly protest their innocence!

This is one of the earliest mentions of the Afrikaans word apartheid in connection with Israel. It is striking that this comparison was made by a Palestinian intellectual. Later, Israeli dissidents like Uri Davis and Palestine solidarity activists in the West started to use the word.

Israel and its global lobby fought back, organising a campaign of smears and defamation against anyone who used the word, describing them as “anti-Semitic”. Labour Party activists who did so were – and still are – very much in danger of being suspended and expelled.

Although Palestinians have been saying that Israel is an apartheid state for decades now, it was only this year that “mainstream” Western human rights groups began to finally catch up. In January, the Israeli human rights group B’Tselem stated in a new position paper that Israel is an apartheid state: “There is one regime governing the entire area and the people living in it, based on a single organising principle,” said B’Tselem. “The Israeli regime implements laws, practices and state violence designed to cement the supremacy of one group — Jews — over another — Palestinians.”

And now, this week, even Human Rights Watch has finally admitted the truth. In a new report, the group said that Israel is guilty of the crime of apartheid, which is defined by international law.

Israel, said HRW, has “pursued an intent to maintain the domination of Jewish Israelis over Palestinians throughout the territory it controls.” The group called for the International Criminal Court to investigate Israel over its apartheid practices, a call long made by Palestinian human rights groups such as Al-Haq.

Human Rights Watch is in many ways not a principled or exemplary organisation. Its reports tend to be disproportionately focused on official enemies of US imperial power. Some of its leaders have even pushed for regime change wars and sanctions against such countries.

However, if even Human Rights Watch is now finally admitting the truth of what Palestinians have been saying all along, then it is a sign that it is going to become increasingly harder for Israel and its advocates to deny the obvious truth.

There was a small indication of that on Tuesday when British pro-Israel group the Board of Deputies of British Jews posted this statement on Twitter, shamelessly whitewashing Israeli apartheid. The group defended “Israel’s security measures”; called apartheid a “slur”, and accused Human Rights Watch of authoring “a sham” report.

The responses to the Board of Deputies on the social media platform were absolutely scathing, and almost entirely critical of the organisation and its hypocrisy.

Sad to see an important British Institution being reduced to little more than an extension of the Israeli Embassy in London https://t.co/10FX09HQRa

The truth always hurts when you are on the side of the oppressor!

We WILL win this war to end apartheid & history will condemn all those who supported it!#NoSurrenderToIsraeliApartheid

An absolutely disgusting response to the report from Human Rights Watch, and I ask what the reaction would be if any British Islamic body defended the human rights abuses by Saudi Arabia.

I imagine they’d be being called terrorist apologists by now.

Labour must condemn this. https://t.co/m0RRWzjziR

why is the bod of *british jews* obsessed with israel? https://t.co/jcy1zphuJ0

Twitter outrage will not end the Board’s dedication to the apartheid, Zionist state of Israel. It is a good sign, though, because outrage against this particular pro-Israel lobby group’s promotion of a racist state is growing.

Palestinians told us that Israel was following the apartheid path decades ago. Perhaps more people should have believed them then, rather than having to wait for the fact to be confirmed by Western human rights groups.

Featured image: A girl shouts slogans during a demonstration organised by young Palestinians in Hebron on September 3, 2017, against a recent decision by Israel to boost the powers of the settlers in the occupied West Bank city [HAZEM BADER/AFP via Getty Images]