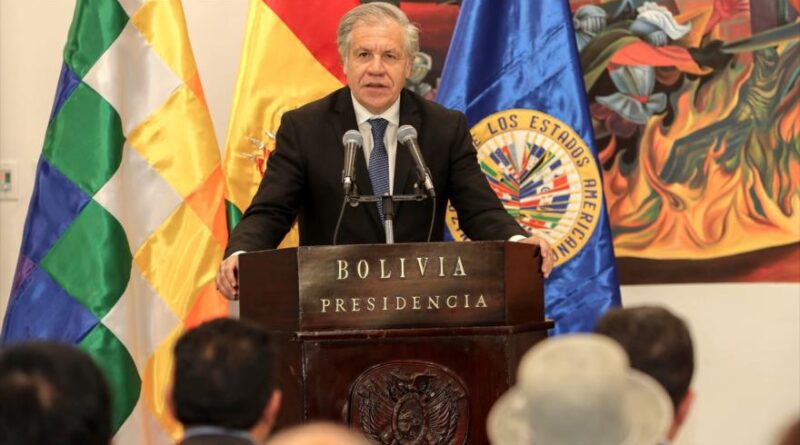 The Parliament of South America (PARLASUR) seeks to investigate the Secretary General of the OAS, Luis Almagro for his role in the crisis in Bolivia in 2019.

“We are going to work so that the secretary general [of the Organization of American States (OAS), Luis Almagro] is investigated,” the president of PARLASUR, Óscar Laborde, confirmed this Saturday in an interview broadcast by the Uruguayan radio station Illimani.

The official of the regional legislative body has stressed that Almagro would be investigated for his accusation of electoral fraud in the presidential elections of October 2019 in Bolivia.

This is because so far the OAS has not presented any evidence of the alleged electoral fraud in Bolivia, an allegation that caused a social crisis and led to the resignation of then-President Evo Morales, added Laborde.

According to the president of PARLASUR, the work of the OAS in the Bolivian elections last year was “a shameless thing without rhyme or reason,” and therefore it must be investigated to avoid its repetition in other electoral processes in the countries of Latin America.

Laborde has also expressed his hope that the hemispheric body (OAS) will recognize the “terrible mistake it made to subjugate Latin America and the Bolivian people.”

In the framework of the observation mission for the 2019 presidential elections in Bolivia, the OAS published a misleading preliminary audit report in which it stated that Morales had not obtained enough votes, thus plotting a fraud.

With the victory of the Movement towards Socialism (MAS) in the presidential elections in Bolivia in October this year, criticism has increased against the hemispheric body and its president regarding their role in the coup against Morales.

In fact, in October, senator Óscar Andrade of the Frente Amplio (FA) party of Uruguay denounced the Secretary General of the OAS for “distorting” the favorable outcome for former President Evo Morales in the 2019 elections and for declaring that “there was a fraud.”

The same month the former Minister of Productive Development of Bolivia, Ana Teresa Morales asserted in an interview with HispanTV that the triumph of Luis Arce in the Bolivian presidential elections of October 2020 highlighted the falsehood of Almagro’s complaint about fraud in the 2019 presidential elections.

Arce won the elections with 55.1% of the votes polled, well above the 28.8% of his immediate rival Carlos Mesa from the Citizens Community (CC). The victory of the MAS party was a serious setback for the United States, since it came 363 days after the coup d’état against Evo Morales orchestrated by the opposition and supported by Washington.