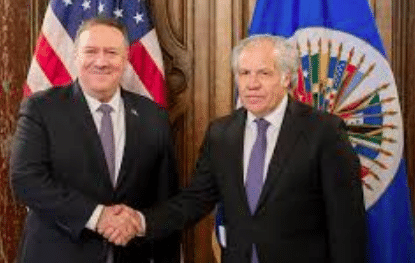 The Government of the Bolivarian Republic of Venezuela—through a communiqué—expressed its categorical rejection of the infamous report presented on December 2, 2020 by the Secretary General of the Organization of American States (OAS), Luis Almagro, which questioned the work of the International Criminal Court (ICC).

“Venezuela rejects the report presented by Almagro, in which he intends to establish himself as an international tribunal questioning the work of the ICC. We recall that the OAS does not have these powers and that Venezuela is not a member state of this stagnant organization,” the Foreign Affairs Minister of the Bolivarian Republic of Venezuela, Jorge Arreaza, posted on the social media network Twitter.

The statement issued by the Bolivarian Republic of Venezuela details that the report is intended to interfere in a biased, extortionate and unacceptable manner in the functions of the ICC by ignoring its legal authority.

The National Executive reminds Almagro that the OAS does not have jurisdictional powers to establish itself as an international human rights court “or to collect information that leads to the determination of international criminal responsibilities in any of its member states.”

It should be noted that Venezuela is not part of this body, after denouncing the OAS Charter in April 2017.

The OAS Secretary General intends to apply his policy of chaos and violence in the Venezuelan territory a few days before the parliamentary elections, just as he did in Bolivia in the 2019 coup.

Below the communique’s official translation:

Bolivariana Government firmly rejects the report presented by Luis Almagro on the ICC
The Government of the Bolivarian Republic of Venezuela expresses its firm rejection of the infamous report presented on December 2nd, 2020, by Luis Almagro, with the objective of questioning the work of the International Criminal Court, on the basis of unsubstantiated defamations regarding human rights in Venezuela. The individual acting as Secretary-General of the stagnant OAS does not miss an opportunity to show his disdain for human rights and to apply blatant selective double standards, for merely interventionist purposes.

The aforementioned report, which was elaborated without any kind of verification on the ground and from secondary sources that do not constitute evidence of the alleged facts stated, seeks to interfere in a biased, extortionary and unacceptable manner with the independent functioning of the International Criminal Court, by disregarding its legal personality, functions and powers. Luis Almagro and its henchmen forget that the members of the Office of the ICC shall not seek or carry out instructions from sources outside that body, as provided for in Article 42 of the Rome Statute.

In this sense, the published document, lacking any legal basis in relation to the situations of human rights in Venezuela, constitutes an evident propaganda operation against the Venezuelan institutions and their authorities, while confirming before the international community the unfortunate and recurrent practice of the worn-out Secretary-General of the Organization of American States, by exercising recurrent actions that violate the OAS Charter, its internal regulations, the most elemental principles of international law, and that also lacks the necessary unanimous mandate of the Member States of that Organization.

The Government of the Bolivarian Republic of Venezuela recalls that the OAS and its Secretariat do not have the jurisdictional competence to set itself up as an international human rights court or to gather information that could lead to the determination of international criminal responsibilities in any of its member States. Much less in Venezuela, a State that, upon denouncing the OAS Charter in April 2017, and after the expiration of the foreseen periods of time, is not a member of that Organization, nor will it ever belong to it again.

A few days before the parliamentary elections, Luis Almagro is at the forefront of the offensive against Venezuela, trying to generate chaos and violence, as he did in Bolivia with the coup d’état of 2019. However, next Sunday, December 6th, the Venezuelan people will give another lesson of democratic sovereignty to the OAS Secretary-General, as well as to any external actor that pretends to intervene in the internal affairs of Venezuela.

Featured image: OAS’ Luis Almagro, accused by many of being on the U.S. Department of State payroll. File photo.