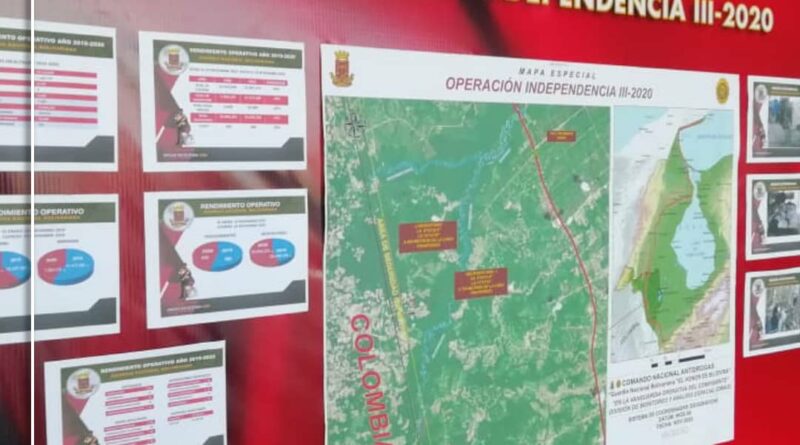 December 19, 2020. Officials of the Bolivarian National Armed Forces (FANB) and the National Anti-Drug Office (ONA) executed the Anti-Drug Border Operation Independence III-2020 (Boquete III 2020) in the Jesús María Semprúm municipality of Zulia state, by taking over the location and dismantling two structured camps with 20 laboratories and 6,500 kg of cocaine and coca base paste a few meters from the border with Colombia.

This was reported this Saturday by the head of the ONA, Brigadier General Alberto Matheus, in a press conference held in the state of Zulia, together with the Commander of the Western Integral Defense Strategic Region (REDI), Major General José Moreno Martínez, and the head of the National Anti-drug Command of the Bolivarian National Guard (GNB), Division General José Ramón Castillo, who was in charge of the operation deployed from December 13 to December 18 in the region.

The action was directed by the Strategic Operational Command of the FANB (CEOFANB) from the Western Integral Defense Region (REDI) and was carried out by the National Anti-Drug Command together with the Air Command, Zone Command No. 11 of the GNB and the National Anti-drug Office.

Matheus explained that the officials entered the Jesús María Semprúm municipality, located close to the border with Colombia, the largest drug producing country in the world, where they managed to disable five unauthorized runways and two aircrafts that had previously been disabled by the Integral Aerospace Defense Command (CODAI), in addition to destroying 22,600 liters of jet fuel JET A1 found at the site.

Matheus stressed that despite the permanent US siege against Venezuela and the COVID-19 pandemic, public policies on drugs have been effectively implemented thanks to the civic-military-police union in conjunction with the ONA, which have resulted in seizures of a total of 45,829,093 kilograms of various drugs in 2020, thus exceeding the seizures made each year over the last five years since 2015, Matheus estimated.

“From the citizen security organizations, the FANB and the ONA, a frontal fight is being maintained against transnational criminal organizations that intend to use Venezuelan territory to transport large caches of drugs produced in Colombia and destined for the largest consumers, the United States and Europe,” he stressed.